Standing above the entrance to a cave in southern Indiana, I prepared to descend, rigging to a rope my team and I had dropped into the 30 foot pit. I had come to conduct my biannual census of the endangered Indiana Bats (Myotis sodalis) that hibernate there each winter. Listening to the roar of trucks and cars on the nearby interstate highway, I was struck by the thought that thousands of people drove past that cave every winter, oblivious to the bats or their plight. Few people know about endangered bats and fewer still care. And yet I was about to witness one of the most spectacular sights of my career in biology: a living tapestry of irregular shape, 20 feet long and 10 feet across, composed of animals so tiny that I could cup one entirely within my closed hand. The bats were arrayed on the ceiling of a ledge so cramped that I had to take great care not to dislodge them as I crawled beneath to measure their cluster and census them.

Usually, about one fourth of the Indiana Bats that hibernate in this cave form the same cluster in the ledge area. The rest are nearby, their clusters extending into a large room. I have been in awe of this particular cluster since I began censusing the cave four years ago, and I always come away a bit humbled. Despite our ability to count them, to weigh and measure them, to record the temperature at their roost site, or whatever other physical parameters we care to examine, we still do not know some of the most fundamental things about them. How far did they come, where did they spend the summer, what habitats do they use and need and what threatens them there, how did they find this particular cave, what would they do if it became unavailable to them, and an entire host of other questions concerning their biology and behavior remain to be answered.

I was on my way down to count these endangered bats, but it is they who are on the way down. Even our best efforts to date, I still counted fewer Indiana Bats rangewide than I did two years before. I have conducted this census three times now, and each time, despite individual fluctuations among the caves, gains at one have been more than offset by losses at another; the result has been continued decline.

Causes of decline
The Indiana Bat is a medium-sized member of its genus and weighs less than a third of an ounce (6 to 9 grams). No subspecies are recognized. They are found through out much of the eastern half of the United States, with the largest hibernating populations found in Indiana, Missouri and Kentucky. The species is extremely vulnerable due to its penchant for aggregation; fully 85% of the entire known population winters in only seven caves.

Indiana Bats have been little studied and, until very recently, poorly known even in terms of their distribution, abundance and status. The work of early investigators was limited to the hibernation caves used by the species, and only since the mid-70's has anything been learned about their summer distribution and ecology.

One of the first species in the United States to be recognized as endangered, the Indiana Bat has received legal protection as such since the passage of the Endangered Species Act of 1973. It is endangered primarily due to the direct and indirect actions of man. The most serious known cause of decline is human disturbance of hibernating bats. Once in hibernation, bats must conserve their body fat supplies until spring or face starvation. When aroused from hibernation, they can expend 10 to 30 days of these limited reserves.

Vandalism and direct destruction of roosting bats have been documented as well. Improper gating of cave entrances and construction for cave commercialization have altered cave microclimates, rendering some caves unsuitable for Indiana Bat hibernation.

Other human-related factors that have been implicated in the decline of the species include habitat changes such as stream channelization and bank modification, forest clearing and alteration, agricultural development and indiscriminate collecting. Although pesticide poisoning of Indiana Bats has not been documented, other North American bats in agricultural habitats have declined due to the effects of pesticides, and it is likely that the species suffers at least some level of contamination. Natural phenomena associated with Indiana Bat declines include flooding of hibernacula, freezing during severe winter weather, and collapse of mines occupied for hibernation.

Habitat
Indiana Bats hibernate in large, densely packed clusters of about 300 bats per square foot in caves or mines that have stable winter temperatures below 50 F, with the preferred temperature being 39 to 46 F. Specific roost sites that provide this climate are selected and used from year to year. Usually the majority of bats will be found just beyond the twilight zone of the hibernation cave, but this varies with time of season and configuration of the cave. Only a small percentage of the available caves provide for the Indiana Bat's specialized requirements. For example, only 24 of Missouri's more than 4,700 known caves ever have contained hibernating colonies larger than 100 Indiana Bats.

Recent studies indicate that Indiana Bat maternity colonies are formed mostly in riparian and floodplain forest near small to medium-sized streams, although bats also have been found along tree-lined drainage ditches and in upland sites. It may be that this apparent pattern is more a function of habitat availability than of the species' actual preference. Clearing for agriculture has restricted forest habitats largely to riparian zones in their summer range. To date, few maternity roosts have been studied. Of these, three have been in riparian habitat and one was in an open, pastured woodlot. Roosts also have been found in the hollow of a tree and behind loose, exfoliating bark of both dead and living trees.

Optimum summer habitat must include mature trees, both to provide roost sites and because Indiana Bats forage around the crowns of large trees. Preferred stream habitat appears to consist of streams lined on both banks with mature trees that overhang the water by at least ten feet. Streams without riparian vegetation do not appear to be suitable. Upland forest with a well-developed canopy but poorly developed sub-canopy layer also appears to provide summer habitat.

Ecology and behavior
Indiana Bats are insectivorous. More than eight orders of insects have been identified in studies o their habits. Moths (order Lepidoptera), beetles (Coleoptera), and flies and midges (Diptera), are preferred prey.

Indiana Bats are active from April through October, migrating seasonally between their summer roosts and hibernation caves. Summer colonies begin to disperse in August, and migrants return to their hibernacula in the months from August through October. The females enter hibernation first, followed by the males. It is during this time that mating takes place. Females store the sperm until spring, when ovulation and fertilization occurs.

In the yearly cycle, females leave the hibernacula first, in late March or early April. Males follow, but their exit is spread over a longer period, and some remain near their hibernation caves throughout the summer. Pregnant females migrate to their maternity roosts, arriving in early to mid-May where they form colonies of 50 to 100 individuals. The young, one per female, are born in June or early July. Males may migrate as well, but like most other species of bats, generally do not roost with the females and young during the nursing period.

Preservation efforts
An Indiana Bat/Gray Bat Recovery Team was assembled in the 1970's. The Recovery Team's responsibilities include advising the U.S. Fish and Wildlife Service (USFWS) of actions deemed necessary to preserve these endangered bats. Among these are monitoring the populations, cave protection, public education, and others. Actions for the Indiana Bat to date have centered on the hibernation caves.

The Team separated caves known to harbor Indiana Bats into several classes based on population sizes. The most important (Priority 1) caves, of which there are eight, recorded populations of 30,000 or more bats each. The second category (Priority 2) contained populations above 1,000 but less than 30,000. All of the Priority 1 caves are or soon will be in public ownership, and of these six are gated or fenced and the other two will be protected in the near future. Many of the Priority 2 caves are protected as well.

Since 1983, I have censused seven of the eight Priority 1 caves on behalf of the USFWS (one is an extremely dangerous abandoned mine that cannot be censused). We elected to have only one person census these caves in order to reduce observer bias, thus attempting to ensure that population trends noted in the census were real. Regular censusing did not begin until the 1980's and was not standardized until 1983. Over that time span, the Indiana Bat has declined by 55% in these caves. The situation in the Priority 2 caves in several states is similar, with notable exceptions in Indiana and Kentucky. Despite efforts to protect this species during hibernation, the population has continued to decline.

The future
Overall, the prognosis for the Indiana Bat is not good. We must gain a better understanding of the rest of its life cycle, learn what factors besides the known hibernation-associated ones are contributing to the species' decline, and correct them. A radio telemetry study of a maternity colony is getting underway in Illinois and may help provide answers. Research is needed throughout the principle summer range of the Indiana Bat to determine its habitat preferences, whether or not summer habitat is a limiting factor, and what threats there are to its existence during the non-hibernation period (particularly from pesticides).

I hope that in the future when I go down to census Indiana Bat populations, the trend is reversed and I can chronicle the rebound of this endangered bat. There still is time, and the mechanism (the Endangered Species Act) is in place to accomplish it, but if the Indiana Bat continues to be "down for the count," the species could be knocked out completely.

(bio)
Richard L. Clawson has been a Wildlife Research Biologist for the Missouri Department of Conservation since 1977. He has been a member of the Indiana Bat/Gray Bat Recovery Team since 1980 and team leader since 1984. 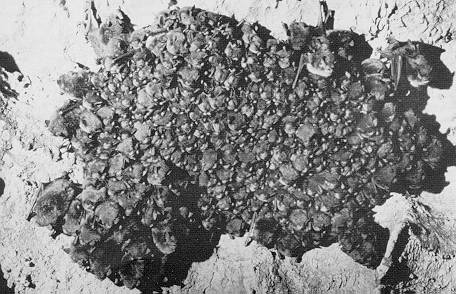 A cluster of hibernating Indiana Bats forms an irregular shape against the ceiling of their cave roost, approximately 300 in a square foot.
PHOTO BY MERLIN D. TUTTLE 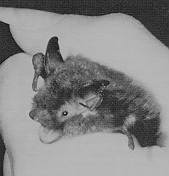 Indiana Bats are so small that one can fit within a closed hand.
PHOTO BY MERLIN D. TUTTLE 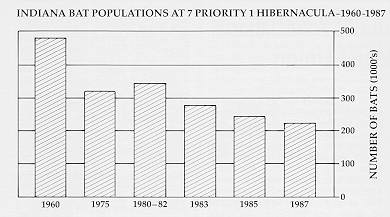