Bill Walker, a founding trustee of BCI, died of cancer on August 4, 1996 in Austin, Texas. He was born in Nelsonville, Ohio on May 2, 1922. Bill loved wildlife and was a friend to all who knew him. He fought in the Battle of the Bulge as an Army sergeant and, because of his brilliant sales ability, was appointed President of Bacardi Imports in 1979 and Chief Executive Officer three years later.

For a decade, beginning in 1983, Bill served on our Board of Trustees, contributing greatly through his wise leadership and corporate financial assistance. In 1984, he convinced Bacardi to print and distribute a million bat conservation brochures which played a key role in BCI’s early efforts to change people’s minds about bats. In 1988, he funded and oversaw production of a New Yorker ad that tripled BCI’s membership. Later the same year, he convinced Bacardi to underwrite the publication of Merlin Tuttle’s book, America’s Neighborhood Bats.

Bill is survived by his wife, Jane D. Walker, two sons, and three grandchildren. Bill was a generous and respected friend to all who knew him and a deeply appreciated mentor to Merlin Tuttle in the critical early years at BCI. 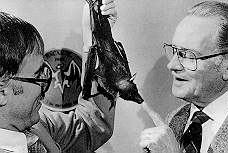