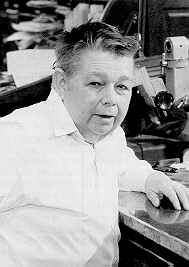 Karl Koopman, the world‘s leading authority on bat distribution and taxonomy and a founding member of Bat Conservation International, died of natural causes September 22 in his Manhattan home at the age of 77. He was born in Honolulu, Hawaii, and lived as a child in Los Angeles, where he furthered his love of science through frequent visits to the Los Angeles County Museum of Natural History. He earned a B.A. and Ph.D. in zoology at Columbia University, and in 1961 he joined the staff of the American Museum of Natural History, where he spent the next 36 years. For the past 11 years since his retirement, he served as Curator Emeritus.

I first met Karl in 1962 when we shared a tent for three months on the Uruguayan Expedition of the American Museum of Natural History. On his first morning in camp, he was stung by at least 20 wasps and was miserably cut and scratched by saw grass and briars, yet he never lost his sense of humor. Frequently while sitting around a campfire, or traveling between destinations, expedition members would try to find some subject on which Karl was uninformed. Doing so turned out to be a daunting task. Karl was gifted with a photographic and encyclopedic memory. Even in the rare instances when he was truly stumped, he could resort to scientific jargon so far beyond our abilities that we were still impressed. I have always treasured the opportunity I had to learn from Karl on that expedition.

Karl was acclaimed by all who knew him as the most technically knowledgeable bat biologist of his time, and probably of any time. His memory of scientific literature was simply unbelievable, and many of us relied on it when computer literature searches failed us. His impact on the field of bat biology was profound, as evidenced by his having received the highest awards attainable in the fields of both mammalogy and chiropteran biology.

He published his first scientific publication in 1950, a classic in the field of genetics that is still cited. It was followed by a series of more than 95 scientific publications–the last two published just last year–mostly on bat biogeography and systematics, including major faunal analyses of the bats of Africa, Australia, New Guinea, and South America. Karl was clearly one of a kind, the last chiroptologist to study and understand the systematics and distribution of bats worldwide.

He attended the first Annual North American Symposium on Bat Research–and every subsequent one for 26 consecutive years–and was an enormous help to students and colleagues alike. He always sat on the front row, had an opinion, and typically began the first question after each paper presentation with "Weeeell, it seems to me that . . ." He remained active throughout his life, both in research and in sharing his enthusiasm and knowledge with others. Those lucky enough to sign up for BCI‘s 1995 ecotour to Belize got to see him in action at the age of 75. No one who knew Karl will ever forget him, nor will the field of chiropteran biology ever be the same without him. He was a true, one-of-a-kind friend of bats and a zealous conservationist.

In memory of Koopman‘s countless contributions to the study and conservation of bats, BCI has established an award in his name. Each year, BCI‘s Karl F. Koopman Scholarship will go to the student with the highest-ranked research proposal from among our many applicants.