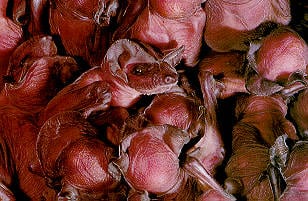 Mexican free-tailed bats (Tadarida brasiliensis) are born hairless, already weighing up to a third of their mother’s weight. For up to an hour or so after birth, the baby remains attached to its mother by the umbilical cord, preventing it from falling while mother and baby become familiar with each other’s scent and vocalizations. Mothers roost separately from their babies who cluster tightly to maintain warmth, sometimes at 500 per square foot. Remarkably, each mother finds and nurses her own baby amidst the mass of pink bodies vocalizing for attention.

These bats of the American West and Southeast give birth to a single young from mid-June to early July. At least half won’t survive their first year, and in the absence of human interference, colony numbers tend to stabilize with normal mortality from old age.

Young will first learn to fly in four to five weeks.