Throughout its history, BCI has been privileged to work with many conservation-minded state agencies in the U.S. The Illinois Department of Natural Resources (DNR) Division of Natural Heritage has been one of the most active and has been a BCI partner in conservation initiatives for more than a decade.

Joe Kath, endangered species project manager with the DNR, has made bat conservation priority for the agency. “We’ve had an opportunity to identify critical habitat areas in Illinois,” said Kath. “Many of the goals I’d set as career goals have already been reached, and much of our success is due to partnerships with other organizations, private individuals and industry. We’ve been fortunate because we’ve had an opportunity to work with great people.”

When Kath reviewed Illinois’ list of critical hibernation caves and mines, Unimin Specialty Minerals Corporation became an important partner. In collaboration with BCI, the first gate was installed at Unimin’s Magazine Mine in 1996 when only 100 bats were present. In February 1999, volunteers from the DNR, the U.S. Forest Service, U.S. Fish and Wildlife Service, and Unimin Corp. joined in the effort to map and once again survey the mine. “It took two full days,” said Kath. “We discovered approximately 12,000 bats of five different species hibernating in the mine. About 75 percent of those were Indiana bats (Myotis sodalis), making this mine the largest Indiana bat hibernation site ever documented in the state of Illinois. I added the numbers over and over, because I couldn’t believe what I was seeing.” The Illinois DNR is now participating in BCI’s long-term study of Indiana bat sites, monitoring temperature and humidity at the Magazine Mine in hope that this success story can be duplicated at other critical roosts.

The Illinois DNR’s next challenge will be to gate a second entrance at Magazine Mine. “This is a silica sand mine, which is very fragile,” said Kath. “Without intervention, the main entrance will eventually collapse on itself. It might be five years from now, or it might be 50 years, but it will happen.” Engineers have designed solid steel arches, such as those used in coal mines, to reinforce the entrance, but the design will cost up to $100,000. Kath hopes to meet his fundraising goals in time to start gating by early summer 2001.

Illinois’ conservation efforts also include partnerships with private landowners. According to Kath, almost 99 percent of the Illinois landscape is privately owned. “One cave on private property had been identified as a critical Indiana bat hibernation site,” said Kath. “However, no one had pursued conservation because of the landowner’s reputation as ‘difficult’. As it turns out, that reputation was undeserved, and the landowner is one of the nicest, most cooperative people in the state.” Kath and his associates visited with the property owner, who shared the cave’s history, as well as his concerns about liability and trespassing. “When I offered to install a bat-friendly gate that would reduce his liability and keep trespassers out, he jumped at the opportunity,” said Kath. The cave was permanently protected in September 1999, and the population that had slowly decreased due to vandalism now has a chance to recover.

Kath also volunteers as chair of the Northeastern Bat Working Group. The group’s members, representatives from 22 states, are developing conservation priorities for the region’s bats. He also serves on the executive steering committee for the North American Bat Conservation Partnership, which develops conservation strategies at a continent-wide level. In these groups, biologists, cave enthusiasts, educators, government agencies and conservation organizations are working together to share information and resources. “We still have a lot of work to do for bat conservation,” said Kath. “But the progress we’ve made shows us just how far we can come in a short period of time if we work as partners.” 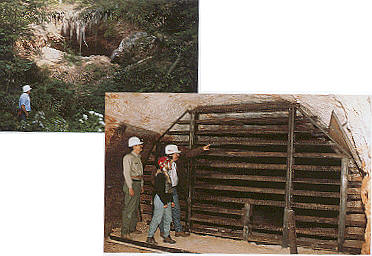 Unimin’s Magazine Mine houses Illinois’ largest known population of endangered Indiana bats. The photo above was taken prior to installation of a bat-friendly gate in 1996.

The Illinois Department of Natural Resources worked with Ray Smith from the U.S. Forest Service, Sheryl Ducummon from BCI, and Siebert Crowley from Unimin, to install this gate at Magazine Mine.