Latest on Bats & COVID-19
Home News Bats Magazine Volume 7, Issue 2 If you have bats in your bat house and want to know what kind they are

Throughout the northern two-thirds of the United States and Canada, the Little brown bat and the Big brown bat would be the most commonly encountered. In general, any species that naturally roosts in buildings or under bridges is a candidate for a bat house. Here are some of the most likely:

COMMON NAME: Big Brown Bat
SPECIES: Eptesicus fuscus
HABITAT: Most of the U.S. and Canada. Found in tree hollows and buildings. Hibernates in caves, abandoned mines and sometimes buildings. This is one of the most common and widespread North American bats.

COMMON NAME: Little Brown Bat
SPECIES: Myotis lucifugus
HABITAT: Wooded areas throughout most of Canada and the northern half of the U.S., except desert and arid regions. A few isolated populations farther south. Found in tree hollows and buildings. Travels to nearest suitable cave or abandoned mine for hibernation. Along with the Big brown bat, this is one of the species most commonly found in bat houses.

COMMON NAME: Cave Myotis
SPECIES: Myotis velifer
HABITAT: Southern Arizona and New Mexico into West Texas and Oklahoma, and extreme south central Kansas. Forms large nursery colonies and throughout its range is found in more caves than any other species. Also rears young in smaller groups in buildings, often in crevices. The eastern subspecies hibernates in caves, but the winter habitat of the western subspecies is unknown. 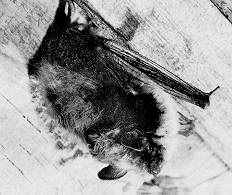 Little brown bats are among those species most often reported in bat houses. PHOTO BY MERLIN D. TUTTLE