I lay on my back beneath the trees at the edge of a swamp near Kuala Selangor, Malaysia. The milky odor of tens of thousands of durian flowers filled my nostrils. The growls and heavy wing beats of squabbling bats held me spellbound. Huge bats in silhouette flew from tree to tree like giant eagles in the night. As entranced as a 10-year-old wrapped in a TV thriller, I recorded every move I saw, every growl I heard, into my tape recorder.

A bat— actually a flying fox— I called “Alpha” swiveled on a branch as it faced an incoming late arrival that tried to land. Alpha opened its mouth, growled, and spread its full five-foot wingspan, frightening the intruder away. Like all other bats, distributed one to a tree, Alpha prepared to enjoy the sweet nectar of the durian flower.

It licked dense clusters of flowers for several minutes at a time and then crawled and climbed from branch to branch to other clusters. After several hours of feeding, Alpha rested, grooming the white pollen from its fur.

The bats and I had arrived about 7 p.m. At 20 minutes before midnight an explosion rocked the nearby kampong. I rose at least a foot off the ground. A Chinese hunter stood 15 feet behind me. His 12-gauge shotgun had shattered the din of droning insects and flapping bat wings.
Alpha dropped like a stone. I froze. But then, like a madman, I faced the jubilant hunter, screaming expletives that he fortunately could not understand. David, my Hindu guide, placed his hand on my shoulder. “He has a gun.” I became quiet. The proud hunter and his son picked up the bat and spread its wings. He planned to use the dead animal for a medicinal tonic to treat asthma.

Then I realized I could turn this unfortunate event into an opportunity. Because Malays consider it a destroyer of durian flowers and fruits, which is a favorite food, this bat is one of Malaysia’s few unprotected animals. If I examined the bat’s stomach contents I could confirm whether the animal eats flower parts or simply licks nectar as I had observed.

I calmed down and through David asked the hunter if I could examine the bat’s stomach.
“No,” the hunter replied and suggested that I find my own bats in the market.

“I need that particular stomach,” I explained. He really thought I was crazy now and began to pull away. “I’ll give you two dollars. Just let me examine it. I won’t touch the meat.” He shook his head.

I ran for my field kit and returned to the death scene. I carefully made an incision so as not to puncture the stomach. To my delight, the stomach was so distended with golden fluid that it looked like a clear plastic bag filled with colored water. No more than two or three tiny flower parts could be seen. Clearly these bats were feeding on the nectar and were not responsible for destroying the delicate flowers that were now falling like confetti from the trees.

I later published a paper in the Malay Nature Journal* on flying foxes and their feeding habits on durian flowers. Unfortunately, the flying foxes remain unprotected and are still shot for both food and medicine.

After I finished with the stomach I looked up. The bats had disappeared and most of the open flowers had fallen to the ground. Only the flashing fireflies remained.

[bio]
Edwin Gould is Curator of Mammals at The National Zoo in Washington, D.C. He is also a member of BCI.

[note]
—This article is reprinted, with permission, from Zoogoer. 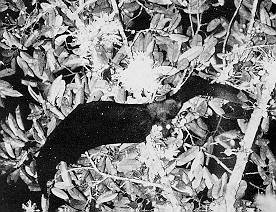