One man decides to give back to nature some of what we have taken away . . .

The first criterion for real estate is location. For bats, Central Texas, with its carved-out canyons, seems to be an ideal location. This is especially true for Mexican free-tailed bats (Tadarida brasiliensis), which migrate here each spring to give birth and raise their young. But with loss of caves to urban development, there is much competition for remaining housing. Fortunately, there‘s someone who wants to help–BCI trustee
J. David Bamberger, who this year has created lodging for future generations of Texas bats by building his own cave, literally from the ground up, on his 5,500-acre ranch in Johnson City.

The Bamberger ranch, known as "Selah" (a Biblical word meaning "to pause and reflect"), is dedicated to conservation, education, and research. The approach is multifaceted, including rangeland restoration with native grasses and trees, as well as protection of nesting habitat for two federally listed endangered birds. For Bamberger, "enhancing" bat habitat was a natural extension of Selah‘s conservation and stewardship mission.

He was introduced to bats more than a decade ago by Andy Sansom, an advisory BCI trustee and the Executive Director of the Texas Parks and Wildlife Department. Sansom took him to Bracken Cave–the summer mecca of more than 20 million Mexican free-tailed bats–which BCI now owns and protects. Seldom at a loss for words, Bamberger was rendered speechless by the endless stream of emerging bats. Several years later, he became a BCI trustee and chairman of the Bracken Cave Committee.

Over the years, Bamberger has organized volunteers to make Bracken Cave more accessible and attractive for visitors, and in 1995 he began hosting Members-Only Nights (see page 19). But there was another idea in the back of his mind. About five years ago, he asked BCI founder Merlin Tuttle what he thought about constructing a man-made cave as a bat roost. Tuttle thought it just might be possible.

Although Bamberger made his fortune as a founder of Church‘s Fried Chicken, he had a dream since his humbler beginnings of doing something important for the environment. He considers himself a land steward and his ranch an investment in Mother Nature; the bat cave, though a gamble, would be one way of giving back some of the habitat that humans have destroyed.

Money is a handy tool to make things happen, but Bamberger also does his homework–finding people who have the skills to transform his dreams into reality. For building his vision of "the world‘s largest man- made habitat for the free-will use of wild mammals," that person turned out to be Jim Smith from Santa Fe, who had trained in industrial design at the Rhode Island School of Design.

Knowing little about bats, Smith began with a crash course on their habitat needs. A master of detail, he visited several area bat caves and then sought out the experts–not only at BCI, but also at universities and agencies across the country. He had many burning questions: Do bats have a preference for the height of interior spaces? How much flying room do they need? What about the variety of crevices and holes in the walls? At what point should the walls begin to curve in? How much daylight is tolerable? Should the shape of the entryway somehow conform to emergence patterns?

"Having BCI nearby in Austin was great," Smith comments, "I was able to call upon the staff for their scientific expertise. They gave ongoing feedback as I fine-tuned my designs."

The first step was to pick a good site at Selah. Bamberger wanted an easily accessible spot with the right space for a future viewing platform. Merlin Tuttle advised that it should have a clear flight path, nearby water, good drainage, and the right orientation to capture warm air.

A canyon was selected, and construction quickly followed. Leroy Petri, the ranch engineer, cleared the vegetation, sculpted the canyon to divert natural drainage, and installed drainage culverts. He then poured footings and a foundation for the 3,000-square-foot floor.

Smith‘s design for the cave began with the shape of a nautilus shell. Two domes would provide open space in the interior, as well as spanning strength. Tuttle confirmed the size of the large dome and its slopes (20 feet high, 40 feet in diameter), stressing the need for a liberal opening for emergences. In Smith‘s opinion, there‘s no reason something functional or structural can‘t also be aesthetic. True to this goal, after Smith‘s crew had bent and tied 20 tons of re-bar, his cave structure became a magnificent sculpture–truly a work of art.

Meanwhile, he had been consulting on design ideas with Brian Keeley, who, as BCI‘s Bats and Bridges Project Coordinator, specializes in artificial habitat. Keeley emphasized that the ceiling and walls would need texture; he then began thinking of ways to increase the available roosting space. In the end, the pair decided to extend textured panels from the ceiling and add an array of eye hooks for "curtains" that bats could roost on if needed.

In keeping with the ranch‘s education and research goals, Keeley, Smith, and Selah‘s education director, Margaret Campbell, realized that as long as they were building such an amazing structure, it would be a waste not to incorporate an area for observation. Bamberger agreed. This idea of an adjoining observation room gained enthusiastic support at a June open house for members of the scientific community. Visitors included university researchers, such as noted free-tail expert and BCI scientific advisor Gary McCracken, as well as wildlife biologists from the U.S. Fish and Wildlife Service, Texas Parks & Wildlife, and the San Antonio Zoo.

Balancing input from the scientists, Smith worked out more details of the room, such as the design of custom-made windows, which will allow researchers to monitor colony activities. The finished observation room now looks like Command Central: There are port holes for positioning lights and cameras inside the domes; monitors for temperature probes; mounts for future installation of infrared lights; and even a special drop-door for cleaning the cave side of the observation windows. Of course, everything is solar-powered.

The final stage of the cave construction was the application of 300 cubic yards of gunite–a type of concrete used for swimming pools (jokingly referred to on this job as "guanite"). It was perhaps the first time gunite was ever sprayed upward rather than downward, and with a consistency like mashed potatoes, the messy material caused a fair amount of grief. With a little ingenuity and modification, however, it adhered to form an outer shell, 12 inches thick at the base, tapering to six at the top.

Except for minor details, the cave was completed in October–seven months after Smith first arrived in Texas. The exterior will soon be waterproofed and covered with a layer of soil. Native vegetation will be planted on top, and the entrance will be hand painted to look more natural, so that, in the future, the cave will blend into the landscape like any other Texas Hill Country cave.

But what do you call it? Bamberger is combining chiroptera (for bat) and auditorium (an area for assembling) to coin his new word, chiroptorium, defined as "a man-made cave-like habitat for bats consisting of several large dome structures with connecting passages and a separate observation room."

Even before the chiroptorium was completed, it had attracted more media attention than anyone expected. So far, stories about the unique venture have been featured in national newspapers and in the New York Times Magazine, People, Texas Monthly, and Texas Parks and Wildlife Magazine, as well as on television and radio interviews, including the "Voice of America" radio program broadcast around the world. Few reporters could resist calling the idea "batty," but most have also given it due respect as a positive effort for the environment.

Now the only question remaining is: If you build it, will they come? Unfortunately, no one will know until next spring or beyond, when the bats return to Texas.

"Given the Central Texas location and the quality of the design," comments Keeley, "I won‘t be surprised if bats claim it as home next year."

Tuttle concurs, adding "Mexican free-tails have moved into every structure we have inadvertently made for them in this area over the past century."

Sometimes, however, it takes years for bats to discover and move into artificial habitat. Bamberger is willing to wait, but he calmly adds that he does have a back-up plan: "It‘ll certainly make one heck of a wine cellar." 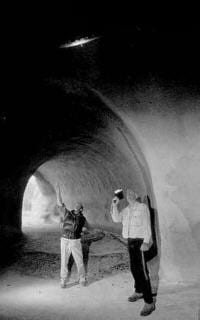 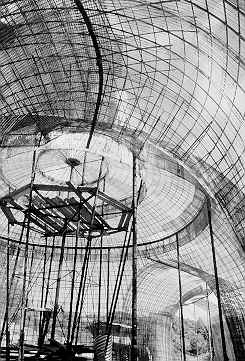 The beginning cave structure, made of re-bar with temporary supporting beams. 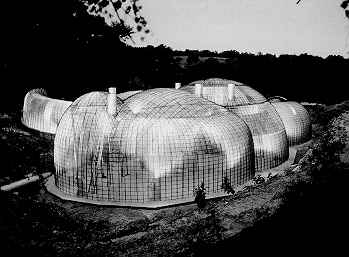 The view of the entire re-bar structure from behind. 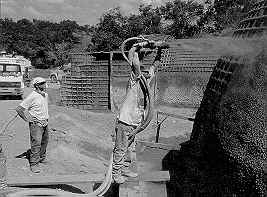 Workers spray gunite onto the cave shell to form a final hard coating. 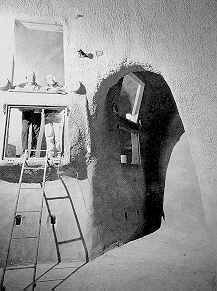 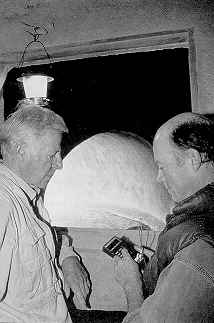 J. David Bamberger, left, and Jim Smith, right (both pictures), stand in the high-tech observation room, looking out onto the main chamber, where they hope to see bats roosting in the near future. 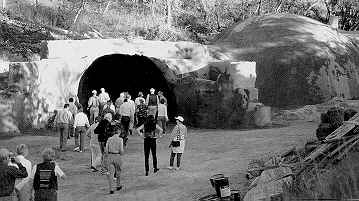 The October BCI board meeting ended with a visit to the chiroptorium. The cave will soon be covered with soil and vegetation to blend into its surroundings.