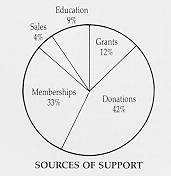 Many of our members may assume that Bat Conservation International’s membership dues sustain the organization’s programs and operations. In reality, dues account for only 33% of BCI’s overall funding, although that proportion is growing.

Grants, which accounted for 12% of BCI’s revenues in 1987, are obtained from foundations, corporations and other organizations. BCI’s sales, led by a surge of bat house buyers during the previous year, contributed 4% of total revenues.

An annual appeal for general fund support was begun in 1985 to supplement revenues from sales, grants, memberships and other programs. Thanks to the generous support from our members, to date we have reached 82% of our 1987 annual appeal goal of $58,000 for funds to support BCI programs in 1988. Attaining the remainder of the goal by June will be critical for our continued progress this year.