Incorporating timbers from an old bridge into a new one brings Australian large-footed bats back home to roost . . .

Early in May 1996, I was informed that a colony of bats roosting within an old wooden bridge in eastern New South Wales was about to lose its home. Demolition was due to commence within days to make room for a new concrete structure. Guessing that these particular bats were large-footed bats (Myotis adversus), a threatened species, I quickly alerted environmental staff at the local city council in Lake Macquarie.

Sure enough, an initial inspection revealed that this represented the first known roost of large-footed bats in the Lake Macquarie area. From my point of view, the discovery was very exciting, but for the city council and their bridge construction company, it presented unforeseen obstacles. I developed a plan allowing the bridge to be replaced with minimal disturbance to the bat colony, and it was approved by both the city council and the National Parks and Wildlife Service. My subsequent role was to ensure the bats were safely excluded from the bridge and to attempt to re-establish their roosts within the new structure.

As demolition began, we progressively excluded the entire colony of bats from the cracks in the timbers where they roosted. Plastic flaps were placed over roost entrances so that the bats exiting at dusk were unable to re-enter after feeding. Using scaffolding beneath the bridge, I crawled around on the narrow timber planks, precariously suspended over a murky creek, placing traps at the roost entrances. The bats I caught were banded, and some individuals were fitted with radio transmitters. By tracking the transmitter signals, we discovered an alternative roosting site among the concrete beams of a canal supplying water to a power station about 2 1/2 miles (4 km) away.

When the new bridge was partially completed, the construction crew moved roost timbers from the old wooden bridge into equivalent positions in the new concrete one. This method of incorporating pieces of the original roost into a new structure may actually be the first of its kind attempted.

We had determined that, prior to the bridge replacement, a population of at least 170 large-footed bats had roosted there. Also, the presence of many juveniles and the discovery that females outnumbered males approximately four to one suggested the bridge had been a maternity roost. Following completion of the new bridge, the Lake Macquarie City Council funded a monitoring program, and we have verified that large-footed bats have re-established roosts within the old timbers and are breeding successfully. Apparently the bats recognized their home!

Glenn and Margaret Hoye have researched bats throughout Australia for the past 20 years. They survey, research, and advise on bat-related issues through their company, Fly By Night Bat Surveys.

The success of this project suggests that the strategy of fitting old roost elements into new structures could be applied in many similar situations. Anyone attempting this, however, should be aware of climatic differences and other changes that could make the habitat unacceptable to the bats. Prior to removal, one should note the position, aspect, height, temperature, and sun exposure of roost elements then take care to re-install them into equivalent positions and conditions in the replacement structure. 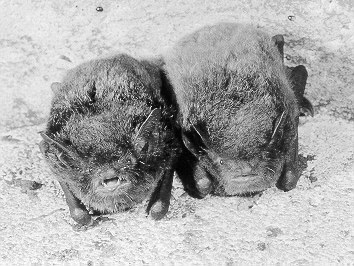 In addition to bridges, the large-footed bat’s most common roosts include caves, mines, tunnels, tree hollows, buildings, and dense foliage in rain forest areas. This species is seldom found far from bodies of water, over which it hunts for insects and small fish. 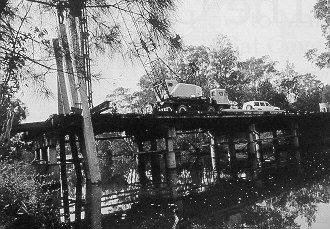 Top: Piers for the new bridge were installed while the original timber bridge was systematically removed. Scaffolding used to reach the bat roosts is visible under the bridge. 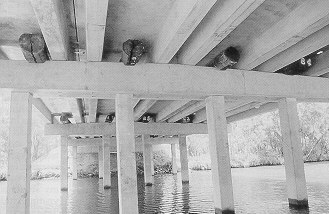 Above and left: Timbers from the old bridge were carefully placed in equivalent positions in the new structure, and the city council marked the significance of the roost with a plaque. (“Fishing bat” is a common local name for the species.)