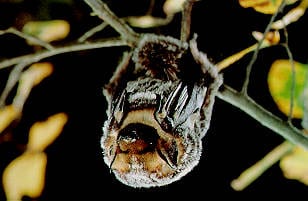 Hoary bats (Lasiurus cinereus) are one of America’s largest and most handsome bats. With their long, dense, white–tipped fur, they have a frosted, or hoary, appearance. From late summer into early fall, they begin their long journey south, migrating to subtropical and possibly even tropical areas to spend the winter. Traveling in waves, they are often found in the company of birds, who also migrate in groups. For the rest of the year, however, hoary bats remain solitary.

These bats of the forest are among the most widespread of all bats, found throughout Canada and the United States and south into Central and South America. The hoary bat is Hawaii’s only native land mammal. It also occurs from Iceland to the Orkney Islands and has been reported in Bermuda and the Dominican Republic.