"All things in nature have a purpose. Our challenge is to understand the value of these natural gifts and use them responsibly."

The man who spoke these words wasn’t talking about plants, animals, or any of nature’s more obvious jewels; he was singing the praises of bat dung. As the owner of Garden-Ville, one of Central Texas’ finest organic gardening emporiums, guano purveyor Malcolm Beck not only sells the pungent powder, he also harvests it every year from nearby Bracken Cave. The cave, which is owned and protected by BCI, is home to the world’s largest known bat colony.

Beck first learned about guano and the abundant supply of it at Bracken Cave from a co-worker at his railroad job in 1959. He tried using the guano as fertilizer for his vegetable garden and was amazed at the results. He didn’t know that generations of area residents had been extracting, selling, and working with this natural plant fertilizer and soil builder since at least the late 1800s.

In fact, bat guano has been used in agriculture in many regions for hundreds of years. In the 1600s in Peru, the Incas valued guano so highly that the punishment for harming the animals that produced it was death. During the late 19th century, it
had become important enough to American farmers that the government offered free land to those who discovered guano deposits, provided the harvest was made available to U.S. citizens.

Guano was somewhat forgotten once chemical fertilizers became the plant food of choice, but it has always been prized by organic growers. Now that the risks of synthetic gardening products are becoming widely known, more and more farmers are realizing that this dark, rich manure is indeed one of nature’s treasures. For Malcolm Beck, it is an alternative to a shelf full of chemical products, ably serving as plant fertilizer, soil builder, soil cleanser, fungicide, nematocide, and compost activator. His enthusiasm is the result of years of experimentation with organic fertilizers and soil additives, and his experiments are supported by the experiences of countless customers who also swear by guano.

According to Beck, bat guano can be safely used as a fertilizer, both indoors and outdoors, and will benefit vegetables, herbs, flowers, all ornamentals, and fruit and nut trees. Its primary ingredients are roughly 10% nitrogen, 3% phosphorous, and 1% potassium. The high nitrogen content is responsible for plants’ healthy green color and their rapid growth after application. Phosphorous promotes root growth and flowering, and potassium encourages strong stems. Besides these three major nutrients, guano contains all of the minor and trace elements necessary for a plant’s overall health. Unlike artificial gardening products, guano contains no fillers. And, while most chemical fertilizers leach out of the soil soon after being applied, Beck notes that guano remains much longer, enhancing the soil and slowly continuing to feed the plant.

He has also found that guano "works wonders" as a soil builder and says it can be used year-round to improve soil texture and richness, helping to bind loose soil and lighten heavy soil. Homeowners have reported to Beck that the benefits of a single treatment on the lawn can still be seen three or four years later.

Because guano is rich in bioremediation microbes, which clean up toxic substances, Beck touts it as a purifying addition for gardens in transition from chemical to organic practices. He also reports that these microbes will combat fungus when sprayed directly on a plant’s leaves. Finally, Beck reports that bat
guano contains powerful decomposing microbes, which help control soil-borne diseases and harmful nematodes and which serve as ideal compost activators, significantly speeding the decomposition process.

The guano cycle begins with plant matter that is eaten by insects. The insects in turn are eaten and digested by bats. After the bats deposit their waste on a cave floor, it is processed once again by millions of beetles and billions of decomposing microbes. What’s left is perfectly preserved and protected inside the cave–a natural fertilizer warehouse.

Guano should not be harvested when bats are present. At Bracken Cave, harvesting is never scheduled until after the bats–some 20 million Mexican free tails (Tadarida brasiliensis)–have migrated south for the winter (typically in early November) and the guano has had a few weeks to dry. Beginning the process during the bats’ stay would disturb them needlessly and could jeopardize their survival.

In the late 1800s, a vertical shaft was constructed at Bracken Cave to extract the guano. Unskilled laborers worked inside, shoveling the harvest into buckets, which were then hoisted up through the shaft. Although the process has been modernized, the guano is still extracted today through the same 100-year-old shaft. In areas of the cave not easily accessible to humans, a large hose attached to an industrial vacuum truck is inserted through the shaft, and the cave floor is vacuumed. This method is automated and fast, requiring little manual labor. But because it costs $360 an hour to operate the truck, humans still provide most of the labor in the larger rooms of the cave. Workers shovel the guano into a hopper attached to a pipe that leads to an air compressor above. The compressor creates a vacuum and sucks the guano from the hopper into large bags at the top of the shaft. One day’s work will typically result in 200 bags, or roughly 8,800 pounds, of guano. It takes about 21 days to complete the harvest.

Malcolm Beck probably couldn’t have imagined back in 1959 that the cave his friend casually mentioned would eventually become the source of a purposeful new career. Today he harvests, markets, and sells up to 50 tons a year of Bracken’s bounty. In doing so, he also promotes and financially supports bat conservation. In an era when more businesses are trying to balance environmental responsibility with profitability, Beck demonstrates that intelligent conservation practices often provide substantial rewards for people as well.

The Straight Guano: Seven Ways to Use It

Guano is available in 3-lb. or

you would like information about how to bring guano to your local nursery, call Steve Walker, BCI’s Associate Executive Director, at (512) 327-9721, ext. 25. 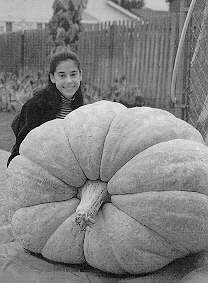 Two hundred and fifty pounds of guano helped fertilize the pumpkin patch at Illinois gardener Steve Diamond’s house. Diamond’s twelve-year-old daughter illustrates the enormous proportions of the pumpkins, which can gain more than 20 pounds a day at peak season." At that time, the vines grow about one inch per hour," says Diamond. "You can almost watch them grow." 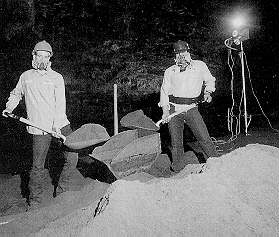 The harvesting of guano perpetuates an age-old connection between bats and people, but can be dangerous for both unless professionally managed. These two Garden-Ville employees are protected from the guano’s intense ammonia fumes and spore-ladden dust by gas masks, and are working in the cave at a time when no bats are present. 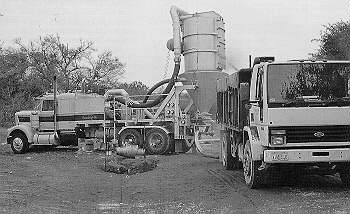 Vacuum trucks extract guano from a 100-year-old shaft at Bracken Cave. This modern method of harvesting is far more efficient than the block-and-tackle pulley system used in the past.