The Guam National Wildlife Refuge –the newest in the National Wildlife Refuge System–was barely two weeks old when it was blasted from the floor of the U.S. House of Representatives. The representative for Guam, Delegate Robert Underwood, condemned the U.S. Fish and Wildlife Service (FWS) for acquiring 370 acres of excess land from the U.S. Navy at Ritidian Point. The FWS considers the unit critical to the success of the refuge, where it will serve as a focal point for endangered species recovery and environmental education, as well as an administrative headquarters.

The new wildlife refuge may eventually encompass over 28,000 acres of forests, wetlands, caves, beaches, and other habitats for a variety of wildlife from endangered birds and mammals to sea turtles and native tree snails. Its primary purpose is to protect and restore these habitats and provide for recovery actions to benefit several endangered and threatened species of animals and plants.

Because the endangered species problem on Guam is so urgent and so complex, a cooperative approach was considered necessary to reverse the tide of extinctions. The General Services Administration transferred the Ritidian Point property to the U.S. Fish and Wildlife Service on October 1, 1993, thereby creating the refuge. The Service is now negotiating cooperative agreements with the U.S. Navy, U.S. Air Force, and the Government of Guam that will establish overlay units of the refuge on lands administered by these entities and provide for refuge management.

Terming the property transfer a “land grab,” Delegate Underwood seeks to have the newly established refuge land instead transferred to the people of Guam. In his address before the House, he cited injustices to the indigenous Chamorro people when the military originally obtained the land after World War II. The proposal by the Government of Guam also includes returning the lands to the previous landowners at Ritidian Point.

During the public comments period on the proposed refuge, however, the majority of respondents supported the refuge, many of them commenting on how it could help preserve the natural and cultural heritage of Guam for all people and future generations. Another purpose of the refuge is to utilize it to develop public education programs on Guam’s natural resources. The FWS has also made a commitment to the Government of Guam to create a compatible recreational use area within the Ritidian Point Unit of the refuge. With cooperation from the Government of Guam and the Guam Division of Aquatic and Wildlife Resources, the FWS is in a good position to achieve the goals of the refuge.

Today, all of Guam’s native mammals and birds are at high risk of extinction in the wild. Following World War II, native wildlife declined catastrophically; almost all of Guam’s forest birds are now listed as endangered. Some animals are extinct, among them probably the little Mariana fruit bat (Pteropus tokudae), which has not been seen since 1968. These precipitous declines have been ascribed to loss and degradation of habitat due to human activity, but one of the prime reasons was the accidental introduction of the brown tree snake (Boiga irregularis). The refuge system would coordinate efforts to control the snake and protect wildlife.

Among the endangered animals are Mariana fruit bats (P. mariannus). The only remaining colony on Guam, approximately 500 bats, is located within the proposed boundaries of the refuge. The colony’s small size and low reproductive rate make it highly vulnerable. The dramatic decline of these bats is primarily due to unrestricted hunting (fruit bats are considered a delicacy on Guam, as well as throughout much of Micronesia*). Although it has not been legal to kill these bats on Guam since 1977, poaching has also been a serious threat and must be eliminated in the new refuge. The bats are important pollinators and seed dispersers for Guam’s remaining forests. Without the bats, the forests themselves are in jeopardy.

The relatively untouched beauty of Ritidian Point contrasts greatly with the heavily developed areas of Guam. This is one of the few places on the island where you can still hear birds calling in the treetops and see the magnificent Mariana fruit bats slowly circling near the limestone cliffs. Under protection of the refuge, these animals will have the chance to recover and be there for future generations to enjoy and appreciate.

You can help by voicing your support now

We need your help to ensure that politics don’t overcome the importance of protecting an endangered system of unique plants and animals. With most of the island developed for use by people, we need to ensure that wildlife has at least a small corner in which to survive. 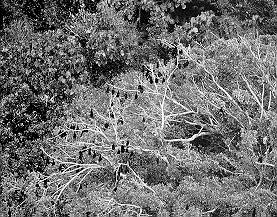 Above: The Ritidian Point unit of the refuge is a critical feeding and fly-through area for the last Mariana fruit bats on the island. Without the continued protection offered by this area, their future is uncertain.

Ritidian Point is one of the last places on Guam where fruit bats can be seen soaring over the ocean along the island’s limestone cliffs.