The U.S. Fish and Wildlife Service announced late in March that ongoing talks with the Air Force and Navy have resulted in the addition of 22,502 acres to the Guam National Wildlife Refuge. BCI members, responding to an Action Alert in the Winter 1993 issue of BATS, sent over 200 letters in support of the refuge to the Department of the Interior and the Fish and Wildlife Service. U.S. House of Representative delegate from Guam, Robert Underwood, received over 100.

Such a large response drew unexpected attention to the issue on the island of Guam as well. An editorial in the Pacific Daily News, a paper published in Guam with a wide distribution throughout the Pacific, applauded the national interest in the refuge, citing BCI’s Action Alert. They conceded that Guam must do more to protect its natural resources and environment but also pointed out that both sides of the argument had valid points. Underwood has been fighting establishment of the refuge, seeking instead to have the land transferred back to “the people of Guam.”

The U.S. Department of Defense, however, agreed that the lands should be designated as a refuge, recognizing that the designated areas provide habitats essential to the survival and recovery of endangered and threatened species on Guam, including the Mariana fruit bat (Pteropus mariannus). Called “overlay units,” the new areas still belong to the military.

Ray Rauch, Project Leader for the Hawaiian and Pacific Islands National Wildlife Refuge Complex said, “These new refuge units indicate the commitment of not only the Fish and Wildlife Service, but also the Air Force and Navy, to work with the Government of Guam and local residents to protect and conserve the island’s natural heritage.”

The refuge now includes a total of 22,873 acres, with 371 acres at Ritidian Point, which was transferred to the Fish and Wildlife Service last October [BATS, Winter 1993]. With completion of the cooperative agreements, the Fish and Wildlife Service, Navy, and Air Force will now begin developing an annual work plan for the refuge, as well as a long-term, comprehensive program to conserve and recover endangered and threatened species.

Underwood has discussed legislation to transfer fee title of the critical Ritidian Point lands from the U.S. Fish and Wildlife Service to the Government of Guam but has not yet introduced it. Even then, it still would have to be approved by Congress. The Government of Guam has not yet signed the Memorandum of Understanding or the cooperative agreement to create additional overlay units of the refuge on non-Fish and Wildlife Service or Federal lands.

The refuge encompasses some of the last undeveloped land left on Guam. Guam’s only remaining colony of Mariana fruit bats, numbering about 500, now lives within the boundaries of the refuge, as do several other endangered species, including the Mariana crow. Commercial hunting and habitat loss through development are major factors contributing to the decline of fruit bats and other species on Guam. In addition, the accidentally introduced brown tree snake (Boiga irregularis) has caused precipitous species declines, particularly in native bird populations.

Fish and Wildlife Service Director Mollie Beattie said, “We must act immediately if the Mariana crow and Mariana fruit bat–and other native species of Guam–are to be saved.” She went on to say that, “Cooperative efforts between the Service, the National Biological Survey, the Navy, the Air Force, and the Government of Guam to protect habitat, prevent poaching, conduct research, guide recovery actions, and develop ways to control the brown tree snake already are occurring on the Guam National Wildlife Refuge. The refuge is viewed as providing real hope for saving this important part of Guam’s natural heritage.” 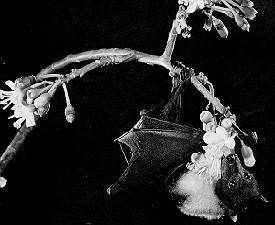 Mariana fruit bats are among the rare and endangered wildlife whose habitat is now protected by the Guam National Wildlife Refuge. This one is pollinating a kapok blossom.