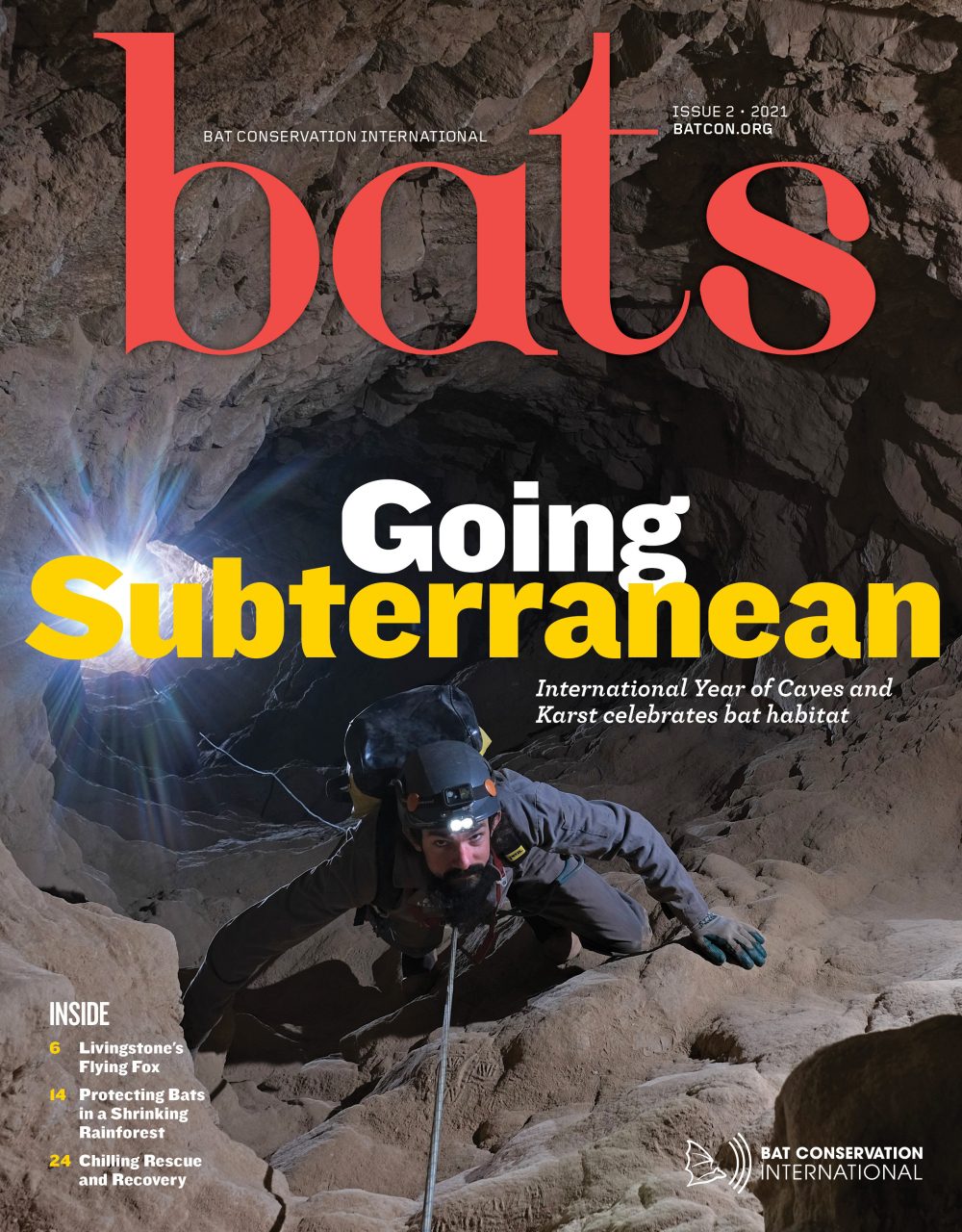 When a bulldozer rolled onto the land over Cueva del Diablo, a cave located near Mexico City, earlier this year, local residents knew they needed to mobilize—and quickly. Construction was about to take place over one of the cave’s fragile passages. Concerned community members called Dr. Ana Ibarra, a local bat researcher who is working with Bat Conservation International, telling her about the heavy machinery, which appeared to be part of a large construction project. Dr. Ibarra phoned the authorities, who halted the project.

Cueva del Diablo (known as “the Devil’s Cave” in English) is the last known breeding site for Mexican Long-nosed Bats, and preserving the cave is vital for survival of the species. Human disturbance and development are significant threats to the cave, and one house has already collapsed into it. Thank­fully, no one was injured.

Providing a crucial habitat for species like bats is one of the many ecological benefits caves provide, and in 2021, they are being cel­ebrated worldwide during the International Year of Caves and Karst. The celebratory year also recognizes karst, the porous lime­stone landscape where caves often form that comprises over one-tenth of the Earth’s land surface. Not only do caves provide a home for bats, but they also support complex eco­systems and an array of wildlife, including shrimp, eels, crayfish, salamanders, and invertebrates— many of which feed on bat guano.

Jason Corbett, Bat Conservation International’s Director of Habitat Protection and Restoration, refers to caves as “an anchor on the landscape,” supporting species for tens of thousands of years. He says people have found 30,000-year-old mummified bats in caves. “Caves tend to be on the landscape for a very long time,” he says. “Bats come back and use them from generation to gen­eration to generation.”

Bats rely on caves for hibernating, giving birth, raising young, and roosting. “Bats need a stable climate to do all of those things,” Corbett says, noting caves provide a far more consistent environment than human-made structures.

Of course, not all bats live in caves. Some prefer tree cavities, rock crevices, or even under the eaves of houses. “We talk about some bats as being ‘subterranean obligates,’ which means they depend on caves, mines, or other subterra­nean habitat for at least part of their life cycle,” says Shawn Thomas, Bat Conservation International’s Subter­ranean Team Manager. “Not all bats are cave dwellers.”

When Thomas and his team conduct research in caves, they see a variety of bats. Most often, in the Western U.S., they see Townsend’s Big-eared Bats, and occasionally Big Brown Bats, Cave Myotis, Pallid Bats, and other species. Their cave work involves using LiDAR (Light Detection and Ranging) technology to scan the caves with lasers, charting their dimensions, while also surveying for wildlife and conducting other assessments, such as documenting microclimate and microhabitat conditions that may support critical lifecycle phases for subterranean bats.

For the bats that do rely on caves, when their habitat is threatened, it puts them at risk. Caves face many threats, including land use change, development, and vandalism—like people fracturing formations and leaving graffiti and trash—as well as less obvious threats like pollutants running into caves’ water systems. In karst landscapes, con­taminants—such as an accidental chemical spill, sediment from farming, or even sewage releases upstream—can easily drain through the porous limestone, entering the water table and degrad­ing the freshwater people and animals rely on, while also damaging the caves’ delicate ecosys­tems and microclimates.

During extreme weather, caves can provide a subterranean refuge for bats, even buffering the impacts of climate change. In February 2021, when a deep freeze hit Texas, large numbers of bats per­ished in the frigid conditions. Most of these bats were used to roosting in human-made structures, such as the expansion joints within bridges.

“There’s no protection from these temperature changes in the bridges, so that’s where they ran into trouble—they were below freezing for almost a week,” says Fran Hutchins, Bat Conservation Inter­national’s Director of Bracken Cave Preserve.

While bats relying on human-made structures did not fare well, those with natural habitats were more protected from the cold weather. Bat Conservation International’s Bracken Cave, located near San Antonio, provided a safe haven for many bats. Hutchins says the cave’s temperature didn’t drop below 37 degrees Fahrenheit during the cold snap, with bats’ body heat and the 100-foot-deep layer of decom­posing guano on the cave floor generating warmth.

“Caves in general are naturally insulated,” Hutchins says. “Being below ground, you have all the earth that insulates them, so the temperatures don’t fluctuate as much as on the surface.”

While Hutchins believes Bracken Cave may help moderate temperature-related impacts of climate change for the bats that use it, he sees other issues on the hori­zon. The Mexican Free-tailed Bats at Bracken Cave feed on crop pests from corn and cotton within 60 miles of the cave. These important food sources could be impacted by a changing climate. Droughts could also impact caves’ water systems, causing them to dry out and imperil the invertebrates that live there.

“What you’re going to have a problem with is not so much the roost, but the food supply outside the roost being affected by climate change,” Hutchins says. “If you get these droughts or hot, dry summers in areas where we don’t have the plant life, or if that changes, then the bats aren’t going to have the insects they need to forage for, or some species may not have the agave flowering to feed on.”

However, a large number of bats congregating in one place—like a single cave—can be a setup for disaster, especially in light of climate change. If the cave were to become uninhabit­able for some reason, the bats that rely on it could be in deep trouble.

When caves become too warm or too cold for a species, they may abandon their roost. Some of Jamaica’s hot caves are already cooling. When a drought dries up a cave, or severe weather—like flooding, cyclones, or hurricanes—inundates one with water, it may no longer be habitable. A landslide due to climate extremes or a natural collapse could also imperil species. In locations where a cave houses the majority of a species, this can have drastic impacts. “With so many individuals reliant on one site, it can mean the extinction of a species,” Dr. Flanders says.

Even bat boxes specifically designed to house bats aren’t a per­fect substitute for natural habitat. Bats can overheat in these boxes, and scientists are carefully analyz­ing the designs they use, installing temperature probes to monitor conditions inside, comparing them to more natural habitats like tree cavities.

“If you are installing artificial habitat, whether bridges or even artificial caves, you have to be extremely careful because you could create habitats that become ecological death traps,” Dr. Flanders says.

Natural habitats like caves contain microclimates, pro­viding roosts with colder and warmer sections, and various humidity levels, allowing bats and other animals to find just the right spot. “Bats have a whole host of options and areas they can utilize within a cave and find a particular roost that suits them,” Corbett says.

Preserving these nat­ural habitats is key, and their protection relies on committed local communities—like the residents near Cueva del Diablo—to help conserve them.

“We cannot do any­thing we do without the support of the community and making sure what benefits the cave will benefit them as well,” Dr. Flanders says.