The twentieth century was not kind to the bats of Moldova, a former Soviet republic. Industrial pollution degraded the landscape, and massive use of bats in laboratory research destroyed whole colonies that have not recovered.

In 1995, a small, dedicated team of local biologists called Grupul Fauna set out to help Moldovan bats. In the last year, they have worked with the government to protect two abandoned mine roosts and create the first bat reserve in a post-Soviet country. Currently they are targeting another mine, which once housed the country’s largest known bat colony. Ten species have recently begun to return, and Grupul Fauna is striving to gain official protection and begin teaching local Moldovans to value their nocturnal neighbors.

These local citizens are a good example of the many motivated conservationists around the globe who approach BCI for aid each year. Working alone or in small teams, they are often the only advocates for bat protection in whole countries and regions. They teach the value of bats in local schools and work at night to conduct surveys in areas where there is little existing data. They labor to protect key bat roosts, one by one, usually on the slimmest of shoestring budgets.

In supporting these conservationists, we have seen the incredible impact that a little encouragement, a few supplies, a package of educational materials, or even a small grant can have on their lives and the outcome of their work. It is sometimes hard to believe that our seemingly minor assistance can produce such widespread and positive results for bats. (See “Report from Slovakia,” BATS, Spring 1999.)

BCI’s new Global Grassroots Conservation Fund will allow us to quickly respond to such requests for assistance, under the direction of our five-continent Scientific Advisory Board. Recipients will provide background information and references, discuss project design with BCI staff, and supply reports and photo-documentation of their achievements.

This program is an acknowledgment that BCI will never have the resources to address all our international objectives on our own, nor do we want to. Experience has demonstrated that only local partners have the credibility and understanding to make lasting changes in their countries. With BCI advice, materials, and small, low-risk grants, these crusaders are building a global infrastructure for long-term bat conservation that we could never achieve alone.

For more information on how you can support some of

the world’s finest volunteers, please contact Arnie Phifer, Director of Development, at (512) 327-9721, ext. 26, or aphifer@batcon.org. Or, send your gift directly to: 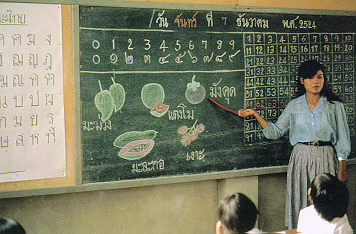 A teacher in Thailand educates students about local fruits that bats help propagate through pollination or seed dispersal. Time and time again, local volunteers have amazed us by stretching minimal donations from BCI into significant advancements for bats in their region. With a new fund for grassroots work, we will be able to better respond to more of these dedicated conservationists around the world.