With enforcement of new CITES regulations restricting the Pacific island flying fox trade, bats are off the menu in Guam.

It's uncommon these days for conservationists to reap immediate and dramatic results from their hard fought efforts. But this is exactly what is happening in the Pacific. New regulations, aimed at protecting flying foxes from international commercial trade, are being enforced. Flying foxes, mostly of the genus Pteropus, have long been harvested on many Pacific islands for export to the Mariana Islands. On Guam alone, an estimated 230,000 bats, involving at least 10 species, were imported between 1975 and early 1990. But that number has been dramatically reduced since the first U.S. Fish and Wildlife Service (USFWS) inspector arrived on Guam in April of this year.

Flying foxes are a traditional delicacy with the resident Chamorro culture of the Marianas. Sadly, the trade evolved because overhunting had caused precipitous declines in local bat populations. The Marianas fruit bat (Pteropus mariannus) is now an endangered species, and the little Marianas fruit bat (P. tokudae) is extinct. In the early 1980s conservationists became alarmed at the trade's potential to endanger flying foxes on many islands throughout the Pacific. Biologists were already documenting population declines that seriously threatened some of the world's most unique rain forests, which rely heavily upon flying foxes for their survival.

The first successful efforts to regulate inter-island trafficking in flying foxes came in 1987 when nine species of Pteropus were placed on Appendix II of the Convention on International Trade in Endangered Species of Wild Fauna and Flora (CITES) [BATS, Spring 1988]. Inclusion on CITES Appendix II controls, but does not prohibit, international commercial trade. Each member nation of the CITES treaty is responsible for enforcing regulations on imports into their country or territories. Unfortunately, the USFWS did not enforce the restrictions, and the bat trade continued unabated.

Two years later a contingent of conservationists joined forces with representatives from BCI at the next CITES conference in Lausanne, Switzerland. Their efforts resulted in Appendix I status, the greatest protection, for the seven most vulnerable species of flying foxes [BATS, Winter 1989-90]. Appendix I prohibits trade in all but a few exceptional circumstances. The remaining species of Pteropus, plus bats in the similar genus of Acerodon, were added to Appendix II. Putting all flying foxes under CITES protection was an important achievement, but the trade would continue unless the new regulations could be enforced.

Intensive efforts by Bat Conservation International and the International Union for the Conservation of Nature (IUCN) persuaded the USFWS to station federal wildlife inspectors on Guam. Finally, in February 1990 at the BCI-sponsored Pacific Island Flying Fox Conference, the USFWS announced that it would send two inspectors to Guam from April 1 to September 30, 1990 [BATS, Spring 1990].

A comparison of recent trade data shows that during the first three months of 1990 (before enforcement), Guam imported an estimated 3,989 flying foxes. By May and June, imports declined sharply when only 292 flying foxes arrived! The Government of Guam has played an equally significant role in this change by no longer issuing import permits for species on Appendix I.

William Dusel, of the USFWS office in San Francisco, California, was the first wildlife inspector sent to Guam. Experienced and personable, Dusel worked closely with the local customs officials on Guam and spent considerable time informing importers of the new regulations. However, one major loophole remained. CITES restrictions apply only to international trade. But Palau, the major exporter of flying foxes to Guam, has been governed by the United States as part of the Pacific Islands Trust Territory since the end of World War II. Although Palau's flying foxes were given Appendix I protection, exporters could still ship them to Guam and Saipan. Trade between U.S. territories is domestic and not under CITES jurisdiction.

To stop imports from Palau, Dusel enforced a second law known as the Lacey Act. This law prohibits interstate transport of wildlife killed in violation of local laws within the United States. Palau has a law that bans owning firearms; thus, any flying foxes killed by shotguns are considered illegally taken and therefore subject to confiscation upon entry into Guam. Several shipments of bats with wings perforated by shotgun pellets were returned to Palau after inspectors refused their entry into Guam. This action has helped alert bat hunters and wholesalers in Palau that they can no longer use guns to kill bats for export. Dusel traveled twice to Palau to discuss the wildlife trade with government authorities there, and imports have since sharply declined.

Additional benefits have come from having an inspector on Guam. Other CITES and federal regulations involving endangered species were also enforced. Inspectors examined various wildlife leather goods imported to Guam for the duty-free market aimed at Japanese tourists, and they confiscated sea turtle products entering Guam from other Micronesian islands.

Initial success in implementing the CITES treaty shows the importance of having a wildlife inspector stationed permanently on Guam. With approval still pending for continued federal funding of the position, the inspectors have departed. Imports are still down since Guam continues not to issue permits for bat species on Appendix I, but it is vital that inspectors return on a permanent basis. Thus far, importers from Guam have made no serious attempts to seek alternative sources of flying foxes listed on Appendix II, but such a shift in the market could easily occur in the future. Smuggling may also begin. And as imported bats become more scarce, resident populations of Marianas fruit bats on other islands in the archipelago could come under increased pressure from illegal hunting. Poachers are already hunting on at least one island, Rota, and the bat population there has sharply declined from about 2,500 to 1,000 bats in only the last two years.

BCI continues to support flying fox conservation in Micronesia by working with the USFWS, other conservation organizations, and researchers such as Elizabeth Pierson and William Rainey. BCI also helped fund an important survey of cultural attitudes in Guam this past summer. Lili Sheeline, a graduate student from Yale University, spent three months on the island to learn more about the demand for flying foxes among the Chamorro community and to understand how they viewed the bats and conservation in general. The results of her survey will help BCI to better plan future educational efforts in the Pacific, particularly in Guam.

Everyone who has contributed to the conservation of flying foxes in the Pacific should be pleased. Their hard work is giving these bats and rain forest ecosystems a second chance.

[bio]
Gary J. Wiles has been a wildlife biologist with the Guam Division of Aquatic and Wildlife Resources for nearly 10 years. During this time, he has kept a watchful eye on the island's bat trade and has conducted studies in the biology of Marianas fruit bats and Guam's other endangered wildlife. He is a longtime member of BCI.

As this issue was going to press, BCI received word that hard work by Dixie Pierson and Bill Rainey, with support from other members and groups, and by BCI staff, resulted in the USFWS receiving funding for a wildlife inspector on Guam for at least the next year. 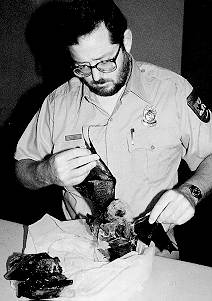 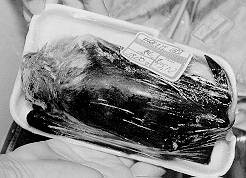 Until enforcement of the new CITES regulations, flying foxes were found in the freezer case at Guam supermarkets along with more common fare. Even at $18 a pound, the cultural delicacy is popular for special occasions.