In the article, "Can Rain Forests Survive Without Bats?" (BATS, 1983), Dr. Merlin Tuttle mentioned Pacific Island fruit bats that have been severely over-exploited for food. One species of particular concern is the Mariana's Fruit Bat (Pteropus mariannus) which is endemic to the Mariana Islands of the northwest Pacific. Fruit bat or "fanihi" is considered the most important of the local delicacies and is in great demand for all important occasions such as weddings and fiestas. The Chammoro people of the Mariana Islands have Spanish ancestors, hence the use of the word "fiesta".

During 1980-81, 1 visited the Mariana's, among other Pacific Islands, to gain information on the serious threat facing large fruit bats. I returned there in July, August and September 1983, leading a six man expedition from Oxford University. The purpose of this visit was to make the first surveys of fruit bats on the islands north of Saipan. Detailed results will be published in Oryx, journal of the Fauna & Flora Preservation Society. Bat Conservation International and FFPS endorsed and provided some finance for both expeditions.

Generous assistance was given by the newly created Division of Fish & Wildlife, Commonwealth of the Northern Mariana Islands (CNMI) and the Guam (US Territory) Division of Aquatic & Wildlife Resources. It was pleasing that the two politically separate administrations were able to cooperate on this venture and it is hoped that joint projects will continue in the future.

The Mariana's Fruit Bat also has been placed on the Guam endangered species list. It is the only species of fruit bat that remains in the whole archipelago. The population on Guam is constantly harassed by poachers and is close to extinction (Pers. Comm. Gary Wiles, Guam Aquatic & Wildlife Resources). Originally there was another species, Pteropus tokudae, but that one is now extinct.

A large population of fruit bats, about 1,500-2,000, was counted on Rota in June 1983 by the Division of Fish & Wildlife, CNMI and confirmed by us in August. The people of Rota are proud of their bats and are keen to see them survive, so that continued small scale utilization can occur. An application was made to the Fish & Wildlife Office in Saipan to take 30 bats for the October fiesta. Authorization was granted provided that no shooting at the roost sites occurred and that only four recognized hunters (appointed by the Mayor) carry out the work.

Unfortunately, the hunt got out of control,- shooting at the roost sites did take place and more than four hunters participated. it is not known how many bats were killed but certainly large scale disturbance occurred, and only a fraction of the bats counted at the roost sites in June and August remained in October. (In litt. Tom Lemke, Division of Fish & Wildlife, CNMI.) This illustrates the need for careful supervision in the future.

A total of only a few thousand fruit bats remain in fragmented groups on several islands. They are extinct on others. The Mariana's Fruit Bat is not as critically endangered as previously supposed, but it is still very vulnerable, considering its high commercial value as a delicacy. Hopefully enough people will realize the value of preserving these bats before remaining populations become extinct. 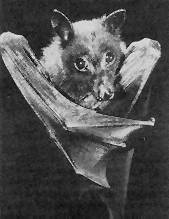 This is Ding, a flying fox (Pteropus giganteus) who is fast becoming a media superstar (see photo page one). Ding was born at the Milwaukee County Zoo last April. Unfortunately, his mother died of a heart attack while he was still too young to compete with the adults at the food dish. He was hand-fed, and cared for by zookeeper Nina Schaefer. Ding now weighs approximately 550 grams, is 12 inches long, has a wingspan of 3 feet, and is still growing. One of his favorite foods is banana, which he eagerly eats from the fingers of anyone offering it. Ding has recently started to assist the Education Department of the Milwaukee County Zoo in developing positive attitudes towards bats.
(photo by Merlin D. Tuttle)