The forests, caves, and reefs of Australia are our destination for next year’s all-new Founder’s Circle trip. But before we introduce our plans for the Australia trip, we’d like to share a few highlights from last February’s two tours in Kenya. Several participants were kind enough to let us print excerpts from their travel journals so that we could capture some of the wonder of this unique experience for everyone to enjoy.

Gilgil Mine is an active silica mine with pure white walls formed from diatomaceous fossils, mined for use in such mundane things as filters and insulation. It looks like an ancient catacomb–many low, arched openings were cut out for mining in the last century, leaving a maze of entrances and exits. At every turn we came upon a new cluster of bats. In the strange half-light, the little creatures looked like nothing more than a handful of mud thrown at the cave walls, a kind of surrealistic Rorschach image of brown-black matter. The bats ignored us, apparently accustomed to miners who leave them alone.

We arrived at the Mara River Camp to the sounds of the Hippo Symphony Orchestra bellowing and blaring an exuberant welcome. We scattered to the riverbank to see them, shooting film like paparazzi in a frenzy. So many snorting, blowing, rumbling hippos rising and sinking, we couldn’t even count them. It was like watching a hippo calliope. I’m mad about hippos.

Back on the ground after our incredible balloon ride, we had breakfast with a flock of ostriches and several elephants nearby. We took a game drive through the park on the way back to camp and came upon several lionesses gorged to the hilt. Next to them was the carcass of a topi. All that was left was the head with horns and the spine. The lionesses were just lying there, panting.

We headed for the sea cave early today while it was still low tide. Merlin’s memory from six years ago, when he was last here, was excellent; he found where the trail went right down to the ocean. As we approached the cave, a witch doctor emerged carrying a large machete. We entered the cave and immediately heard the bats chattering. The high, cathedral-like ceilings were completely covered with at least seven species of bats, which we carefully avoided disturbing. There were crystal-clear pools full of colorful reef fish below us, and beautiful skylighting above.

38,000 feet somewhere over the Atlantic The Africa trip was everything we hoped it would be. In addition to enjoying gourmet food at luxurious private camps and seeing Africa’s "Big Five" (lion, leopard, elephant, cape buffalo, and rhino) close-up, we explored seemingly endless lava tube caves and netted remote water holes for unique bats.

At our first private camp on Mt. Suswa, our dining area was shaded by a large fig tree overlooking a huge cave entrance. There were baboons in the background, superb flycatchers flitting overhead, and colorful agama lizards scurrying over the rock ledges. In the evening, we observed 100,000 giant mastiff bats emerge (some within inches of our faces), netted bent-winged bats, and enjoyed the incredible echolocation sounds of horseshoe bats. During the day, the more adventurous joined Paul Kabochi, our Kenyan leader, in tracking a large python to its den and a leopard to its kill in a nearby cave.

At Lewa Downs, we enjoyed both black and white rhinos in spectacular scenery and brilliant yellow-winged bats in our camp. At Lord Delamere Camp, we were treated to enormous flocks of flamingos as well as bent-winged and horseshoe bats. At the Masai Mara River Camp, we were serenaded by hippos practically at our front doors; observed elephants, buffalo, and crocodiles as we ballooned over the vast Serengetti; and enjoyed close encounters with lions, leopards, and caracul cats. On the Mombassa Coast, no one will forget the cute mother epauleted and Egyptian fruit bats who brought their babies with them as they visited baobab flowers. In addition to a plethora of big game and birds, we captured and released 28 species of bats!

We won’t even suggest beating the unbeatable sights of Africa on next year’s trip to Australia, but we will certainly do our best. Indeed, we will see many of the world’s most unusual animals. In addition to the famous koalas, platypuses, kangaroos, kookaburras, cockatoos, and emus, we will see spectacular flights of hundreds of thousands of giant flying foxes with four-foot wingspans and observe fishing bats fishing, blossom bats visiting flowers, and beautiful ghost bats emerging from their caves. We will play with several kinds of tame flying foxes that purr when petted and lick your face if given a chance.

Several of our destinations are World Heritage sites, where we will see many of our planet’s oldest living plants, unique aborigine rock art, giant crocodiles, frigate and other sea bird rookeries, the incredible life of the Great Barrier Reef, and much more. As in Africa, well-known local biologists will ensure our success in experiencing an extraordinary abundance of truly incredible creatures, both day and night.

Dates and enrollments details for our 1997 Australia tour, as well as our member trip to Peru, are on the back cover. The Australia trip is limited to 16 people, so please call now for more information. 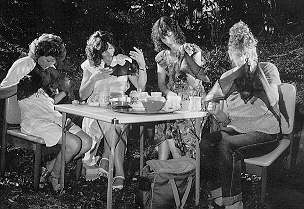 Our 1997 trip to Australia will include a visit with the "bat mums," a group of bat rehabilitators who care for orphaned and injured grey-headed flying foxes (Pteropus poliocephalus) from
the famous Ku-ring-gai colony of New South Wales. 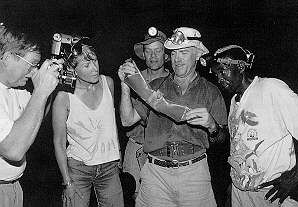 Every night presented a different bat adventure on our 1996 trip to Kenya. Here, Merlin Tuttle points out some of the extraordinary features of a giant leaf-nosed bat (Hipposideros commersoni) before releasing it.