Throughout the world, folklore is rich with tales speculating on how creatures as mysterious as bats came to be…

BATS IN FOLKLORE
part six, the conclusion to a series on bats in North American and European folklore

People often perceive bats as anomalous or ambiguous creatures, different from more “normal” animals. They have fur and teeth and nurse their young like other mammals, but they don’t walk on four legs. They have wings and fly like birds (actually, in many ways better than birds). They live in unusual places. Most often, they are seen only at night. What are they? In the terminology of folklorists, bats are “liminal”; they don’t fit into the normal order of things and are somehow apart or in-between. This apparent ambiguity in the nature of bats is seen in many folktales about how they came to be in the first place and how they acquired their various features.

The origin of bats is prominent in the folklore of several North American Indian tribes. In a Cherokee fable, an eagle, a hawk, and other birds fashioned the first bat and the first flying squirrel from two mouse-like creatures. These small creatures wished to participate in a ball game in which the “animals” challenged the birds. Because they were four-footed, the mouse-like creatures first asked if they could play with the animals, which included a bear, a deer, and a terrapin. But the larger animals made fun of how small the creatures were and drove them away. They then appealed to the eagle, the captain of the bird team. The birds took pity on the creatures and fashioned wings for one of them out of the head of a drum made from a groundhog skin, thus creating the first bat. Because not enough leather remained to fashion another bat, the birds then stretched the skin between the fore and hind limbs of the other creature, making the first flying squirrel. With the help of the bat and the flying squirrel, the birds won the ball game, with the agile bat scoring the winning goal.

In a Creek Indian variation of this tale, the bat first asks to play with the birds but is rejected by them and accepted by the animals’ team. The animals then give teeth to the bat to make it more animal-like. Using its new teeth to hold the ball, the bat helps the animals to win the game.

Apaches tell a different tale about bats. In this story, Jonayaiyin, a hero who battled the enemies of mankind, killed several eagles and gave their feathers to a bat who had helped him escape from the eagles’ nest. Repeatedly, the bat’s feathers were stolen by small birds, and repeatedly the bat returned to Jonayaiyin to ask for more. Frustrated, Jonayaiyin eventually told the bat “You cannot take care of your feathers, so you shall never have any.” “Very well,” said the bat, “I deserve to lose them, for I could never take care of those feathers.”

Traditional Navajo folklore places the origin of bats in the earliest world, when all was dark: twelve insects and the bat revolved in darkness. The bat serves as mentor of the night and is identified with Talking God, one of the foremost deities.

Folklore from Fiji, in the South Pacific, tells us that flying foxes originated when a rat stole the wings of a heron, while another Fijian tale relates that it was the rat that first had wings while flying foxes walked on four legs. The flying fox obtained his wings when he borrowed them from the rat and refused to return them. The rat now tries to retaliate by climbing tees and eating the flying foxes’ young, and this is why flying foxes carry their pups with them. Samoan folklore tells of a similar origin for bats.

A modern variation of the myth that bats arose from rodents comes from an Ohio woman of Polish ancestry who attested that “the bat was from a mouse that had eaten blessed Easter food.” (In Polish tradition, a representative food from the Easter dinner is taken to church to be blessed.) Christianity and the origin of bats are also intertwined in the Mohammedan legend that Christ created a bat while keeping the fast of Ramadan. During this time eating food between sunrise and sunset is forbidden. Because mountains obscured the western sky, Jesus could not tell when the sun set. With God’s permission, He fashioned the winged likeness of a bat from clay and breathed life into it. The bat flew to a nearby cave, but each evening it emerged at sunset, telling Jesus that it was time to take food [see “Bats and the Netherworld,” BATS, Summer 1993; also, see this same article for the converse notion that the devil created bats.)

The apparent liminality of bats is also reflected in a legend from the Kanarese of India in which bats were originally a type of unhappy bird. These birds went to temples and prayed to be turned into humans. Their prayers were answered, but only in part; they were given teeth, hair, and human faces, but otherwise remained bird-like. They were then ashamed to meet the other birds and are now active only at night, returning to the temples in the daytime and praying to be turned back into birds.

In several other folktales, bats are banished into the night either as a result of some treachery or, as in the case of the Kanarese, because of embarrassment resulting from ill-advised behavior. In two fables from Aesop (born ca. 620 B.C.), the ambiguous nature of bats is transformed into duplicity in their character. One of these fables also exists, with slight variation, among tribes in southern Nigeria, among Australian aboriginals, and ancient Romans. The basic scenario is that, in a battle between the beasts and birds, the bat repeatedly changes allegiance so as to be on the side that appears to be winning. When a truce is declared, the bat is rejected by both sides because of this deceitful behavior.

In another tale from Aesop, a bat borrows money for a business venture that fails. The bat must then hide during the day to avoid creditors. Greeks and Romans often referred to people who were active at night as “bats.” Apparently many of these people had adopted nocturnal behavior to avoid those to whom they owed money. The Greek philosopher Chaerephon was called “the bat,” because he, like the animal, did not appear by day but instead hid and philosophized.

American Indian legends and the fables of Aesop were more than just stories recited around the campfire or bathhouse: they were teaching devices. For American Indians they provided information on the natural world and the behavior and habits of animals. Liminality aside, many of these myths have obvious roots in the real features of bats. Their well-known agility in flight would make a bat formidable in a ball game against a bear and turtle. The lack of feathers, presence of teeth, and activity at night are rooted in basic biology and natural history.

Pomo Indians of California have a myth that a bat could chew and swallow a large piece of obsidian and then vomit large numbers of excellent arrowheads. In his book Bats (1939), G. M. Allen speculates that this association of bats with arrowheads refers to the California leaf-nosed bat (Macrotus californicus). The prominent leaf nose on the snout of this bat strongly suggests an arrowhead.

In Myths of the Cherokee (1900), James Mooney points out that a general theme in American Indian folklore is that, in the beginning, there were no essential differences between humans and animals. Until we provoked the animals’ hostility because of our aggressiveness and disregard for their rights, humans and all creatures lived together in harmony, mutual respect, and helpfulness. Thereafter, humans and animals may have lived different lives; but like people, the animals still had tribes, councils, and ethics, and they played ball games.

American Indian legends and Aesop both gave animals human characteristics, including our failings, to teach moral precepts and the consequences of inappropriate behavior. While Aesop’s fables involving bats may have envisioned them as duplicitous and dishonest, other folklore has ascribed a lot worse to bats, as we have seen in this series of articles. The positive side is that by 600 BC., and probably before, humans were learning important things from bats. We still are.

[bio]
Gary F. McCracken is a professor in the Department of Zoology and the Graduate Programs in Ecology and Ethology at the University of Tennessee, Knoxville. He has studied bats for many years and is author of the entry on bats in The Encyclopedia of American Folklore and Superstition. 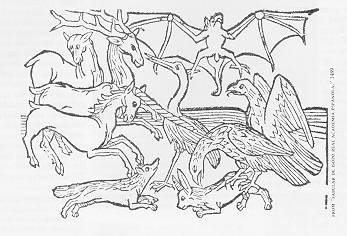 Above: In Aesop’s fable of a battle between birds and beasts, the bat was seen as duplicitous, unable to decide which side it was on. This folk theme reflects the common confusion over where bats belong in the scheme of nature. 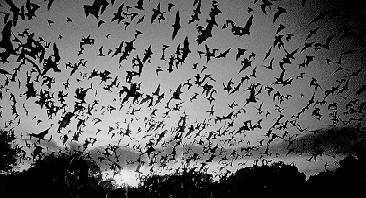 Bats not only fly like birds, they also have teeth like mammals. This combination made them special and formidable game players in many folk tales where the agile bat won the day. 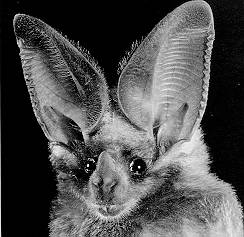 Many legends have their roots in the actual physical features of bats. A Pomo Indian myth tells of a bat that could swallow obsidian and then spit out perfect arrowheads, perhaps a reference to the prominent noseleaf of the California leaf-nosed bat (Macrotus californicus) found in their area.