As a tropical botanist, my interests in rainforest animals used to revolve almost exclusively around keeping them out of my tent at night. This narrow attitude was permanently shattered, however, when I became acquainted with the Samoan Flying Fox (Pteropus samoensis).

I will never forget the first time I saw one of these giant bats in the rainforest. One day, while climbing a tree, I saw what appeared to be an eagle flying away from a liana flower. The bat I saw in my field glasses appeared to have a wingspan of five feet or more and lacked the white fur on the back of the neck that characterizes the locally common flying fox, P. tonganus. This large bat was black and its behavior was completely unusual. I later thoroughly enjoyed watching them soar, eagle-like, high above the forest in midday sun.

In the following years, my interest continued. I found that these bats are diurnal and territorial and that they live in solitary, apparently strongly bonded pairs. In early March, 1981, while in the Tafatafa rainforest on Upolu Island, I found a roosting pair in a tree. One awoke and immediately flew. Nevertheless, when its companion failed to arouse, the first bat repeatedly returned, hitting it with its wing until the second bat awoke, and the two flew away together. Given the bats' fear of humans, who hunt them for food, the repeated attempts of one bat to arouse its companion, and their subsequent departure together suggested a strong pair-bond.

Many native hunters became aware of my interest in the Samoan Flying Fox, and as a result they brought me baby bats, orphaned when their mothers were shot. My wife Barbara began a bat nursery, much to the fascination of our two children. Six infant bats were fed human baby formula, and they preferred to nurse while hanging upside down on an outstretched arm. They also enjoyed being cuddled and stroked. Within several weeks, our bats would squeak with delight when they saw us coming, and as they grew bigger they would crawl across the mats toward us. Our whole family fell in love with them.

I was surprised to discover that P. samoensis was the primary pollinator of a liana (Freycinetia reineckei). William Burck, of the Buitenzorg Botanical Gardens, had described flying fox pollination of Freycinetia lianas in Indonesia nearly a century before, but his work had been discredited by Otto Porsch, who did not believe that organisms as large as flying foxes could function as pollinators. My three years of careful experiments and observations in Samoa, however, demonstrated that Burck likely was correct.

I knew that the social structure and territoriality of P. samoensis resulted in a limited population, but I became alarmed when I and several Samoan pigeon hunters began to notice sharp population declines. The combined effect of too much logging and hunting apparently was posing a serious threat. In 1979, in the mountains of Tapatapao, Upolu Island, over 30 P. samoensis were taken by hunters; in 1980 this figure dropped to 9; and in 1981 it dropped to zero.

This past July and August (1984), 1 spent several weeks searching the Tapatapao region for P. samoensis but couldn't find a single individual. Mr. Jack Netzier, Minister of Agriculture of Western Samoa, informed me, to my dismay, that commercial export of flying foxes to restaurants on Guam was being considered by the government, and that applications for licenses had been received. However, Mr. Netzier was personally very sympathetic to the need for preservation of P. samoensis and asked me to write a position paper for the Prime Minister.

In my report I expressed my fear that P. samoensis is on the threshold of extinction in Samoa. I know of one breeding pair on Tutuila Island in American Samoa, and I am yet hopeful that several exist in the forests of Tafatafa, on Upolu Island, although I haven't surveyed that area for over two years. I have not found any on Savaii Island, and it appears that the Tapatapao population is, or soon will be, extinct if logging and hunting continue. In the Manu's group of American Samoa I have spotted one individual on the island of Ta'u but have yet to survey Ofu or Olosega Islands.

If P. samoensis is to be saved from extinction, additional steps will be required. Surveys of remaining populations are urgently needed, and may be feasible from aircraft, since these bats like to soar high above the islands on afternoon thermals. Captive breeding should also be considered. Our experience suggests that this is indeed possible. Unfortunately our initial efforts met with disaster, since I was unable to obtain necessary custom clearances to import our small colony to the United States. When we left Samoa, the young bats were left with a local high school biology teacher for safekeeping. However, he tragically forgot to feed our bats one weekend, and all of them died.

The most important steps required to save Samoan Flying Foxes appear to be protection of their habitat from further logging encroachments and protection of the bats from hunting. The Government of Western Samoa is willing to consider conservation efforts, but will need outside funds to support the establishment of wildlife reserves or National Parks. Ideally, a joint conservation program should be initiated in both American and Western Samoa to bring P. samoensis back from the brink of extinction.

It is my sincere hope that somehow a way will be found to save these marvelous animals. They are important, not only as biological marvels, but also as major pollinators and fruit dispersers within the fragile Samoan rainforest. Without immediate outside assistance, the prospects for saving P. samoensis seem slim.

(Author's Note: Two specimens shot by hunters were confirmed as P. samoensis by Dr. Karl Koopman at the American Museum of Natural History. These had wingspans of only 3.5 feet, the size considered typical for the species. The larger bats that I observed appeared to behave like normal P. samoensis, however their size raises the possibility that my observations include a second, but undescribed endangered species. These findings emphasize the paucity of available information and the urgency of a thorough investigation.) 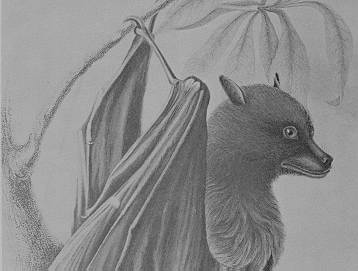 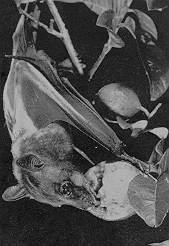 Zuri is a Straw-colored Flying Fox (Eidolon helvum) from Kenya. This species is vitally important, both ecologically and economically, throughout much of Africa for its seed dispersal and pollination services. Zuri and Rafiki (see opposite page) were brought to the U.S. in May 1984 by Dr. Merlin Tuttle and are already highly successful public relations representatives for BCI, having most recently appeared on the NBC David Letterman Show. Photo courtesy Merlin D. Tuttle.