BCI’s first One-day Bat Study Workshops were enthusiastically attended by 108 BCI members and friends at Washington, D.C.’s National Zoo this past April. Many participants came from the D.C. area, and others as far away as California and Arizona, to attend an intensive eight-hour workshop.

Dr. Brock Fenton, a member of BCI’s Scientific Advisory Board, and a team of six biologists from York University in Ontario, Canada, led each workshop. Participants worked with several live bats, adding appreciably to the experience and offering many their first chance to interact with these fascinating animals. The workshops offered a blend of lectures and small group activities, such as learning how to identify various bat species, and techniques for the study and observation of bats. Learning how bats echolocate was stressed so that participants could learn how to use bat detectors, small instruments that reduce the echolocation signals of bats to audible range. Working with live flying bats, as well as with prerecorded echolocation calls, attendees learned to distinguish the signals of various species.

Many participants came to the workshop to gain additional knowledge and experience for developing interpretive programs on bats. Professionals from state fish and wildlife departments, national parks, museums, schools, zoos, and nature centers attended the workshop. Others were simply enthusiastic members who wanted to gain additional information about the animals they help to protect through membership dues and other contributions. Group sessions allowed participants to network with others and relate experiences and aspirations for future work involving bats. They now have the resources to help educate others about bats and the basics to conduct interpretive programs in their area.

Those who missed the opportunity to attend the first workshops will be pleased to know that BCI is offering similar one-day workshops on the West Coast next spring. Utilizing conference facilities, we will be able to offer participants special hotel rates and a more complete workshop experience. The workshops will be held on March 23rd and 24th, 1991 in the Los Angeles area. For more information, look for the announcement in this issue or contact Janet Debelak, Education Assistant, at Bat Conservation International, 512/327-9721.
— Janet Debelak 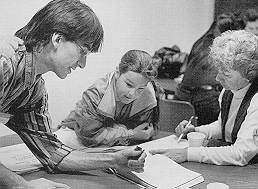 John Taylor (left) uses a live big brown bat to show the bat’s unique diagnostic characteristics so workshop participants will be able to make their own key to identifying these and other bats.