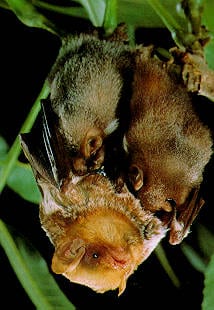 Early summer is when most North American bats give birth. The red bat (Lasiurus borealis) is one of the few that have multiple young; this one has only two, though triplets and even quadruplets are common. During the day, each young clutches th
e mother’s perch with one foot and holds on to her body with a wing. She leaves them alone at night when she goes out to feed, but if necessary, she will move them, the babies clinging tightly to her with their milk teeth. The pups begin flying at three t
o four weeks and are weaned only a few weeks later.