A glimpse at this select group of bats reveals efficient predators with a surprisingly gentle side . . .

For those of us who have come to know the true nature of bats, the images we conjure are of gentle, passive animals–silent, hovering nectar-feeders, gregarious fruit-lovers, or those delicate aerial acrobats, the insect-eaters. But for me, the most intriguing of all bats is a group of carnivores called the false vampires.

The name seems to suggest a harmless bat maligned because of an unfortunate resemblance to vampire bats, or so I had imagined. In fact, false vampires bear no resemblance at all to real vampire bats. They are powerful hunters–efficient predators that track and devour a diversity of small vertebrates. And yet, Merlin Tuttle, who has photographed or studied all of the carnivorous bats at one time or another, reports them to be some of the most intelligent and gentle bats on earth, ranking among his all-time favorites.

As it turns out, the “false vampire” name was merely an error. As early as the 16th century, there were reports of bats that drank blood, but the exact identities of these animals were not confirmed for more than 200 years. This led early biologists to mistakenly apply vampire-like names to a number of bat species. Almost anything with large canine teeth was dubbed a vampire, and, absurdly, many fruit-eating bats ended up with misnomers such as Vampyrops, Vampyrodes, and Vampyressa.

In truth, fewer than one percent of all bat species are carnivorous. The group of carnivores collectively known as false vampires are quite striking in appearance, with large ears joined at the base and long, fleshy nose leaves adorning their faces. False vampires from the Old World live in parts of Asia, Africa, and Australia. The Asian false vampire bats (Megaderma lyra and M. spasma) are found from eastern Pakistan, India, and Sri Lanka to southeastern China, Indonesia, and the Philippines. They weigh between 40 and 60 grams (about two ounces) and roost in caves, buildings, and hollow trees in small groups, although one particularly large colony consisting of nearly 2,000 M. lyra has been documented in India. These bats have a remarkably diverse diet, feeding on everything from insects, spiders, fish, birds, and frogs, to rodents and even occasionally smaller bats. They have been known to enter houses through open windows and, with incredible agility, pick small lizards and insects off the walls!

The African false vampire bat (Cardioderma cor) is found in East Africa from northeastern Ethiopia and southern Sudan to northern Zambia. Sometimes referred to as the African heart-nosed bat due to a large, heart-shaped nose leaf on the face, these bats are blue-gray in color and weigh between 21 and 25 grams (about one ounce). They have been found roosting in caves and hollow baobab trees in groups of up to 80 bats. Although they feed mostly on insects, they have also been known to eat small vertebrates. Like many insect-eating bats, the African false vampires are able to capture insects in flight as well as pick them directly off of vegetation. But their predatory skills are not limited to aerial excursions. Perched in low vegetation, they listen quietly for terrestrial prey. They can detect the footsteps of a large ground-dwelling beetle from more than six feet away, and quickly descend to capture their prey on the ground. Studies have suggested these bats form long lasting male-female pairs.

The Australian giant false vampire bat (Macroderma gigas) lives in Australia and New Guinea and is the largest of the Old World false vampire bats, weighing from 70 to 130 grams (as much as four and a half ounces). These bats have white hairs with pale grayish brown tips on the back, giving them an ashy gray appearance and the common name, the “ghost bat” (see photo on front cover). They roost in caves, rock crevices, and old mine shafts, and hang from trees or other vegetation watching for prey. They drop onto their quarry from above, then carry it to a higher perch or back to the roost to be eaten. These giant false vampires capture small mammals as well as birds and reptiles, but also eat large insects. Roosting in groups that range from about 150 to 1,500 individuals, this formerly widespread species is now known from only about 10 maternity roosts. Without careful protection of its few remaining colonies, this fascinating bat could become extinct.

There are also false vampires in the New World tropics. Peters’s wooly false vampire (Chrotopterus auritus) weighs between 72 and 90 grams (two and a half to three ounces) and ranges from southern Mexico to Paraguay and northern Argentina. This bat has a small wart in the center of the lower lip with a narrow elevation on either side. They roost in groups of one to seven bats and have been found roosting in caves, hollow trees, and even Mayan ruins. They eat everything from insects and fruit to mice, birds, lizards, frogs, opossums, and other bats. When filming this species for BCI’s documentary The Secret World of Bats, Merlin Tuttle was able to train one to come to his hand on call within just 30 minutes of catching it in a mist net in the rain forest.

One of the most impressive of the New World bats is Linnaeus’s false vampire (Vampyrum spectrum), which ranges from southern Mexico to Peru, central Brazil, and Trinidad. It is the largest of all New World bats, weighing from 90 to 145 grams (up to five ounces) with a spectacular three-foot wingspan. Unfortunately, this species is also highly vulnerable, often disappearing when rain forests are converted to agriculture. In Trinidad, these bats are sometimes thought to be ghosts, leading local people to search out and destroy their roosts in hollow trees.

The feeding behavior of Linnaeus’s false vampire was documented in a breeding pair kept in captivity. They were observed crawling stealthily down the wall within a few centimeters of the floor and waiting for the prey–a bird or a rodent–to pass underneath. The bat would drop onto it, kill it with a quick bite, then carry it back to the roost to be eaten.

There was a surprising gentleness, however, displayed by both the male and female of this breeding pair. Both were exceptionally solicitous of their young. The male was observed bringing food to the female and wrapping his large wings around both mother and pup. Observations in the wild also suggest that the adults, both male and female, may take turns guarding the young at the roost while their mate goes out to hunt, returning with food to share. Merlin Tuttle reports the ease with which he was able to gain the trust of one of these bats soon after releasing it in his photo studio. Within a single evening, this daunting bat with quarter-inch canines was stepping onto Tuttle’s finger when approached.

False vampires are not the only carnivores of the bat world. There are a few specialized fishing bats (Noctilio leporinus, Myotis adversus, and M. vivesi) and other unusual carnivorous species, including, for example, some of the slit-faced bats (Nycteris)–so named because of a long furrow that runs the length of the muzzle from the nostrils all the way to the forehead. The carnivorous slit-faced bats are found throughout most of Africa and parts of the Middle East. They feed on a variety of insects and small vertebrates, and have been found roosting everywhere from hollow trees to porcupine and aardvark burrows!

Another carnivore, Gray’s spear-nosed bat (Mimon cozumelae), ranges from southern Mexico to northern Colombia and in eastern South America. It weighs between 21 and 23 grams (less than an ounce) and has whitish patches behind the ears and long, wooly fur. This poorly studied species is believed to eat a variety of insects and small vertebrates. It normally roosts in groups of two to four in caves, but has also been found in highway culverts.

The fascinating frog-eating bat (Trachops cirrhosus) analyzes frog calls and can safely discriminate between poisonous and non-poisonous species. A single frog-eating bat is capable of consuming an incredible 30 to 40 frogs in one evening! This species is also surprisingly gentle as well as intelligent. While photographing frog-eating bats for a January 1982 National Geographic article, Merlin Tuttle was able to train these bats to come to his hand on call within two hours. After another hour, he had trained them to go to wherever he pointed on command. He even taught them to listen for the sounds of movie cameras as their cue to hunt. The bats would wait on their perches until they heard the camera start, then fly to wherever they had previously seen Tuttle point. In just a few hours, these bats had learned responses completely foreign to their nature in the wild.

Since learning about the clever and gentle side of the false vampires and other carnivorous bats, I can’t help but think what a shame it is that these bats are so little known and appreciated. After all, many people revere raptors and other mammalian carnivores. One of the most treasured animals in the United States is a meat-eating bird: our national symbol, the bald eagle. For me, carnivorous bats represent the bald eagles of the bat world–rare, magnificent, and deft hunters worthy of our admiration. 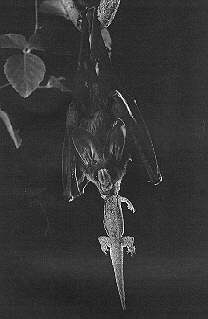 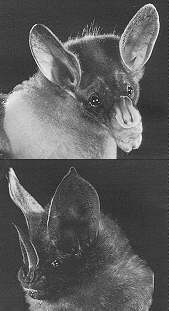 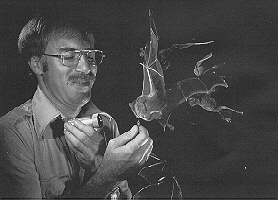 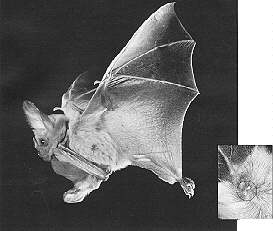 An African heart-nosed bat pup clings to its mother as she flies. Female bats of this species have ”false nipples” (below) that a pup can grip while in flight, allowing it to hang onto its mother’s neck. The mother’s actual mammary glands are on her chest (one can be seen here as a small round spot in the fur). 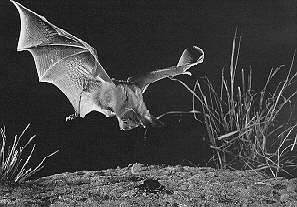 The African heart-nosed bat can hear the footsteps of a beetle walking on sand from a distance of more than six feet.