“No ma’am, bats don’t make nests in sofas.” Nor do they chew holes in walls, chase children and pets, or suck human blood— but questions like these are common for BCI’s public information staff. Every week they respond to hundreds of calls, letters, and e-mail queries from citizens, educators, corporations, and a variety of government agencies, with requests ranging from the urgent to the humorous. One worried caller contacted BCI because he was told that to get rid of the bats living in his summer cottage, he would have to burn it down. Obviously, the hapless homeowner had been given incorrect information—a common occurrence.

Although we’re always eager to share our expertise, providing these services is a daunting task. Each month, BCI receives an average of 1,400 letters and 1,800 phone requests for general and scientific information about bats. Of these, more than 400 involve conservation needs, nuisance problems, and public health emergencies that require special handling by our Conservation Information Coordinator, Barbara French, our Public Information Officer, Bob Benson, or one of our six other backup staff specialists.

Many of these calls are simple cases of mistaken identity. Once, a rock-quarry worker wanted to find out how to get rid of “all the bats making a mess in our quarry.” When asked to describe the situation, the caller said, “They keep messing around in the puddles, then they fly up to the cliff and smash mud all over the place.” Barbara French asked if these activities were occurring in the daytime. “All day long,” the caller responded. French smiled—bats in the daytime? “No sir, what you have are cliff swallows.”

On another occasion, a panic was set off by “screaming bats swarming around the streetlights” of an urban neighborhood. Parents were forbidding their children to go outside in the evening. “It’s a swarm of rabid bats,” the upset caller insisted to French. “They’re making a loud, whistling noise and swooping close to the streetlights.” The witness described the animals as having white markings on their wings. With that clue, French knew immediately that the frightening creatures were only hungry nighthawks hunting for insects.

Sometimes, however, bats really are the culprits—most often annoying homeowners by roosting where they are not wanted. In years past, people who discovered bats in their houses would probably call one person: the local exterminator. These days, thanks in part to BCI’s public information efforts, more and more people are investigating the alternatives. The most successful of these is the exclusion method, a simple way of netting roost exits to prevent bats from re-entering their roost sites. Exclusions are a humane and effective way to rid a home of unwanted bats, and detailed instructions are provided in BCI’s “Dealing with Unwanted Guests” brochure. French estimates that the exclusion information BCI has provided this year alone has saved many thousands of bats. “Dealing with Unwanted Guests” is just one of our “Facts on the Fly” brochures, which cover topics ranging from student reading lists to public health information. The brochures were created to provide the maximum amount of information to callers while minimizing time demands on staff members.

It is our hope that recipients of the brochures, and of course our members, will help pass on correct information to their communities, their local animal control and public health officials, and the press. Because many people get their introduction to bats through the media, it is critical that writers and reporters have accurate and complete information. It falls to Bob Benson, our Public Information Officer, to contain false news reports and articles—as our progress can easily be reversed by even a few irresponsible journalists. In the early ’90s the popular columnist Ann Landers published a letter from a man who claimed he was attacked by a fruit bat in Austin, Texas. (The flaw in this claim is probably apparent to many of our members.) Landers’ response was a perfect example of the ignorance and prejudice facing bats. “Bats were never very high on my hit parade,” she wrote, and in a later column described bats as “unappealing and just plain ugly.” Of course, her comments caused an avalanche of mail from our members as well as an official reply from Benson. Landers was so overwhelmed that she vowed to never mention bats again and asked people to stop sending her bat-related mail (BATS, Summer 1990).

One of the most damaging stories in recent BCI history came from Michigan in 1993. It was reported that gases from bat guano had caused the explosion of an abandoned park headquarters building (BATS, Spring 1994). The story was circulated nationally by the Associated Press, which led media personalities such as radio commentator Paul Harvey and syndicated columnist Dave Barry to pick it up. Suddenly, park officials were deluged. “We got calls from all over the world,” park manager Wayne Suida later told a reporter. As is often the case with negative media attention, BCI members sent us clippings of the story and asked us to come to the bats’ defense. The public information staff responded and, with Merlin Tuttle’s help, prompted officials to reopen the case. Investigators determined that the blast was caused by the accidental ignition of methane gas from the septic system—the bats were vindicated. It is difficult to imagine how many bats could be exterminated as a result of even one such alarming story.

Because of BCI’s reputation for responding to conservation emergencies, our members and concerned citizens, as well as government and private organizations, often warn us about potential problems. Such was the case when Steve Smith, a cave explorer, alerted us to his discovery of a bat colony hibernating in an abandoned mine. The mine, in upper Michigan, was scheduled to be bulldozed shut, burying the sleeping bats (BATS, Summer 1993 and Winter 1993). Having nowhere else to turn, Smith called BCI to see if the bats could be saved. After BCI’s public information staff contacted the Michigan Department of Natural Resources, Merlin Tuttle and state biologist Bob Doepker examined the site and met with the community. In the summer of 1993, a bat-friendly gate was installed on the mine, protecting what turned out to be one of the world’s largest known populations of hibernating bats.

The threats facing bats aren’t always as dramatic as imminent life-or-death situations. BCI staff frequently advise government agencies and private organizations on how land development and possible loss of habitat might affect future bat populations. Recently, the U.S. National Park Service turned to Barbara French for recommendations on how to carry out a 900-acre controlled burn without harming the bats roosting in the area’s abandoned gold mines. This past summer, the U.S. Environmental Protection Agency (EPA) requested our input for a review of an environmental impact statement on the gypsy moth, a costly forest pest that potentially puts hundreds of millions of acres of hardwood trees at risk. The EPA hoped to obtain information on how varied methods of controlling the moth might affect bats. French did extensive research on the proposed pest-control substances and suggested approaches that would minimize harm to bats and other wildlife.

French’s work over the past year with the Sustainable Biosphere Initiative (of the Ecological Society of America) has resulted in an important advancement for bats—their inclusion in rapid assessment guidelines. Rapid assessment teams inspect areas being considered for development to evaluate the potential impact on wildlife. Bats had been largely ignored by these evaluations in past years. The new information that French has compiled, particularly regarding seasonal use of caves and mines, will be included in a training manual distributed to thousands of assessment personnel.

Perhaps the most important, as well as challenging, issue for BCI’s public information staff is public health, which typically involves concerns about rabies. Most people’s fears about rabies are founded in paranoia and ignorance rather than fact. One man in Illinois feared that he would need rabies treatment because a drop of water—which he suspected was bat urine—got into his eye while he was shoveling snow. “When did this happen?” was the first question from BCI staff. “Oh, about noon,” the man replied. Bats out during the daytime in the middle of winter? The staff member assured the caller that no self-respecting bat would venture out under such conditions and that the water must have come from another source.

While the possibility of rabies exposure always warrants caution, a needless panic can prove costly. For instance, when bats flew over spectators at a Central Texas football game, local officials recommended rabies vaccinations for hundreds of people. In fact, they wasted a large part of the small community’s limited financial resources for the year before BCI staff referred them to appropriate public health authorities. Rabies experts assured the citizens that vaccinations were not required. If BCI had not assisted in this case, 800 people might have unnecessarily received post-exposure vaccinations, costing over $650,000.

In Chicago in the early ’80s, a surge of rabies cases in household pets caused more than 100 area residents to be vaccinated against the disease. A local official speculated that bats were the cause even though no bats had been present. Beloved family pets were destroyed because their owners feared they would transmit rabies to family members. The grief inflicted by the “outbreak” was extreme and particularly overwhelming for one family. After spending $4,000 in veterinarian bills only to lose their purebred poodles, they had to pay an additional $8,000 in medical bills for the inoculations of 15 people who had come in contact with their dogs. To compound their worries, doctors were uncertain if a one-year old relative would survive, because of a kidney disorder that made successful treatment questionable. Merlin Tuttle complained to a rabies expert about the fact that bats had been blamed for the outbreak and questioned local health department conclusions. As a consequence of that conversation, the Centers for Disease Control in Atlanta repeated the tests and ruled out rabies in all 10 suspect cases—discovering that the laboratory diagnoses had been incorrect. BCI’s intervention prevented more people from being inoculated and saved countless other pets from being euthanized.

In the past year, a number of highly publicized cases of rabies have caused a dramatic increase in requests for information about the disease, making “Bats and Public Health Concerns” BCI’s second most widely distributed “Facts on the Fly” brochure. While we do not offer medical advice concerning rabies, we do provide current facts about bats and the disease and provide referrals to specialists when needed, enabling callers to make well-informed decisions.

A wide variety of groups rely on BCI as their primary source of bat-related information—wildlife organizations, pest control companies, and public health departments, just to name a few. From Togo, Africa to the Slovak Republic, requests come from all corners of the globe. It costs BCI $44,000 annually just to respond to the roughly 400 requests per month that require special assistance. We are able to raise about half this amount through general member revenues and rely on special grants and donations to cover the remainder. If you would like to make a contribution towards this vital information service, please contact Robert Benson. 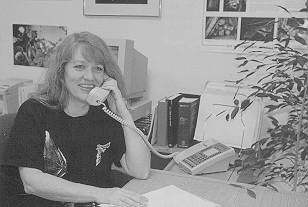 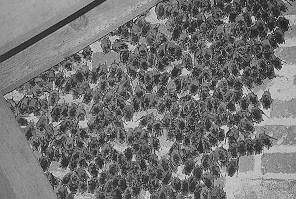 Bats roosting in attics, like these Yuma bats (Myotis yumanensis), often prompt homeowners to seek advice on how to safely remove them. BCI provides exclusion information and referrals to reputable pest control companies. 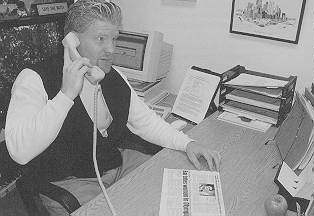 People from all over the world call Bob Benson, BCI’s Public Information Officer, to alert him to negative media stories about bats. Here, Benson helps a reporter working on a story about rabies. 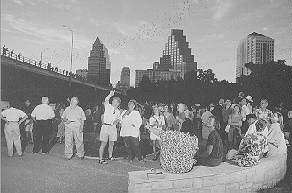 Bats and people can live in harmony with minimal risk, as demonstrated every summer in Austin, Texas, where thousands of visitors gather each evening to watch the emergence of approximately 1.5 million Mexican free-tail bats. With funds from local sponsors, BCI provides an interpreter and special educational brochures.