WHEN THE MAY 1992 issue of Pest Management magazine devoted 11 pages to articles about the value of bats, it was clear that attitudes were changing in an industry historically dedicated to destroying bats. For decades pest control operators (PCOs) had too often perpetuated nightmarish myths about the dangers of bats, whipping homeowners into a frenzy and then charging them large fees to kill their bats with dangerous poisons. Now many of these business people have learned that America’s insectivorous bats are, as the article stated, "nature’s own PCOs" and in need of protection. The use of poison to kill bats has been banned in Canada and most of the United States, and abuses of these laws are in decline.

Unfortunately, few PCOs have taken the next step of doing bat exclusions for their customers. Consequently, homeowners often have difficulty finding someone to help them evict bats that are becoming a nuisance. Marshall Hanks of Wisconsin and Charles Robertson of Ontario are among the rare PCOs who specialize in bat exclusion; each of them has handled more than 1,000 such jobs. 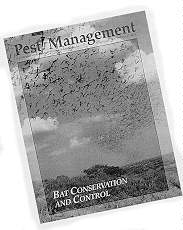 Hanks, a longtime BCI member, explains that the reason most pest control companies won’t work with bats is because they already have lucrative services that guarantee repeat business. "The whole industry is built around the monthly service concept," he says, "With bugs and other pests, the PCO gets to come back every month. With bats, if you do it correctly, there shouldn’t be repeat business."

Charles Robertson warns that some PCOs offer bat exclusions but do the job improperly or incompletely and give weak guarantees. People still put up with imperfect "solutions" to their bat problems simply because they are so afraid of bats. "I don’t care how much it costs," is a common plea of uninformed homeowners. Both Hanks and Robertson have numerous stories about irrational things people have done out of fear, such as the one about an ex-police officer who shot up his house with a .38-caliber revolver (with plastic bullets) trying to kill bats. Most of these people’s problems could be solved overnight with a simple exclusion procedure.

Once Hanks got a call from an elderly man in Connecticut who was determined that, before he died, he was "going to get the best of those bats in the attic." Already carpenters had spent two days caulking and patching crevices all over the house. When that didn’t work, the next company he called quoted $19,000 to completely tear off his roof, clean out the bats, and then put on a new roof. The man flew Hanks to Connecticut, and in only minutes, Hanks uncovered the truth behind the homeowner’s bat "evidence." The constant droppings on the white bedspread? Merely particles from the knotty pine ceiling above, where some insect was boring a hole. The droppings outside the house? A carpenter bee. The constant squeaking? Tree branches scraping against the bedroom windows on either side. There had never been any bats at all. The homeowner considered Hanks’ plane fare and expenses to be money well spent.

When Hanks can’t go to the customer, he often instructs people on exclusion procedures over the phone. The key to success is having the patience to watch where the bats exit from the building at night. There are often many openings in a building, but bats will typically only use one or two. Watch for several nights, he tells them, and count the bats. Seal up all but the one or two openings they are using, then put exclusion valves on those.

Robertson, an honorary research associate for BCI’s North Ameri-
can Bat House Research Project, encourages the use of bat houses after an exclusion. "I had been doing exclusions without bat houses for years," he explains, "until some of my customers began asking what to do about the bats hanging under the eaves of the house–they were congregating near their old exits. As soon as we put bat houses up near those exits, the bats moved in. Every bat house I’ve ever put up after an exclusion has been occupied."

Additionally, Robertson says, a bat house offers a sort of insurance. "It’s possible for any excluder to miss a half-inch gap here or there. With bat houses installed, it’s more likely that the bats will be content with their new home and won’t try to get back into their old one."

Robertson’s exclusion successes include a German castle, a WWII bunker, and a cathedral where the bats took flight every time the organ was played. Stadiums, skyscrapers, and entire universities are among Hanks’ more interesting exclusion jobs. Both men have lengthy reference lists of satisfied customers. Says Hanks, "I solve their problem and guarantee it. Apart from the state lottery and its million-dollar winners, I think I have the happiest customers in the world."

If you need the services of a bat exclusion specialist, ask the staff of a local pest control company if they know anyone who handles exclusions. If they don’t, call BCI–we may be able to recommend someone in your area. Before you hire an excluder, be sure to ask for references. It is also a good idea to ask whether the excluder is a member or affiliate of any reputable wildlife-related organizations and how much construction experience or training he or she has. Merlin Tuttle’s book America’s Neighborhood Bats has directions on how to do simple exclusions yourself, as well as advice for finding reputable assistance. 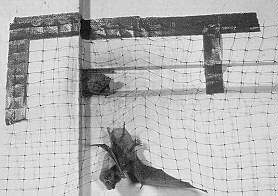 Exclusion specialists often spend years refining designs for their own custom "excluders," but anyone can make a basic exclusion valve with just a few simple materials.

After you have determined the bats’ exit points, cover these spots with polypropylene bird netting (available at garden centers or hardware stores). Secure the netting several inches above the hole with staples or tape (as shown above). Let excess netting hang loose at least a foot to each side and below the exit. The netting acts as a one-way excluder. Make sure that this work is not done in June or July, when flightless young may be present. For additional information, call BCI at

(512) 327-9721 and request our Facts on the Fly brochure entitled Dealing with Unwanted Guests.

If you want to install a bat house as well, BCI’s Bat House Builder’s Handbook offers plans, advice, and answers to frequently asked questions. The 1996 revision includes new, simpler, and less expensive bat house plans as well as updated research findings. In the U.S., call 1-800-538-2287 to order a copy. From other locations, call (512) 327-9721.