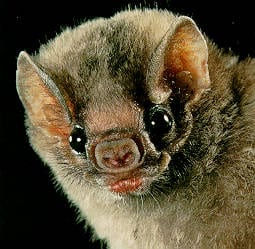 There are just three species of vampire bats in the world, and they are found only in Latin America. With its large eyes and relatively long fur, the hairy-legged vampire (Diphylla ecaudata) doesn’t provoke as much fear as its cousin, the notorious common vampire (Desmodus rotundus). Hairy-legged vampires also feed upon blood, but only that of birds. They are not as gregarious as common vampires, preferring to roost in small groups of 12 or fewer. Little is known about their ecology and behavior, and they are uncommon.