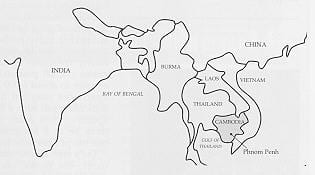 In 1993 I was lucky enough to become involved in the conservation of a bat colony of global significance, located in the National Museum of Cambodia, in the city of Phnom Penh. Whenever I am asked the question, "Are bats useful?" I use this colony as an example.

The Australian government was restoring the roof of the National Museum as part of an overseas aid project, and I was asked for advice about bats in the attic. It’s a huge building, shaped like a square doughnut, with a 300-foot frontage. The original 1918-vintage roof tiles were leaking, and rain was washing bat guano from the roof space onto fourth-century Khmer artwork displayed inside the building.

When I first arrived at the museum, I was astounded at the size of the bat colony. As I explored the roof space, there were thousands of bats wherever I looked and massive heaps of guano on the floor. I was initially asked to advise on how to remove the bats, but I cautioned the engineers that removal was unlikely to be an acceptable solution. I then made several counts of the colony, using different methods to estimate numbers. The grid of roof beams and tile battens made for convenient sampling. When I multiplied the sample counts over the total roof area, the population estimate came to 1.5 million. Also, I discovered that among the four resident bat species was what appears to be a new species of free-tailed bat (family Molossidae, genus Chaerephon).

For a second population estimate, I used a video camera at dusk to film the bats’ emergence from the museum. With imaging analysis software on my computer, I could count each of the black-dot bats on the video. Although bats had continued to emerge long after it became too dark for the camera, I had used a bat detector to tell when the last individuals made their exit. The two-hour emergence increased my estimate for the size of the colony to slightly under two million bats.

But in what way is this large colony useful? First we must consider why the bats occupied the building in the first place–more than likely because of the loss of forest habitat surrounding Phnom Penh. Replaced with vegetable gardens and rice paddies to serve the city, many tree roosts may have been lost. Ironically, the bats now support these important resources, both economically and logistically, by consuming insect pests.

Each free-tailed bat weighs about 25 grams. Eating half its body weight in insects a night (probably an underestimate), would mean the entire colony consumes about 17,500 kilograms (38,500 pounds) nightly. This equates to about 6,000 metric tons of insects per year, but it is sometimes difficult to put such a figure into perspective. How many insects would there be in a kilogram? What does one ton of insects look like?

Let’s use a new unit of measurement–the motor car. A standard-sized family car in Australia weighs about 1.5 metric tons, so the colony is eating the equivalent in weight of insects of about 4,000 family cars. The parking lot at my local shopping mall has capacity for 800 cars (according to the mall manager). Picture a parking lot five times as large, and you have an idea of the ground 4,000 cars would cover. Now let’s imagine that instead of cars, we have piles of insects that take up the same weight. Consider how much ground 4,000 heaps of insects would cover!

In the end, it doesn’t matter exactly how large this area would be–merely that it would be immense. Now imagine that these huge heaps of insects are all alive, and must be killed to protect crops. Thousands of gallons of insecticide must be purchased, trucked in, and sprayed over vast tracts of land, while ensuring that none of it pollutes the local environment. After all of this, there remain millions upon millions of dead insects to clean up. The Phnom Penh bat colony does all of this for free, without chemical pollutants. Meanwhile, they are converting the insects to guano, which is useful as fertilizer. And who buys it for fertilizer? The vegetable and rice farmers surrounding the city.

My recommendation, approved by the Australian government, was to construct (at great expense) a special"bat floor" to seal the colony and its droppings from the artwork, and to make it easy to remove the guano. I heard one report, not long after the project was finished, that three truckloads of guano were removed after just a few months and that the sale of this fertilizer would pay for about one-third of the annual operating costs of the museum.

This story certainly demonstrates the ultimate in recycling and is a prime example of the economic value of bats. One can envisage that if this colony were removed or destroyed, vegetable production would decline and prices would increase due to shortages of produce and added costs of insecticides. In addition, the insecticides would eventually pollute the nearby Mekong River. These bats have an impact not only upon a major city, but also on people and towns downstream who would otherwise bear the damage of the pollutants.

I rest my case.

When Greg Richards wrote the "Case Study from Cambodia" article (preceding pages) in late 1997, it seemed there would be an uncommonly happy ending for the bats and their landlords at the National Museum of Cambodia. During the last six months, however, Richards, BCI, and other concerned parties around the world have been dismayed to discover that everything did not go according to plan.

Early in 1998, we learned that construction of the new roof and Richards’ new floor design had been inadequately supervised. As a result, neither is functioning correctly, and rain still leaks in and washes bat droppings into the museum. As we wrote, faxed, and phoned back and forth among colleagues on four continents about how to address this problem, news reports began trickling in from alert BCI members and others, indicating the situation was more dire than we first thought. The most alarming was a clipping from the February 26 South China Morning Post, mailed to BCI by member Marshall S. Berdan of Hong Kong. In the article, National Museum director Khun Samen is quoted as saying that he must act decisively before a priceless collection of ancient statues on an international tour returns to the museum. "We do not want to kill them," Samen says in reference to the bats, "but they are not welcome anymore." A similar call for eviction was echoed in the Phnom Penh Post in March.

In fact, eviction would be very difficult in this situation. Like most buildings in tropical climates, the museum has countless ventilation sites, and to successfully "exclude" the bats would require sealing off every tiny entry hole. Further, if the bats were evicted, most would die, unable to find a new home in tree foliage, as implied in some media articles. Although construction of an alternate bat roost might save the bats, many would still attempt to get back into the museum.

The best hope for a satisfactory conclusion to this story may come from France. Colleagues in Phnom Penh report that a division of the French government concerned about the upcoming art exhibit has decided to fund the necessary repairs for the defective roof and attic floor without evicting the bats.

While we eagerly await the fulfillment of this positive plan, BCI and Greg Richards have been working with ecologist Colin Poole in Phnom Penh to publish conservation-minded articles about the issue in both local and European media. The articles should increase public awareness of bats’ ecological contributions and encourage all concerned to safeguard the bats while protecting the museum’s priceless artwork.

In a region so remote and politically sensitive, there has been no easy way for BCI to offer mediation in resolving this difficult issue. In such cases, one of the most constructive things we can do is support and appreciate those who take action on behalf of bats. If you would like to send a short letter thanking the French government for their generous plans to repair the museum ceiling and protect the bat colony, we invite you to write to the French ambassador to Cambodia at the following address:

BCI would like to thank the many members who took the time to send us news clippings or otherwise alert us to the plight of this bat colony during the past two years. We encourage members to notify us of conservation-related emergencies. Although we cannot always thank you directly, please know that all information receives prompt attention and is appreciated. In the past, such notices from members have led to some of our greatest conservation successes. Please mail to:

We hope to report further good news about the museum colony in future issues of BATS.

[author bio]
Greg Richards is an independent ecological consultant and wildlife researcher in Canberra. He has worked with bats for nearly 30 years in Australia, with studies taking him to Europe and several other Southeast Asian countries. 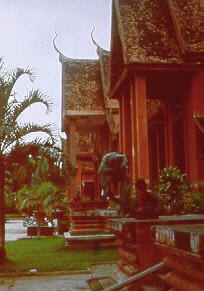 The National Museum of Cambodia has a typical Southeast Asian style of roof, with sections offset for ventilation. The offset provides entry and exit points for bats. 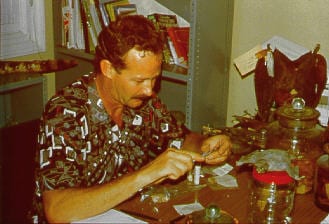 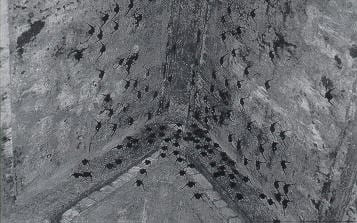 Just a few of the nearly two million bats that roost in the attic above the museum.