The endangered Gray Bat (Myotis grisescens) was once one of the most abundant mammals of the southeastern U.S. People in at least five states, especially Alabama, Tennessee and Missouri, viewed hundreds of thousands passing over in great columns each summer evening. These bats also played an important role in the checks and balances of nature as the primary controllers of night-flying aquatic insects, including mosquitos. Single colonies consumed literally tons nightly.

Until the arrival of man, caves remained the secure bastions of this dominant species. Problems apparently began when aboriginal tribes first camped or lived in the entrances of large caves. Some Gray Bats likely perished through suffocation when smoke from fires penetrated their previously safe living quarters, while others apparently ended up in Indian stew pots. Nevertheless, the majority remained out of reach in deep, dark caves.

It was modern man that made the real difference. During the Civil War, guano for gun powder was extracted from nearly every substantial Gray Bat cave in the South. Large guano accumulations in these caves undoubtedly prolonged the war by providing a reliable source of saltpeter long after importation had been cut off. Without a doubt, Gray Bat colonies suffered some of the biggest losses of the Civil War.

Following the war, the Gray Bat, a highly resilient species, once again was able to prosper, as evidenced by the conspicuous replacement of large guano deposits in most formerly occupied caves. Modern man had arrived, but he, for the most part still feared and avoided the dark inner reaches of caves.

Early Studies
My personal introduction to Gray Bats occurred when my family moved to Knoxville, Tennessee and lived near Baloney Cave. I soon joined high school friends in exploring this and other caves, quite unaware of the potential harm that could result to bats from our often poorly timed trips. I was particularly fascinated by the spring and fall appearance of several thousand Gray Bats that would mysteriously disappear in only a few days.

My fascination quickly grew, eventually leading me to search out and visit 120 Gray Bat caves in six states, while banding 40,182 of these bats in a study that spanned 20 years.1 I learned that they are highly selective and require unique cave types, using 0.1 % of available caves in winter and 2.4% in summer.2 At least 95% of the entire known species population hibernates each winter in just nine highly vulnerable caves, with more than half in a single cave.3

Undisturbed colonies typically contain tens of thousands of individuals, sometimes hundreds of thousand S.2 More than any other American mammal, they require caves year-round. For their size, they are among the world's slowest reproducing mammals. Mothers usually do not produce their first offspring until they are two years old and require five years to leave just two that survive.3 Furthermore, large numbers, often many thousands, are required in order to share the cost of heating a roost. When numbers fall too low, growth of young bats slows unacceptably, and the remaining colony dies out, leading to a threshold phenomenon sometimes referred to as the "passenger pigeon effect".3,4

By the late 1950's the popularity of cave exploration was rapidly increasing. Unfortunately, one of my earliest observations was that the frequency of human visitation of caves was highly correlated with the disappearance of Gray Bat colonies. In the early 1960's I often found vast quantities of guano in caves that obviously had not been occupied by bats for several years. At first, I, like others who explored caves, believed that the bats had simply moved to other caves.

However, given their highly specific roost needs, few colonies have suitable options. Caves not already occupied are too warm or too cold, located too far from feeding areas, lack appropriate roost surfaces, are too vulnerable to predation or are too disturbed by people. In fact, my banding studies documented that evicted colonies seldom survive .2

For example, when Hambrick Cave, near Guntersville, Alabama, became heavily disturbed by people, its large Gray Bat nursery colony disappeared within a year. A high proportion of these bats were banded, enabling me to trace their survival. Through banding studies, I already had established their seasonal movement patterns and also had documented loyalty for life to whichever hibernating cave was selected in their first winter. After losing their nursery cave, these bats disappeared from their traditional hibernating caves, demonstrating that they had not survived by merely moving to another summer cave.5

Decline Documented
Seeing such dramatic losses, and realizing how needless most were, I became alarmed and determined to do something. First, I needed clear documentation of the extent and causes of decline. In 1976, I revisited each of the 22 colonies (from the original 120) that I believed would be least likely to have declined since my last census in 1970. Even these colonies had declined by an average of 54% in just six years!2 If all 120 colonies had been censused, I likely would have found that most had disappeared entirely, as shown in a similar survey in Kentucky.6 The few that had escaped human disturbance remained stable, while hundreds of thousands had disappeared from the most heavily disturbed sites. The relationship between human disturbance and colony decline was undeniable.2

I sampled guano from these caves and sent it to Dr. Don Clark at the Putuxent Wildlife Research Center for pesticide residue analysis. Several colonies showed potentially dangerous levels of toxins, ranging from organochlorine pesticides to PCB's and lead, but the influence of human disturbance completely overshadowed our ability to assess any measurable impact from toxins.2 By this time we knew that pesticides were killing some Gray Bats7 but probably not as many as had died from roost disturbance by people.2,8

Protection Provided
Regardless of why, it was clear that Gray Bats were seriously endangered. At my request, the U.S. Fish and wildlife Service officially listed them in 1976. Although most conservation organizations were not yet ready to help anything as unpopular as bats, the Tennessee Valley Authority responded to my requests for assistance and played a leading role in saving these bats. With in two years, they had funded a major study of foraging habitat and had provided excellent protection for such vitally important sites as Hambrick and Nickajack Caves, where past nursery colonies likely totaled at least a half million or more.

The Fish and Wildlife Service soon acquired and protected Blowing Wind and Cave Springs Caves, where past nursery populations exceeded a total of half a million Gray Bats, and New Fern Cave, site of the world's largest known hibernating bat population, which alone sheltered an estimated 1.5 million Gray Bats as recently as 1969. The Nature Conservancy, with BCI assistance, acquired and protected Judges Cave, housing the most important remaining nursery colony in Florida, and Hubbards Cave in Tennessee (See BATS, December 1985). Hubbards is one of the species' three most important hibernation sites. State non-game wildlife programs also played important roles in Gray Bat protection, especially in Florida, Missouri, Arkansas and Tennessee

Success
It has been argued that remnant populations of endangered bats likely could not reestablish themselves, even if provided adequate protection from human disturbance. Therefore, it is exciting to report enormous success over the first nine years of protective efforts for the Gray Bat. For example, of the four protected summer caves (Hambrick, Nickajack, Cave Springs, and Blowing Wind), three had entirely lost their nursery colonies by 1976, and Blowing Wind had been reduced to bachelor use by approximately 128,000 bats, only a fraction of former numbers. With protection, all four caves are now occupied by large nursery colonies that totaled 692,000 in 1985.9 Without protection, it is unlikely that any of these bats would exist today, yet they alone consume nearly a million pounds of insects over Alabama and Tennessee reservoirs each summer. (Hubbards and New Fern Caves are extremely difficult to census accurately, hence their omission from regular censusing.)

Increasing cooperation from organized caving groups is encouraging. For example, the Tennessee Cave Survey now includes identification of sensitive bat caves and dates when they can and cannot be visited without harm to bats. Education of the public and cooperation between professional cavers and management agencies also is on the increase.

In most cases, Gray Bats apparently can be reestablished even where pesticides have been implicated as especially problematic, as was well demonstrated at Cave Springs Cave. Guano samples from this site contained the most pesticides and other pollutants of any examined, 11 yet simple protection from disturbance permitted colony reestablishment. Thousands of these bats apparently died of poisoning this summer, so it cannot be said that toxins are no threat, just that they are not yet an insurmountable obstacle.9

A remaining concern is that gates to prevent untimely human intrusion into caves can cause more harm than good, when improperly designed. We now know that gates must allow adequate fly-over space to be tolerated by Gray Bat nursery colonies.2,10 Some early gates must be removed, as they are excluding bats from formerly important roosts. Fences generally have been effective only where adequate patrolling, signs and law enforcement were provided, though signs alone have helped in some cases, especially where there are cooperative land owner agreements. Gray Bat intolerance of full gates at nursery caves continues to be a major obstacle, though properly designed gates at hibernating sites, such as the one at Hubbards Cave, seem to be working well.
Unfortunately, many Gray Bat nursery caves and some important hibernation sites remain unprotected. In many of these, colonies already are gone or continue to decline rapidly. Much remains to be accomplished before the Gray Bat and others are truly safe.

Editor's Note: BCI members, Bob Currie (Acting Area Manager, Asheville Office), and Fred Bagley (Wildlife Biologist, Jackson Endangered Species Office), of the U.S. Fish and Wildlife Service, and Ralph Jordan (Project Manager, Streams, Trails and Natural Heritage, Tennessee Valley Authority), deserve special credit for much of the success in saving Gray Bats. We thank them and the many other individuals and organizations who have helped. 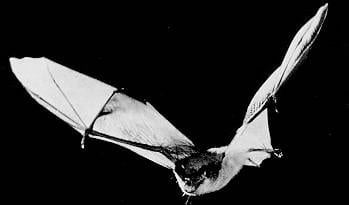 A Gray Bat emerges from its cave to feed. just one can catch up to 3,000 insects in a night.
Photo by Merlin D. Tuttle. 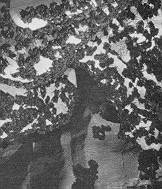