“Helping bats is clearly one of the things we can do as natural resource managers to help ecosystems as a whole,” said Fred Stabler, wildlife biologist with the Bureau of Land Management (BLM) in Washington, D.C. “Bats are pollinators, they help control harmful insects and they’re important to forest health. Bats are significant, and it is easy to explain to people why.”

In August 2000, Stabler received BCI’s Distinguished Service Award in recognition of more than a decade of conservation progress on federal public lands. His accomplishments include promoting conservation of abandoned mines as bat roosts, funding the creation of training and resource materials for biologists and land managers and developing directives for conducting species inventories.

“Fred Stabler played a key role in establishing the Bureau of Land Management partnership with BCI that initiated the North American Bats and Mines Project,” said Merlin Tuttle, BCI’s founder and executive director. “{Since 1993, this project has protected literally millions of bats in hundreds of mines that are now managed as permanent bat sanctuaries.”

In 1994, Stabler strengthened his partnership with BCI after attending one of BCI’s Bat Conservation and Management workshops in Pennsylvania. “I was impressed with Merlin’s lecture on how BCI works with partners,” said Stabler. “BCI has earned the success it’s had by working with people the right way. I don’t know of any other conservation organization that can go to industry and get such good cooperation.”

As Stabler worked with other researchers and conservationists throughout North America, he recognized the need for a unified vision within the bat community. “Fred was among the first to suggest and facilitate the North American Bat Conservation Partnership,” said Tuttle.

Stabler admired the success of Partners in Flight, an organization dedicated to continent-wide conservation of migratory birds, and actively promoted a similar initiative for bats. “Partners in Flight had a plan,” said Stabler. “They had regional priorities, something to sell and people to help get the job done. I knew this would be the best way to implement bat conservation programs as well.” Since its inception in 1998, members of the North American Bat Conservation Partnership have worked together to develop a strategic plan that includes continent-wide priorities and regional plans. “We haven’t had many miles in the saddle,” said Stabler, “but I think we’re succeeding.” Stabler’s latest effort is helping establish a permanent, federal bat coordinator position for federal land management agencies.

While Stabler said he was proud to receive the award, he was modest about his accomplishments. He also credited his wife, Johnnye, for her support both personally and professionally. “A lot of it has been being in the right place at the right time,” he said. “And it’s been fun. Still, the bats I like the best are the ones buzzing around my head when I’m fly fishing in the evening.” 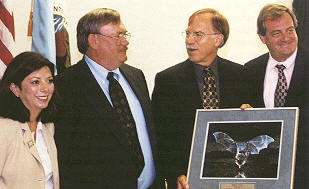