Pat’s presentation, given in Spanish, addressed the need for more effective and better targeted vampire bat control that does not harm other species essential to the health of tropical ecosystems. Throughout Latin America, bats vital to rain forest maintenance are often the victims of vampire control since vampires are seldom distinguished from other species [BATS, Spring 1991]. With growing numbers of cattle in Latin America, vampire bats have proliferated in some areas, often resulting in economic losses for ranchers.

One hundred sixty participants attended, representing 12 countries throughout Central and South America. They included representatives from ministries of agriculture, agriculture universities, and cattlemen’s organizations. At the conference, Pat participated in a special workshop to develop an education and training strategy detailing significant issues in achieving a balance between natural resources and animal agriculture.

Attending such conferences is vital to making key contacts for future collaboration on the development of vampire bat control education materials and to identify institutions in which curricula can be included to address the problems. 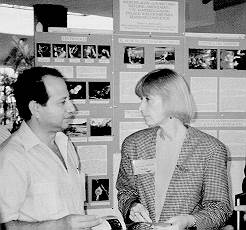