A Michigan mine was scheduled for closure until a group of intrepid explorers found a million hibernating bats and sounded the alarm . . .

W hen Steve Smith roped into a 300-foot deep vertical mine shaft last Thanksgiving, his sole interest was adventure. He had invited two friends to explore the late 19th century historic site with him, knowing that it would soon be filled with tons of earth. Iron Mountain, a small town in upper Michigan, hoped finally to rid itself of what had long been a hazard. No one, not even local conservationists, had considered the possibility that the mine might be one of America’s most important wildlife sites.

To prove that they had actually reached the bottom of the dangerous mine, Steve carried a camera and video recorder. In the hours ahead, however, he would document something even more amazing and unexpected–one of the world’s largest populations of hibernating bats. Chamber after chamber revealed walls covered with bats. The sight of so many sleeping animals and knowledge of their certain doom haunted Steve for days after the trip, and he tried to figure out if there was anything he could do. Then he remembered Bat Conservation International, having saved a catalogue he had received several years before.

On December 6, 1992, he called BCI to voice his concern, still not fully aware of the magnitude of his discovery. When I questioned him about the dimensions of the mine and how large the areas covered by bats were, his response suggested to me that there were far more animals than even he realized. Overnight, Steve rushed the video tape, still photographs, and a rough map of the mine for my examination. Based on his map of mine dimensions, the photographs, and reports of the approximate area covered by hibernating bats, I estimated approximately a million bats.

I contacted the Michigan Department of Natural Resources, explaining that one of the world’s largest known bat hibernation populations had been discovered near Iron Mountain and was possibly in immediate danger. Within hours, state biologist Bob Doepker went into action. His superiors were amazed to hear of such a find in an area that had recently been surveyed for sites of biological importance. How could something so significant have been missed? they wondered. The answer was simple. As bats have lost traditional overwintering sites, they have moved into old mines, often those that have deep vertical pits or dangerous obstacles, and are therefore unvisited by people.

Until recently, such sites have been safe havens for hibernating bats. Through federal and state reclamation efforts, however, many hundreds of abandoned mines are now sealed each year, typically with no consideration of their possible importance to bats [BATS, Fall 1991]. Iron Mountain’s mine inspector, Frank Santini, reported a dozen mine closures in his small area alone over the past several years. Some, he recalls from boyhood exploration, contained large numbers of bats, though we will never know how many, since they are now buried.

Both Steve Smith and Bob Doepker were skeptical that Iron Mountain’s residents would care about saving an old mine for bats. After all, weren’t most people still scared of bats? When I offered a public lecture and personal meetings with local officials, they wondered if anyone would even be interested enough to listen. Recognizing that community support would be important, however, Bob arranged meetings with local officials, the media, and the public. BCI research associate Donna Hensley and I flew up to Iron Mountain to help.

We began with a tour of local schools, where children were thrilled to meet Zoie, BCI’s newest flying fox mascot, and learn why bats are important. Our school visits became the day’s top media event on the local evening news. The next evening, the students’ parents attended my lecture. Despite the snowy, sub-zero weather, the Iron Mountain Library was crowded. The 50 chairs they had set up in anticipation of a low turnout filled quickly, and more than 200 people had to stand. Most stayed for another hour of questions after a 45-minute slide lecture. By the end of the evening, the residents’ feelings about saving Iron Mountain’s newly discovered bat site were no longer in question.

On the following day, members of the National Speleological Society and wildlife biologists representing both Michigan and Wisconsin participated in a field training trip to learn more about conserving bats in mines. We visited a nearby mine where Steve Smith had seen large numbers of hibernating bats years earlier. What we found illustrates the urgent plight of bats that hibernate in caves and abandoned mines.

The mine was not very dangerous, providing a tempting site for local teenagers to explore. Having found hibernating bats less than a hundred yards inside, the youths had repeatedly returned to burn the bats sleeping helplessly on the walls. The floor was littered with recently killed and dying bats and empty hair spray cans, which had been lit and used as torches. Nearly 70,000 bats remained alive, only a fraction of the number that Steve had observed there just three years earlier.

It was easy to see why bats had retreated in such large numbers into mines with dangerous or deep pit entrances, such as the mine Steve Smith and his friends descended into. The newly discovered bats were not again disturbed, since the trip into their roosting area was lengthy and that, on top of the previous disturbance, could have caused heavy mortality. In any case, Steve’s thorough report was adequate confirmation of their numbers.

Hard-rock mines in the northern United States and in much of Canada are especially attractive as bat hibernation sites, because their dominant internal temperatures often range between 40 and 48 degrees Fahrenheit–exactly what many bats need. Bats in these areas typically hibernate for at least six or more months and could not survive for so long without ideal conditions. Because northern mines offer exactly the right stable temperatures, bats using them need not wake up and move as often, thus using their fat reserves more slowly.

Today, bats from many thousands of square miles around congregate each fall in abandoned mines, especially in upper Michigan, the northern half of Wisconsin, and much of Canada. Some still undiscovered populations in these areas are likely even larger than the one at Iron Mountain, with individual mines potentially containing multimillions. The Iron Mountain mine may contain far more bats than were discovered, since it continues for an unknown distance past the point of Steve Smith’s exploration. Within the last decade, I personally have checked only two additional mines in Wisconsin and Michigan. These contained a total of at least 600,000 bats of four species, and both would have been closed without consideration of bats had they not come to the attention of fellow biologist Elmer Birney and me.

In Iron Mountain, both the deep mine where Steve Smith discovered more than a million bats, and the other where some 70,000 remain, are now in the process of being fitted with protective gates that will allow the bats to come and go, but prevent people from entering. The Michigan Department of Natural Resources now plans to hire Steve to assess other abandoned mines throughout northern Michigan. The region is only one of many throughout the United States where old mines dot the countryside and where bats may be in danger.

It is sobering to realize that even larger populations than the one just discovered in Iron Mountain may already have been lost or could be gone within a very short time. Bats living in abandoned mines throughout much of the United States and Canada are now at extreme risk, as state and federal reclamation projects prepare for the most massive clean-up and safety closure efforts in history. Reclamation, especially the removal of hazardous wastes and protection of dangerous sites, should be applauded, but the necessity of careful biological evaluation prior to closure of hard-rock mines must be emphasized.

Bats like the little brown bat (Myotis lucifugus), which rank among America’s most abundant species and commonly hibernate in abandoned mines, could literally become endangered as a result of careless mine closures. From an ecological or economic perspective, these relatively abundant bats may in fact be the most important to save. The Iron Mountain mine was populated predominantly by little brown and big brown (Eptesicus fuscus) bats, some of America’s most abundant and valuable kinds. Such bats play an essential role in the balance of nature as the primary predators of insects that fly at night, not to mention the good they do in consuming vast quantities of pests [BATS, Spring 1993].

Some 40 percent of U.S. bat species are federally listed as endangered or are official candidates for such status. Yet, by the time a species is listed, it typically has declined to a point where it no longer can perform its ecological role. We simply cannot afford to ignore the fact that all bats that live in mines, whether endangered or not, are important.

The magnitude of the current threat is so great that, without massive and concerted efforts, we may lose a large proportion of America’s bats without even discovering their presence. BCI alone can only do a small portion of the work needed. Individual people can make a big difference; without Steve Smith’s timely call to BCI, more than a million bats might have been lost.

Share your concerns with other conservationists, relevant organizations, and private land owners throughout areas where mines occur. Call or write your state departments of natural resources, as well as other appropriate state and federal agencies, and insist on biological assessment before remaining mines are closed. Where important bat populations are found, “bat friendly” gates must be installed. These are often no more costly than alternative safety measures and can be far less.

If you know of a mine about to be closed, ask if it has been checked by a knowledgeable biologist. If not, appropriate authorities must be informed of potential problems as soon as possible. BCI staff will be happy to assist. As a last resort, sometimes the public consensus generated through media stories can be invaluable [see “Bats, Mines, and Politics,” page 10], though needless conflict should be avoided.

Reform of the General Mining Law of 1872 has been before Congress for the past several years, and two new mining reform bills were introduced early this year. Write your representative or senator and express your concern that the new bills contain a “Wildlife Protection Amendment” stating that “No reclamation of eligible sites under this title will be undertaken until a biological survey is performed at the site during the appropriate season. If biological resources are discovered, appropriate mitigation measures will be initiated in the reclamation activity.” Urge your representative to support H.R.322 and your senator to support S.257, but with the addition of this amendment. Inform them of the importance of abandoned mines to bats. With a new congress, this issue may be decided this summer; your voice is critical. 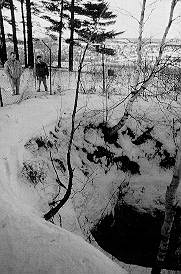 The deep vertical entrance shaft of this Michigan mine was about to be filled with tons of earth until Steve Smith (left) and two friends discovered one of the world’s largest populations of hibernating bats. State biologist Bob Doepker (right) was instrumental in getting the entrance gated this summer. 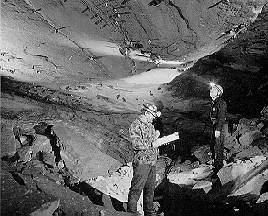 Bob Doepker (left) and Merlin Tuttle survey another mine near Iron Mountain, where only about 70,000 bats remain out of a much larger former population. Access to the mine was easy, and hibernating bats were burned by vandals. The entrance is being fitted with a protective gate this summer. 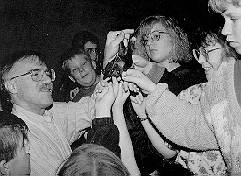 Opposite page: Millions of bats in mines are at risk throughout North America. Reclamation efforts often proceed without biological assessment, and many hundreds of mines are sealed each year. Even bats as abundant as these hibernating little brown bats could rapidly become endangered as a result of careless closures.