EVEN AFTER MANY YEARS of studying a particular bat species, scientists can still make some surprising discoveries. Bat biologist Patricia Brown has banded some 25,000 California leaf-nosed bats (Macrotus californicus) over the past 27 years, with most of her fieldwork conducted in December and June. So in early September, when she and her field associates were called back to a mine roost they had just visited last summer, what they found was completely unexpected.

The bats had been excluded from the roost that June, because the area was slated for renewed mining activity. Brown and her colleagues had placed nets over the entrance and thought their work was done for the season. The banded bats had already successfully relocated to another nearby roost, which was fitted with a protective bat gate. But the mining company called Brown back when they discovered that the net was tom and suspected that the bats may be back at the old roost.

Using night-vision equipment at dusk, the researchers observed bats flying into the mine instead of out. Although a few exited, five times as many entered as left. What was going on? After midnight, the researchers quietly entered the mine and found each of the chambers had been staked out by a single male bat. The males had set up display territories, flapping their wings and calling whenever females cycled through the rooms. If another male entered, the established male chased the newcomer away, sometimes even knocking him out of the air. When a female landed, the male would fly over to her, nuzzle her, and wrap his wings around her; if she accepted him and didn’t fly away, they would copulate. Over a three-day period, the males stayed in the chambers, but very few females remained during the day.

Brown later moved to another mine site about four hours away where no bats had been banded. Once again, males flew into the mine at dusk, before foraging. In this mine, the males spaced themselves out about a yard apart along one wall and began flapping and calling. Within an hour they were followed by flocks of females who flew along the gauntlet of displaying males. As a female passed, the males displayed vigorously. But the females would have none of it; they flew to the back in a separate area. A few females, however, came back down the line toward the males. When a female landed next to a male, he attempted to wrap his wings around her, the next stage in courtship.

This “singles bar” behavior is also found in Africa’s hammer-headed bats (Hypsignathus monstrosus), and is currently known in only one other mammal, the Uganda kob, a grazing antelope. It is also found in a few frogs, fish, insects, and some birds, such as the sage grouse. A group of males establishing and defending a temporary territory (known as a lek), for the sole purpose of attracting mates is an uncommon mating system. A typical hammer-headed bat
lek will consist of anywhere between 30 and 150 males, each attempting to out-display the other. With the oversized head and enormous larynx of the males, they are well-suited for it and have been described by some as a noise box on wings.

The discovery of lek behavior in California leaf-nosed bats was completely new. Scientists do not know if other bat species might also court mates in this manner, but given the difficulty of observing the secret lives of bats combined with the narrow window of opportunity to discover a specific and seasonal behavior, it is little wonder that no one has observed it before. 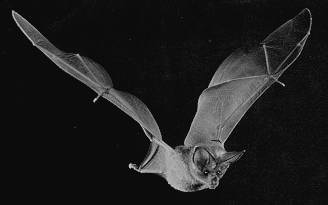 California leaf-nosed bats live in mines and caves of the Southwest and were recently discovered exhibiting an uncommon form of courtship behavior.