Cosmetic trimming of palm fronds threatens some of the unusual habitat of the southern yellow bat . . .

As the sun sets on the Lower Rio Grande Valley along the Texas-Mexico border, warm breezes flow into this tropical enclave from the Gulf of Mexico and caress the palm trees. The gentle sway awakens hundreds of northern and southern yellow bats (Lasiurus intermedius and L. ega) from their daytime slumber among the dense clusters of dead fronds. The color of the bats’ fur, through a neat trick of evolution, exactly matches the faded, dry yellow of the dead palm fronds to which they cling with their sharp hind claws. They yawn and chatter to one another, stretching their thin, leathery wings. Soon they will head out to the river for a quick drink, then soar off over the patchwork of citrus groves and other agricultural fields in pursuit of insects.

Just a couple hundred miles up the coast in Corpus Christi, Texas, a similar scene is unfolding, but with one major difference. Here, rows of artificially planted ornamental palms line Ocean Drive, a scenic stretch of bay-hugging road adorned by huge, multimillion dollar homes. From the mansions’ manicured lawns to the less assuming yards of the sprawling suburbs, frequent clumps of palms dot the landscape. But unlike the palms of the Rio Grande Valley, most of those in Corpus Christi are trimmed regularly to remove the dead fronds. Only where dead fronds remain are bats stirring this evening.

The first time I saw a yellow bat was in an undergraduate biology class at Texas A&M University-Corpus Christi. One of the groundskeepers had found it clinging, appropriately enough, to the outside wall of the science building and had turned it over to our professor, who brought it to class in a cage. I was delighted to be able to scrutinize what was to me an animal as exotic as any of the African favorites we were studying–with plush, yellow fur and impossibly thin wing membranes. This encounter made me realize that you didn’t have to travel to Africa or the Amazon basin to see wonders of nature; there were plenty right here at home. And if I, who had been exploring nature all my life, didn’t know about the bats in my own backyard, how many more people must be unaware of these natural treasures?

So it was that I decided to study bats for my Master’s thesis at Texas A&M University-Kingsville. The southern yellow bat, which is listed by the Texas Parks and Wildlife Department as threatened in the state, was a good candidate for study, as little is known about its habitat needs and population dynamics within its limited North American range. The northern yellow bat would be included in my study as well because the two species roost in the same areas and can only be distinguished on the basis of wing measurements.

My first task was to conduct a comprehensive literature search that I hoped would render me something of a yellow bat expert. To find out about permits for handling bats, I contacted Peggy Horner, an endangered species biologist at Texas Parks and Wildlife who loves bats and would later become my boss, mentor, and friend. I was surprised to learn from her that there was an international bat conservation organization right here in Texas. I immediately became a BCI member after viewing the “Secret World of Bats” video.

Through my research, I found out that although Texas has 32 of the 45 North American bat species, very little research has been done on bats in South Texas. The first Texas specimens of the southern yellow bat were recorded at the Sabal Palm Grove in the late sixties. In a thesis on the distribution of South Texas bats, Sandra Chapman of Texas A&M-Corpus Christi documented the first occurrence of a southern yellow bat north of the Rio Grande Valley and proposed that the species may be expanding its range due to the increased use of ornamental palms. The more common northern yellow bat may also roost extensively in Spanish moss within its range, much like the Seminole bat (Lasiurus seminolus). The southern yellow bat, however, seems to prefer the dead palm fronds of Texas sabal palms (Sabal texana), ornamentals such as the Washington fan palm (Washingtonia robusta), or even banana trees (Musa spp.) which grow in some yards in South Texas.

On learning that yellow bats use dead palm fronds extensively for roosting, one of my immediate concerns was the practice of trimming dead fronds from palms–a big industry in South Texas. When the trees are trimmed, usually by gardening or tree firms, all dead fronds and many of the lower living fronds are removed, leaving them looking much like hors d’oeuvre toothpicks with a tassel on the end. Even my own university trimmed the fronds at much expense and in spite of continued objection by many prominent faculty members. The only “practical” reason given for trimming, other than looks, is that administrators everywhere are fearful of a potential lawsuit should a palm frond fall on someone’s head.

Further investigation revealed that many species of animals use the fronds as year-round habitat. These animals include birds such as Great Kiskadees and the Hooded and Altamira Orioles; squirrels; lizards; and even other bats such as evening bats (Nycticeius humeralis) or the occasional Seminole or pipistrelle (Pipistrellus subflavus). I wondered what risk trimming would pose to these animals, especially to bats during the spring maternity season when pups are not yet able to fly.

Several houses in my neighborhood had rather large clumps of untrimmed palm trees in their yards. I had never really noticed any bats, but maybe I hadn’t looked closely enough. Taking my bat detector out in the evening, I walked up and down the streets in my neighborhood, listening. What I found astounded me. The air was filled with the metallic pinging and buzzing of feeding bats. There must have been hundreds up there, especially around the streetlights and in front of the homes with lots of untrimmed palm trees. Every now and then, I would actually see a yellow bat or two swoop down into my range of vision, but most went undetected except for their calls. I had never thought there would be so many bats in an urban setting.

I went door to door asking homeowners if they had noticed any bats in their trees. Indeed they had, and in most cases the bats had been there for several years. One woman had stopped trimming her palms the day bat pups were found still clinging to the trimmed fronds. Not only did she feel sorry for the baby bats, but she had heard that bats eat insects, and she wanted to encourage their presence as pest control allies.

I found out that most of the tree companies knew that bats were using the palms, and they knew enough about the animals’ life cycle to recommend not trimming the trees in spring before the baby bats can fly. However, not all tree companies are so conscientious about wildlife. Peggy Horner received a call from one distraught worker who had been part of a contract crew trimming palm trees. The employee said they had found hundreds of baby bats in the fronds they had already cut from the trees. When they asked the crew leader what to do, he told them to go ahead and feed the fronds into the shredder, bat pups and all. This they grudgingly did, as the mother bats swooped frantically overhead.

Obviously some education was needed. I decided to put together a bat program for children with slides, the BCI “Very Elementary Bats” video, a bat house, and a recording of bat echolocation calls. Often I would bring live Mexican free-tailed bats, which we had been catching on the Texas A&M-Kingsville campus for a population banding study. At my first talk at a museum, I was immediately besieged by elementary school teachers who wanted me to come to their classes. I ended up giving dozens of talks at various schools and organizations. Everywhere I went people were eager for bat information.

Very few people responded to the bats with the traditional repulsion or fear. Those who did seemed to change somewhat after seeing how small and non-threatening they were and learning about the many benefits of bats. Most people had no idea that bats were likely to be living in palm trees in their very own yards or flying overhead eating insects in their own neighborhoods. The children made wide-eyed promises to look more closely for yellow bats at their homes in the evenings, and several adults promised to stop trimming their palms.

The staff at the Corpus Christi Botanical Gardens were extremely interested in the local bat fauna. I wrote an article on South Texas bats for their quarterly magazine, gave a talk at one of their meetings, and suggested ways they could do more for bat conservation in an area of Texas where so many people obviously want to learn about and help bats.

Although I am still doing a thesis on bats (that’s another article), lack of funding kept me from completing the much-needed research on palm-tree roosting yellow bats in South Texas. It is my hope that more study will be undertaken someday and that yellow bat populations can be encouraged in urban areas through education and conservation. After all, untrimmed palm trees are like built-in bat houses requiring no time or money. The citizens of South Texas have ample reason to appreciate the value of their natural resources: the region boasts an extremely rich and diverse bird fauna, and ecotourism is bringing in substantial revenue. Perhaps South Texans will come to see that the equally fascinating bats of the area could also contribute to ecotourism, and more people will learn to take pride in the added splendor of palm trees as the habitat of the beautiful yellow bat.

Katy-Marie Mirowsky is currently in California researching Spotted Owls for Humboldt State University. She just finished an internship at Texas Parks and Wildlife Department and completed her thesis on two rare Texas bat species (a research project supported in part by BCI). 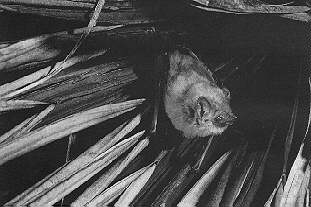 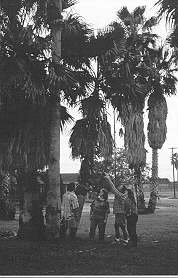 Corpus Christi homeowners John and Elly Nisayas show the author their front yard “bat sanctuary.” The Nisayases have observed bats, including babies, in their untrimmed palm fronds for years. 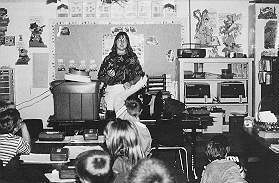 The author teaches second- and third-grade students about bats in Corpus Christi, where she found many members of the community were happy to learn about their local bats.