Many readers have requested an update on the chiroptorium project described in the Winter 1997 BATS ("How to Build a Cave: A Bold Experiment in Artificial Habitat”).* Texas proprietor David Bamberger reports that although he had only fleeting bat visitors this past summer, several came to roost in early autumn. Bamberger had left the cave uncovered throughout the summer, in part to test the effects on internal temperatures, which proved to fluctuate too much. Sometimes the thermostat rose as high as 121°F.

After the chiroptorium was covered with soil in early August, however, the temperature decreased more than 30 degrees and then stabilized at about 88°, despite outside temperatures still in the 90s. By mid October, 15 cave myotis (Myotis velifer) and one Mexican free-tailed bat (Tadarida brasiliensis) had moved in.

In late autumn, the soil over the chiroptorium was sprigged with native grasses. It will soon blend into its surroundings and become the perfect home for free-tailed bats to discover during their spring migration back to Texas.

* You can find this article in the BATS magazine archives on the BCI web site at: http://www.batcon.org/batsmag/batindex.html 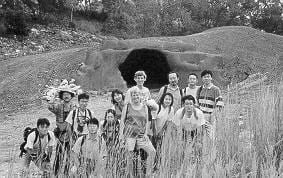 BCI biologist Brian Keeley and visiting bat conservationists from Japan joined Margaret Bamberger last September on a tour of the chiroptorium. At that time, the 3,000-square-foot artificial cave had just been covered with soil.