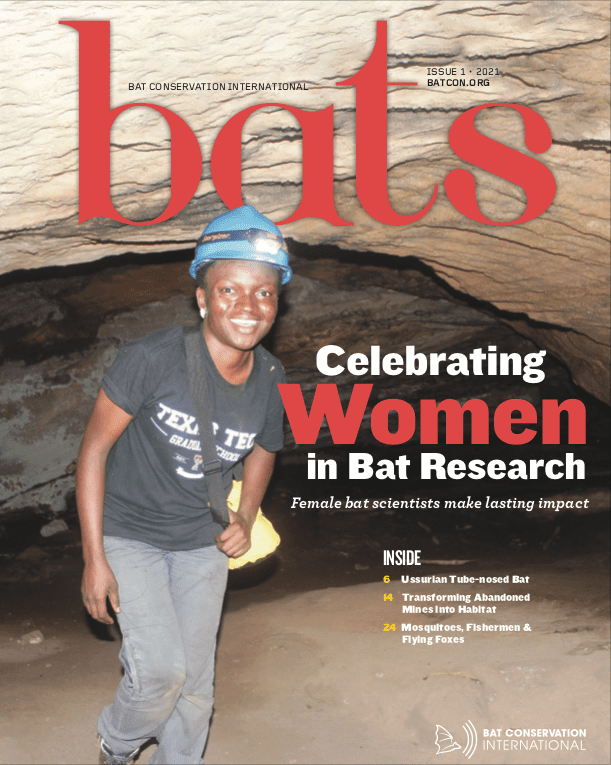 March is Women’s History Month in the United States, so it’s the perfect opportunity to celebrate women around the world who work with bats. From Malaysia to Costa Rica, Great Britain to Russia, to India and beyond, dedicated female bat researchers are conducting meaningful work to protect the more than 1,400 global bat species. Here, we profile three extraordinary women—from Nigeria, México, and Ireland—who are making a difference in bat conservation.

There are more than 200 species of agave—the sharp, spiky plant known for its use in tequila and mezcal—in the world. This species diversity is a good thing, according to Dr. Emma Patricia Gómez-Ruiz, who is an expert on agave plants and the nectar-drinking bats that pollinate the plants.

“Without agave blooms, bat populations cannot be sustained,” Dr. Gómez-Ruiz says. “And without bats pollinating agave, the plants are eventually lost.” One of several reasons why agave is important is that these plants have extensive root systems, which help stabilize soil.

The bats Dr. Gómez-Ruiz champions are sparrow-size and curious-looking, with short ears, elongated snouts, and long thin tongues that can dart quickly into agave blooms. As they slurp the agave nectar and eat pollen, they also collect grains of pollen on their fur, wings, and faces. The pollen can sometimes cover them completely, making them appear yellow all over.

In 1988, both the Mexican long-nosed bat and the Lesser Long-nosed Bat (Leptonycteris yerbabuenae) were added to the U.S. list of endangered species, due to the cumulative result of habitat destruction, cattle grazing, mining, killings motivated by human fear, and the unbridled collection of agave to produce liquor. Today, the Lesser Long-nosed Bat is a recovery story with a healthy population of more than 200,000 animals. But numbers of Mexican Long-nosed Bats continue to decline.

As Dr. Gómez-Ruiz was working on her doctorate and creating an important database on nectar bats and corridors, she was recognized with top global honors for her work, including the Global Biodiversity Information Facility’s Young Researcher’s Award in 2013, followed by the North American Pollinator Protection Campaign’s Pollinator Advocate Award in 2015. Since then, she has collected more awards, compiled additional data, and taken part in framing conservation agreements between the U.S. and México.

Her recent work has focused on identifying key foraging and roosting sites in the Mexican states of Coahuila and Nuevo Leon. In 2021, Dr. Gómez-Ruiz will publish new data, which will be used to help make land-planning decisions.

“The success of migratory routes depends on a number of conditions, including ever-revolving cycles of agave blooms,” she says. “The diversity and maturity of agave species along nectar corridors matters. Agaves bloom every eight to 20 years, and then the plant dies in what is considered a suicidal event. Bats serve an absolutely critical role in dispersing pollen from the blooming agaves—which are in the throes of dying, to keep growth cycles going.”

To complete her doctoral work on the relationship between bats and mountain elevations, Iroro Tanshi spends time traipsing through moist broadleaf forests in the lowlands of Nigeria, and then climbing to cloud-covered mountain summits, speckled with stunted trees, in the southeastern part of the African country.

Nigerian-born Tanshi faces steep professional challenges. An estimated 30% of Nigerians depend on the country’s agriculture for their livelihood, and many traditional farming practices threaten the country’s 100-plus bat species. Plus, she’s a female scientist in a country where women’s rights have faced challenges. Tanshi is on a mission to establish new bat-protecting farming methods and demonstrate that women have the scientific chops and leadership to direct important conservation programs.

Tanshi has been featured on CNN International’s “Inside Africa,” awarded a grant from Bat Conservation International, and last year, she was one of three recipients to receive prestigious honors and a sizable grant from Future for Nature, an international organization that recognizes conservation achievement.

“Mountains are fascinating, with a long history of inspiring explorers and biologists for centuries,” Tanshi says. “To that, the highlands along the border of Nigeria and Cameroon is one of the most species-rich places on the African continent. We don’t yet know all we expect to find. But what we can say is that the forest is shrinking and increasingly fragmented due to human development and requiring immediate action.”

In 2016, Tanshi rediscovered a small population of Short-tailed Roundleaf Bats (Hipposideros curtus) in the Afi Mountain Wildlife Sanctuary and Cross River National Park, an area that is Nigeria’s last primary forest and known for being Africa’s oldest forest. The bats—listed as endangered by the International Union for the Conservation of Nature—had been discovered in 1921, but had not been seen or recorded in the wild for 45 years. The discovery of 12 of the bats, Tanshi says, “was beyond thrilling, beyond words.”

Weeks later, Tanshi was horrified to watch an out-of-control wildfire threaten the forest habitat where she rediscovered the species. The fire burned for nearly three weeks and was the biggest event in over a decade at the wildlife sanctuary. It further ignited Tanshi’s passion. “Nigeria has a fire-managed agriculture, which, if uncontrolled, poses grave problems for bats and other species,” she says.

“Local farmers often set fires on their farms to control the brush,” she continues. “They leave their fields fallow for two to three months to restore the soil’s fertility and the weeds grow tall. Using a machete becomes labor intensive, so they set fires, which sometimes get out of control. They also set fires on the edges of a forest to add more farming land.” Typically, the fires are set during the tinder-dry season, December through April.

In addition to her growing database of Nigerian bat species, Tanshi established a small nonprofit and then set up the “Zero Wildfire Campaign” to engage communities and farmers with protecting critical bat habitat. In 2019, true to its name, there were zero reported wildfires and only one small incident in 2020. Tanshi expects the program will continue to be successful.

“Setting fires has been a cultural tradition, so we couldn’t just tell people to stop,” Tanshi says. “We needed to invest in knowing the people we speak with. We needed to get them engaged. Addressing habitat destruction starts with identifying human behaviors and providing alternative solutions.”

Eight years ago, Dr. Emma Teeling stood before 2,000 people at the Grand Canal Theatre in Ireland’s Dublin Docklands to deliver a “TEDx” talk about the evolutionary characteristics of bats. She shocked and enthralled the audience with her statement: “The secret to everlasting youth lies deep within the DNA of bats.”

Her assertion, which she acknowledges as provocative, is what she is best known for and something she fervently believes. Over more than a decade, Dr. Teeling and partnering scientists have made studying the longevity of bats their mission.

Taking into account body size, which is correlated with longevity in lots of animals, 19 mammal species are known to have longer lifespans than humans. Of those 19 mammal species, 18 are bats. “The first question we must ask is why do bats have extended life spans?” Dr. Teeling says. “The second question is how does this apply to humans and other species?”

Born in Dublin, Dr. Teeling lives within a stone’s throw of the birthplace of Bram Stoker, author of the 1897 Gothic novel “Dracula,” which is oft-faulted for demonizing bats. Dr. Teeling notes the irony. Her work with bats originally started in the lab studying tissue samples and later expanded to field work.

Every summer, Dr. Teeling and a small group of researchers travel to the picturesque village of La Vraie Croix in the Brittany region of France. Their goal is to maintain meticulous records about Greater Mouse-eared Bats (Myotis myotis) which, notably, have a maximum lifespan of 37 years despite weighing about the same as a lab mouse. La Vraie Croix was chosen because the studied bats return year after year to roost.

Inside the roosts, Dr. Teeling and her team carefully catch the bats and gently stretch their wings. A flashlight underneath their wings helps identify the pups because the cartilage at the joints on their fingers has not yet fused. Beyond this method, the age of bats cannot be visually determined, so it’s important to microchip the pups for future identification and draw microscopic amounts of blood from each bat to sequence important genomic information.

“Of all living mammals, bats are extraordinary given their unique and peculiar adaptations,” Dr. Teeling says. “Studying their longevity is certain to help us better understand aging processes in all mammals.”

What is one of the most interesting facts about bats?

“Bats fly astonishing distances to migrate, some as far as 750 to 1,000 miles. Some fly pregnant and some fly with a nursing newborn attached to her teats.”

“The unique facial features of each bat species reveal their sophisticated evolution. The shape of their ears show how they use echolocation. Their skull structures and teeth are indicators of how they’ve evolved to their diets.”

“Several bat species live 30 or more years. Some wild bats—Brandt’s Bat (Myotis brandtii) for example—have been found to live more than 41 years, which is extraordinary given their small body size.”