Lois Blumenthal, a conservationist who established the Bat Conservation Programme for The National Trust for the Cayman Islands, sent a follow-up to the Cayman’s story that appeared in our last issue. She reports the Cayman Islands’ prison woodshop is building bat houses, and volunteers are helping paint and install them on donated utility poles. Utility poles are ideal for Cayman bat houses because they are strong enough to withstand high winds and tall enough to be attractive to the bats. Contributions of these poles by Caribbean Utility Co. Ltd. have been crucial to the success of the program.

In addition, local exterminators who previously helped islanders deal with bat problems by killing bats are now are helping coordinate installation of bat houses as alternative roosts. They are using approved methods for excluding bats, and no longer exclude them during summer when young are present.

“Residents who have installed bat houses in their gardens also report that they have fewer mosquitoes,” said Blumenthal. “We believe the echolocation sounds made by the bats may signal mosquitoes to avoid the immediate area; however, a study is being carried out by the Cayman Islands’ Mosquito Research & Control Unit to see if the facts support this hypothesis.”

Over the years, the National Trust for the Cayman Islands has accumulated a large body of information on Caribbean bats and their conservation. “They are very interested in sharing what they have learned with other islands that may have the same species and problems,” says Blumenthal. “The director of the program is willing to visit other islands to help launch bat conservation projects and has also developed a number of information sheets for the public as well as a study guide for schools that could be adapted elsewhere.”

E-mail the bat conservation director at ntrust@candw.ky or blu@candw.ky for copies of the materials developed for the public and more detailed descriptions of the various aspects of the program. Visit the National Trust for the Cayman Islands Web site at www.caymannationaltrust.org for more about Cayman Islands’ bats. 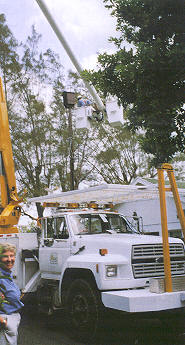 Suzanne Smith, wife of the governor of the Cayman Islands, watches as the Caribbean Utility Company installs bat houses in the gardens of the governor’s house on Grand Cayman.