Bracken Cave in central Texas is summer home to some 20 million Mexican free-tailed bats (Tadarida brasiliensis). Located less than 20 miles from downtown San Antonio, the cave has come under increasing threat of urbanization. This June, after several years of negotiations and the assistance of many, Bat Conservation International succeeded in completing the purchase of this critical site with funds granted by the Ewing Halsell Foundation. Until a comprehensive management plan is completed, visitation to the cave is strictly limited.

The bats of Bracken Cave comprise the largest known bat maternity colony in the world, producing millions of young each year. In March and April, expectant females return to Bracken after overwintering in Mexico. Most males roost elsewhere in smaller groups. In the latter part of June, females give birth to a single pup, nearly doubling the cave’s population.

As the bats give birth, cave walls become densely packed with naked pups, clustering tightly at up to 500 per square foot. Babies roost separately from their mothers. Before leaving her infant in the nursery with the other pups, each mother spends up to an hour getting acquainted with her baby’s scent and vocalizations. When she returns, she accomplishes a remarkable feat: she finds her own young among the millions of others vocalizing and straining for attention. She nurses her baby at least twice a day.

After four to five weeks, youngsters begin learning to fly under the most difficult of conditions. If all goes well on its first flight, a young bat drops into complete darkness, flies at a speed of at least 20 feet per second, and turns an almost complete somersault with millimeter precision to land on the cave wall just seconds after taking off. It must also avoid several collisions a second with thousands of other young fliers testing their skills, while at the same time relying on a sonar system that is itself being tested for the first time.

Collisions with other bats or cave walls can be fatal. An emergency landing is certain death; the floor is teaming with millions of carnivorous dermestid beetles that can reduce a young bat to a cleaned skeleton within a few minutes. Fatalities are high, and at least half won’t survive their first year. Between the perils of the first few weeks of life combined with mortality during migration, the population of Bracken Cave remains relatively stable in the absence of human disturbance.

By late July, young bats are ready to test their flight skills outside the cave, joining their mothers to feed on insects. Although they are weaned soon after, their initial energy demands are high, forcing nursing mothers to consume more than their body weight in insects each night. To find sufficient food, the bats often emerge up to three hours before sundown, creating one of the most spectacular sights in all nature, an event spanning several hours.

At first only a few circle the cave entrance, signaling that the emergence is about to begin. They are soon joined by multitudes, swirling clockwise to gain altitude in a spectacle often likened to a living tornado funnel. The soft sound of thousands of beating wings fills the air and cools the hot summer evening. As the bats rise above the mouth of the cave, they form massive, undulating columns that can be seen for miles. Flocks may climb to nearly 10,000 feet, apparently catching tail winds to speed them to distant feeding grounds. Each night these bats cover thousands of square miles over surrounding towns and farms, consuming some 20 tons of insects.

Sometime in fall, usually with the first major cold front to arrive in central Texas, the massive colony of Bracken Cave migrates south into Mexico where the bats will spend the winter, remaining active. Free-tails are among the few North American species that do not hibernate. With their long, narrow wings, these bats are especially adapted to fast flight and are capable of long migrations, sometimes as much as 1,100 miles. Catching high tail winds, they may attain speeds up to 60 miles an hour.

In Mexico, Bracken’s bats and the millions of others that join them from throughout the Southwest are increasingly vulnerable. Recent surveys conducted by BCI and Mexican biologists revealed that half of the caves surveyed had declined by more than 95 percent [BATS, Summer 1991]. Mexican farmers, believing that they are killing vampire bats, burn tires or other debris in cave entrances, killing millions of bats.

Efforts are underway to ensure safety of these bats that migrate between our borders. One of the first steps is education. BCI’s recently completed Spanish-language audiovisual program, “Los Murcielagos de America Latina,” is being distributed to learning centers throughout Latin America. In addition, BCI has produced a Spanish-language brochure describing the difference between beneficial bats and vampires, and describing methods to control them without harm to other bats (see related article, page 18).

Mexican free-tailed bats are still among the most abundant of our Southwestern species, but even they have declined in many places where they formerly were common [BATS, September 1986]. We must work hard to prevent them from joining the nearly 40 percent of American bat species either on the endangered list or proposed for it.

The bats of Bracken Cave are a national resource to treasure, and BCI is very proud of this ambitious acquisition. With good stewardship, we can ensure that it will be protected now and far into the future. 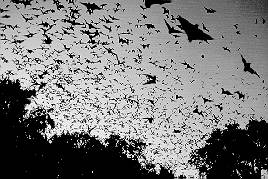 Above: The emergence of millions of bats from Bracken Cave is one of nature’s most spectacular sights.

The Bracken Cave bat colony covers thousands of square miles over surrounding towns and farmland, consuming up to a half million pounds of insects in a single summer night.