In a historic move for bats, the Bureau of Land Management (BLM) signed a Memorandum of Understanding on March 22 of this year with Bat Conservation International. The purpose of the agreement is to enhance the conservation and management of bats on the 270 million acres of public lands administered by the BLM and to protect habitat and related resources. Many of these lands contain abandoned mines used extensively by bats.

The agreement between BCI and the BLM was facilitated by the hard work of BCI member and bat researcher Dr. Patricia Brown [see “Bats and Mines: Finding Solutions,” page 12], who played a lead role in helping to draft the memorandum and in arranging key meetings. She and Merlin Tuttle flew to Washington, D.C., for the signing ceremony. The BLM and BCI will actively cooperate on habitat management projects to maintain and conserve healthy bat populations and their critical habitats through censusing and monitoring and through educating the public about the vital roles of bats in ecosystems on BLM lands.

The BLM is proceeding quickly to initiate several projects. It already is drafting a directive that abandoned mines on public lands be checked for bats prior to closure and that critical bat sites be protected. In addition, BCI educational materials are being incorporated into BLM management and wildlife training programs. In August, BLM representatives will meet in Austin with BCI staff to plan strategy and investigate additional needs of bats on BLM lands. The emphasis will be on designing a cooperative approach to solving problems. Other priorities include development of a bat conservation training film for resource managers and a color brochure for the public. The BLM has also expressed an interest in erecting bat houses and providing roosts for bats beneath bridges as part of its Watchable Wildlife Program.

BLM lands sustain an abundance and diversity of fish and wildlife resources and are the permanent or seasonal habitats for over 3,000 species of mammals, birds, reptiles, fish, and amphibians. The new agreement with BCI is part of the BLM’s Fish and Wildlife 2000, a comprehensive blueprint for its management responsibility during this decade, and a foundation for the stewardship of biological resources into the 21st century.

Through this blueprint, the BLM is progressing in the recovery of federally listed species and is integrating ecosystem management concepts into its renewable and nonrenewable resource programs. This plan has also enabled the BLM to make the unprecedented move to form partnerships with private-sector organizations like BCI. With the many mines scheduled for reclamation on lands under BLM jurisdiction, the partnership also spells especially timely hope for protection of important bat populations still to be discovered. 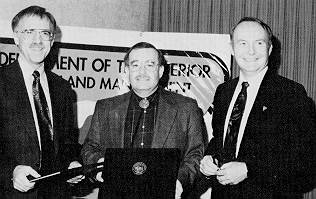 The Bureau of Land Management recently signed an agreement with BCI, which will mean a better future for bats and their habitat on public lands. From left to right, Merlin Tuttle, BLM Director Jim Baca, and Mike Penfold, Assistant Director for Land and Renewable Resources.