Unlike other tours to Costa Rica, BCI’s trips provide the rare opportunity to enjoy bats up–close and to learn first-hand about the fascinating bat/plant interactions in tropical ecosystems. Participants in this year’s trip saw 24 of Costa Rica’s more than 100 bat species.

Led by Dr. Richard LaVal, a local naturalist and bat specialist, we began at Monteverde in the cool, moist cloud forests of central Costa Rica. Daytime hikes revealed a multitude of plants and animals, but it was the night that captivated bat lovers.

Verdant jungle trails became alive with myriad sounds of the night and heady aromas of night-blooming plants. Inconspicuous vines were transformed into chandeliers of Macuna flowers that would entice bats not only to a sweet treat of nectar, but also to our nearby mist nets. Several nectar- and fruit-eating species were caught and released, along with our first vampire bat.

From Monteverde we wound down to the dry Pacific Coast where we spotted macaws along forest trails and caught glimpses of huge iguanas and howler and white-faced monkeys. At night we were all fascinated by a frog-eating bat and the delicate proboscis bat (Rynchonycteris naso). These insectivorous bats, hardly larger than bumblebees, were the group favorites with their big eyes and upturned noses. Tufts of lightly colored fur dotting their forearms, combined with white stripes on their backs, gave them the perfect camouflage against the bark of their favorite roosting trees.

Our next stop was on the Caribbean coast at Tortuguero, where green sea turtles nest. We spent days exploring the rivers by boat and observing the abundant wildlife with help from our guides who pointed out the often cryptic animals and birds. The calls of howler monkeys rang through the morning air, and we spotted two sloths making their way slowly through overhanging trees.

At night we listened with a bat detector to the many different calls of echolocating bats as they foraged for insects along the jungle waterways and trails. Our nets helped us to observe a variety of insectivorous and fruit-eating bats, including a great fruit-eating bat with its handsomely stripped face.*

The trip was richly rewarding for the 20 participants. For those of you who missed this unforgettable tour, we’ll be taking another group to Costa Rica in April 1993.
–Janet Debelak, Education Assistant

[footnote 1]
* seen on this issue’s cover 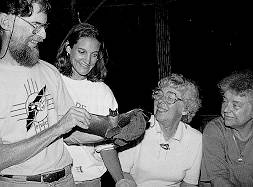