Bat conservation in Latin America relies heavily on successful education initiatives and the availability of educational materials about bats. Throughout Latin America, fear of vampire bats leads to the annual destruction of millions of beneficial bats, many of them Mexican free-tailed bats (Tadarida brasiliensis) from the U.S. that spend the winter in northern Mexico.

With the help of Mexican biologist Arnulfo Moreno, BCI completed a pilot study in 1991, revealing that half of the ten bat overwintering caves surveyed had lost 95-100 percent of their bats [BATS, Summer 1991]. The most frequent cause of decline was burning of cave roosts. Most of the sites are mined to use fresh guano for fertilizer or to obtain phosphate from old deposits. Since the miners do not want to work with bats in the cave, they set fires in the entrances, killing huge numbers of bats at a time. In other cases, caves are burned or dynamited in attempts to kill vampire bats. Throughout Latin America, ranchers lose an estimated $50-100 million each year to vampire-related livestock deaths.

These results revealed the critical need for conservation education in the communities near the caves most affected. Highlighting this urgency, one of the most sensitive caves identified in the 1991 study has since lost all of its bats, a colony of some 250,000 free-tails. While it may be too late for some bat populations, others can still recover. With a grant from The Brown Foundation, an intensive and highly successful education campaign was mounted earlier this year. Moreno, who teaches biology at a local college, visited 58 educational and government institutions in four cities in northern Mexico, reaching many thousands of people, including key decision makers.

During the campaign, Moreno made good use of BCI’s Spanish-language educational materials, donating 40 videos of “Los Murcielagos de America Latina” to schools and 1,000 BCI-produced brochures on vampire control. Originally planned to be completed in a month, the campaign generated so much interest that it was expanded to four months to accommodate all of the groups that wanted to learn more about their local bats. To continue to reach others, Moreno trained 22 of his students to make presentations on bat conservation.

In conjunction with the campaign, a BCI-sponsored bat exhibit at the Cultural Center of Tamaulipas was seen by some 15,000 people, including the state’s governor and secretary of ecology. Moreno also reached a number of environmental educators at a wildlife symposium and generated positive publicity about the campaign in articles that appeared in all the area’s leading newspapers, including a major story in El Norte, the most widely read paper in northern Mexico.

As a result of these efforts, two important free-tailed bat caves are now being protected as special nature reserves, and Moreno is seeking protection for others. Such an impressive outcome demonstrates the value of both education and publicity of the issues. BCI will continue to assist with such efforts. 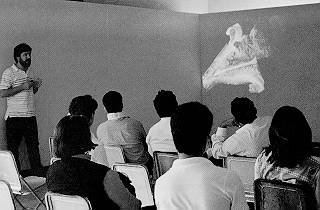