IN MAY, WE RECEIVED SIX RARE PRINTS from the collection of Tom Bennett, a BCI member who died unexpectedly in February 1995. They were sent by Tom’s colleague, Michael Tedrick, who was inspired by the commitment to bat conservation revealed in his friend’s personal papers.

Tom first learned to appreciate bats while spelunking as a child in Kentucky. Family members recall that, "Thomas was always fascinated with bats. . . . He used to love to watch them swarm at the mouths of caves . . ." Later, Tom’s interest was manifested in his collection of bat drawings. Of note are the beautifully colored works of Albertus Seba, an 18th-century German apothecary.

These early scientific sketches symbolize perfectly Tom’s understanding of wildlife. As Michael writes of Tom, "He was a naturalist and fly fisherman, collector of butterflies, insects, and seashells. He believed that bats are extraordinarily misunderstood. He wanted people to view them not as mythology has portrayed them, but as they really are–hardworking allies and essentially shy creatures that deserve to be appreciated and protected."

We are saddened by the loss of such an ardent friend of bats, but we are heartened by the generosity of this gift. 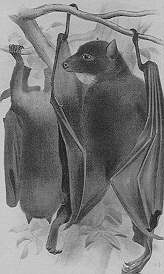