In late 1981, as Bat Conservation International was just forming, the organization’s first foreign field expedition was already underway in Thailand. Merlin Tuttle, who founded BCI, was there investigating the status of Bumblebee bats (Craseonycteris thonglongyai). He had been alerted that they were rapidly declining and likely in need of protection as an endangered species. Found only in Thailand, the Bumblebee bat is the world’s smallest mammal and has recently been declared one of the world’s ten most endangered animals. Much of Thailand’s unique wildlife is now threatened, since it has lost most of its lowland rain forest in just the past decade.

When Tuttle asked for a field assistant who spoke both Thai and English, he was introduced to Surapon Duangkhae, a young Thai who had just completed college. Together they logged many miles on the trail of the Bumblebee bat, also on the lookout for tigers, leopards, king cobras, and in some areas, even guerrillas and armed poachers. Through Surapon’s diplomatic skills, they actually met with the poachers, learning that such activities, especially for the restaurant trade, had far more serious consequences for local bat populations than was formerly understood.

At that time very little was known about the ecology and behavior of Thailand’s bats or their conservation needs. As Tuttle’s field assistant, Surapon became enthused about bats and conservation, also learning all he could about photographing them. Following the expedition, he proposed to do his Masters thesis on the behavior and ecology of Bumblebee bats and requested BCI assistance and support for his research. The Animal Research and Conservation Center of the New York Zoological Society generously granted BCI’s request for funds to support Surapon’s study, and he received a master’s degree in environmental biology at Mahidol University in Bangkok in 1986. He is now Thailand’s leading authority on bats.

Surapon’s first popular article on bats was accompanied by Tuttle’s photographs and appeared in a major Thai magazine in 1983. He has since utilized television, radio, newspapers and the country’s leading magazines to continue his efforts on behalf of bats, in particular, and conservation in general. He also lectures to university students throughout the country.

In addition to being a persuasive writer, Surapon now takes all of his own pictures. Lacking adequate financial resources to purchase equipment, he made an infrared triggering device at home, using special wiring techniques to utilize small electronic flashes that many photographers would consider hopelessly inadequate. But some of the first photographs of Bumblebee bats in flight in the wild were the result. These tiny bats, weighing less than a penny, are rapid fliers and exceptionally difficult to photograph even under the best of circumstances.

Surapon currently serves as Projects Manager for the Wildlife Fund of Thailand, overseeing all conservation projects for the country. Some of his recent accomplishments include saving a colony of several hundred thousand insectivorous bats that occupy the attic of the National Museum in Bangkok, and gaining protected status for Lyle’s flying foxes (Pteropusò ölylei). Only a few of Thailand’s large flying foxes remain, and they are under increasing threat from commercial exporters.
This summer Surapon visited the United States to attend a month-long seminar on developing support for international conservation. On his way back to Thailand, he spent two days at BCI’s headquarters in Austin obtaining additional advice. The efforts of young conservationists such as Surapon are having major impact on international conservation. BCI is particularly proud to have helped him get started. 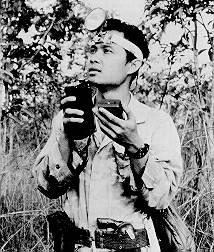 In the field in Thailand, Surapon Duangkhae is alert to the possibility of everything from bats to cobras.