New studies indicate that bats are even more important to desert ecosystems in tropical and subtropical regions than previously suspected. Researchers who presented papers this spring at a special symposium, “Succulent Plants and Their Biotic Relationships,” concurred that both pollination and seed dispersal by bats play a key role in shaping desert ecosystems from the American Southwest to Peru and Venezuela.

The symposium was jointly sponsored by BCI, the Botanical Gardens Conservation Center, the IUCN Species Survival Commission, and the Pew Scholars Program. Held at the Desert Botanical Gardens in Phoenix, Arizona, the symposium was part of the week-long 22nd Annual Congress of the International Organization for Succulent Plant Study. It was attended by 150 scientists from 25 countries and was the first such symposium to focus primarily on the relationship between bats and giant columnar cacti and agaves. Merlin Tuttle presented the evening keynote lecture.

Several of the principal papers were the result of BCI-sponsored projects. Dr. Ted Fleming presented the latest results of his field studies in Mexico, part of BCI’s Sonoran Desert Bat-Cactus Project [BATS, Fall 1989, Winter 1991], showing how the diet and migratory behavior of endangered lesser long-nosed bats (Leptonycteris curasoae) are highly dependent upon the blooming schedules of certain species of cacti and agaves and, in turn, how dependent the cacti are upon bats for pollination.

Catherine Sahley, whose field work is also being sponsored by BCI, presented a paper on the highly specialized and rare nectar-feeding bats, Platalina genovensium, and their relationship with columnar cacti in the arid Pacific coastal zone of Peru. Other papers stressed how much columnar cacti also rely on bats for seed dispersal, the first time this relationship has been documented. Nine of the fourteen papers presented in the special symposium addressed the importance of bats to desert ecosystems.

Scientists expressed concern that some of the species that are critically important to desert ecosystems are endangered and called upon Congress to strengthen the Endangered Species Act, which will soon be up for reauthorization. Several bats that pollinate desert flowers migrate between the United States and Mexico, where they are killed in misguided attempts to control vampires and also where wild agaves, a primary food plant, are illegally over-harvested for mescal production. Decline in the number of bats threatens desert ecosystems on both sides of the border.

“Loss of species diversity is kind of like popping rivets on a plane,” Tuttle told the lecture audience. “We know we can lose some species to extinction, probably without harm to mankind or life on Earth. But, we don’t know how many we can lose.” 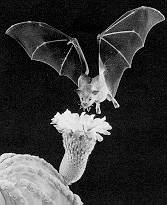 New research presented at the conference revealed that bats are even more vital to desert ecosystems than previously understood.