Verne R. Read, Chairman of BCI’s Board of Trustees, received a 1989 Chevron Conservation Award for his efforts to establish a national park in American Samoa (BATS, Winter 1988). The award was presented at a banquet in Washington, D.C. on May 17.

Read played a major role in garnering the support of Congressional leaders and Samoan tribal and political leaders which led to Ronald Reagan signing the bill on November 1, 1988 to establish a park. The protected area is home to the Samoan flying fox (Pteropus samoensis) and many other animals and plants unique to the islands. Over the past several years, Read and his wife, Marion, helped fund BCI’s expeditions to American Samoa to assess flying fox conservation needs. They also contributed many hours in the field. Read’s support and persistence with members of Congress were instrumental in BCI’s successful efforts to have the bill signed before the 100th Congress ended last year.

Verne Read first became interested in bat conservation more than 10 years ago when he phoned Merlin Tuttle, then Curator of Mammals at the Milwaukee Public Museum, for advice on bats living in a wall of his summer home. At first he viewed the bats as a nuisance problem, but Tuttle convinced him to let them stay. Read has been a friend of bats ever since. In 1982 he became BCI’s first Board member and helped the new organization become established through generous personal assistance as well as grants from The Chapman Foundation. The Reads also funded BCI’s first expedition to Thailand to investigate the status of the rare Bumblebee bat (Craseonycteris thonglongyai). Verne Read exemplifies the significant and positive impact that individuals can have on conservation efforts.

The Conservation Awards Program is the oldest privately sponsored program of its kind in the United States. It was founded 35 years ago by Ed Zern, a prominent outdoor writer and conservationist. Chevron has hosted the award since 1986. Twenty-one individuals and five organizations receive the award each year.

The goal of the Program is to encourage and reward individuals and organizations who devote themselves to the conservation of our natural resources and enhancement of the environment. Says Zern, who continues to direct and guide the Program, “These people represent an unbroken commitment to conservation and symbolize the very best in our society. Through their work, which often goes unnoticed, the quality of our environment and the quality of life have been improved significantly for us all.” BCI is extremely proud of Verne Read’s accomplishments. 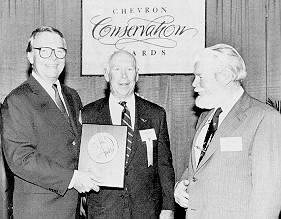