Perseverance paid off when an outdated law doomed an important bat hibernation site in Quebec . . .

At nine in the morning , October 11, 1992, trucks rolled up and unloaded steel reinforcing bars, concrete mixers, and wooden forms at the entrance to the Capelton Mine, about 100 miles east of Montreal, Canada. By four o’clock that afternoon the job was done: the last two entrances to the Capelton Mine lay beneath about six inches of reinforced concrete.

I had just begun to study bats at the Capelton in August 1992, barely two months before the mine was sealed. Our initial results indicated that, as is the case with so many other mines, the Capelton was an important regional hibernation site for bats. But even more interesting was the fact that the fall swarming population appeared to be dominated by the eastern long-eared bat (Myotis septentrionalis).

Bats about to enter hibernation form large swarms each fall as they begin visiting mines or caves to mate and to scout out potential overwintering sites. In eastern Canada, the swarming population is typically dominated by little brown bats (M. lucifugus), with eastern long-eared bats rarely amounting to more than 10 percent of captures. However, at the Capelton, long-eared bats accounted for over 90 percent of all bats captured in August.

The Capelton Mine had been one of the major copper producers of the Northeast between the mid-1800s and the turn of the century. Abandoned in the 1920s, its 20 miles of tunnels reach down almost 11,000 feet, at one time making it the world’s deepest mine. By autumn of 1992, the once-rich mine was merely considered a public hazard.

In sealing the remaining entrances, the land owner was responding to an order issued by the Quebec Ministry of Energy and Resources (MER). And the MER in turn was applying a Quebec law, written in the early 1900s, that required all abandoned mines to be sealed if they represented a significant threat to public safety. The law stipulated that the only acceptable method to ensure permanent closure was to pour a slab of reinforced concrete over the entrance.

Knowing that the MER planned to close some mines in my study area, I had written a letter outlining my findings at the Capelton and suggesting that the mine be gated rather than completely sealed. I provided information on the importance of hibernation sites to bat populations and on the construction of gates. So when I later learned that the MER had forced the land owner to seal the mine, using the primitive concrete slab technique, and without any regard to the bats, I was angry. In early October bats were in the process of moving into the mine to hibernate.

To try to get the MER to reopen the mine, I joined forces with some local spelunkers who wanted it open as a historical site, demonstrating mineralogy and early mining techniques. We decided to take the issue directly to the public. At the time, I believed that people would be unlikely to respond to a bat problem, but might be sensitive to historical or cultural arguments. In our communiqué to local papers and television stations, however, we covered all the reasons for reopening the mine, including the bats.

The response was immediate. Within 24 hours, I was interviewed on two local prime-time news programs, and local newspapers began running articles over the next several days. To my surprise, all of the publicity focused on the urgent plight of the bats that would die unless the mine was opened. News stories also discussed gating as a safe, economic, and environmentally sound approach to ensuring public safety. In addition, they pointed out that sealing mines was probably contrary to the Wildlife Protection Act.

Naively thinking that the battle was now won, and that the MER would embrace the conservation issue and modify their approach to mine closures, I recontacted the Director of Mines. The response was firm: the law dictated that abandoned mines were to be shut, and it stipulated that it be done with a reinforced concrete slab. If I wanted to explore the legality of this law, I was welcome to do it. Until then, the MER would continue to apply the law as written.

After the positive response from the media and the public, I was discouraged by the MER’s refusal to allow what appeared to be a logical change in policy. Trained as a biologist, I had no experience in either legal or political matters and discovered that, in any case, legal advice was difficult to obtain and I would have to cover all costs myself. I was at the point of abandoning the issue, but encouragement from my wife convinced me to persevere. “If those with education, knowledge, and public credibility won’t become involved,” she pleaded, “then how can we expect our society to change?”

I continued to supply the press with information on bat ecology and gating as a means of protecting both the public and bat populations. A total of eight articles appeared in the regional press explaining the problem and calling for a change in policy. I also convinced a reporter focusing on environmental issues to discuss it on French Radio Canada, Quebec’s main network.

After four days of intense province-wide exposure, the MER telephoned me to announce that, in this case, due to a conflict between their law and the Wildlife Protection Act, the Capelton Mine would be re-opened to bats. Furthermore, they would incorporate bat gates into their future plans for mine closure.

This experience taught me several important lessons in environmental activism. If I had given up, the Capelton Mine would have remained shut, and mines would continue to be sealed without the public ever being aware of their importance to bats. As a bat researcher and university professor, I had a responsibility to speak out and the credibility required to convince the public and the government that a policy was outdated and unnecessarily harmful to wildlife.

I also learned that laws are not inviolate, particularly when public pressure is strong. The law that forced the MER to seal mines with concrete slabs was open to interpretation after all. In the end, public opinion, channeled through the media, accomplished what legal action may well not have. Finally, I learned that old myths about bats are dying fast, at least in my part of the world. I was astounded to see that not only the press, but also the public, responded positively to the plight of these bats. When provided with sufficient information, people found bats worth saving.

As it now stands, Quebec’s Mine Closure Act is clearly short-sighted for not taking into account the known importance of mines as hibernation sites for bats. Closing sites critical to hibernating bats could have an impact not just locally, but regionally as well, since bats may migrate hundreds of miles to overwinter.

Environmental issues, and certainly bat conservation, were not matters of public concern when the law was written in the early 1900s. Although we are a lot better educated now, we still have a long way to go. Change requires people who care, become involved, and will not give up. The law has not been rewritten yet, but I believe that it is well on the way to being changed in Quebec. 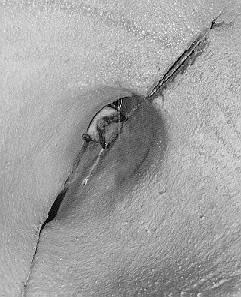 Never considered an abundant species, eastern long-eared bats appear to require cooler hibernation sites than the more common little brown bat. Sites such as Quebec’s Capelton Mine are especially important to their survival over a broad geographical area.