The multiple uses of bats in magic and folk medicine are clear testament to the fertility of the human imagination. . .

Linking bats to witchcraft and magic has given rise to many of the fears people have about bats. Today in the United States, we see this association in Halloween decorations, horror movies, and scary novels, but it reaches back into antiquity and is found in many parts of the world. Throughout history, bats have often been considered the familiars or even the alter egos of witches.

In 1332, Lady Jacaume of Bayonne in France was publicly burned because “crowds of bats” were seen about her house and garden. Shakespeare invoked bats and witches in several of his plays. The “wool of bat” in the brew of Macbeth‘s three witches is a prominent example of the association, as is Caliban’s curse on Prospero in The Tempest: “All the charms of Sycorax, toads, beetles and bats, light on you.”

The use of bats in witchcraft survives even in modern times. As recently as 1957, a California taxidermist sold bat blood, presumably for witchcraft. Other contemporary references include a report from Ohio claiming that bat blood can call evil spirits, and another from Illinois asserting that it gives witches “the power to do anything.” There are also reports of bats used for witchcraft in Mexico’s Yucatan, and bat wings are often in the conjure bags of African-Americans in Georgia.

But not all myths bring to mind frightening acts; some ascribe wondrous magical properties to bats and associate good luck with them. Unfortunately for the bat, most of them require its demise. An ancient belief found both in the American Midwest and the Caribbean is that bathing your eyes in bat blood will allow you to see in the dark. Many other beliefs suggest that bats have the power to make people invisible. While collecting small samples of bat blood in Trinidad, West Indies (for use in genetics research, I might add), a Trinidadian told me that if I drank the blood I would become invisible. Tyrolean gypsies have a similar belief, claiming that carrying the left eye of a bat will accomplish the feat. In Oklahoma carrying the right eye of a bat pierced with a brass pin will have the same effect, while in Brazil a person carrying the hearts of a bat, a frog, and a black hen will become invisible.

Bat magic can also be an antidote to sleepiness. In both ancient Greece and Rome, it was believed that you could prevent sleep either if you placed the engraved figure of a bat under your pillow, or if you tied the head of a bat in a black bag and laid it near your left arm. In many parts of Europe, a practice said to ensure not only wakefulness, but also to protect livestock and prevent misfortune is to nail live bats head down above doorways. Not for the faint of heart, this practice was reported as recently as 1922 in Sussex, England and may indeed continue today. Canadian Indians relate that bat “medicine” can also bring about the opposite effect of staying awake; traditions claim that placing the head or dried intestines of a bat in an infant’s cradle will cause the baby to sleep all day. In a similar vein, Mescalero Apaches believe that the skin of a bat attached to the head of a cradle will protect a baby from becoming frightened.

Bats have also been said to induce love or desire. In Roman antiquity, Pliny maintained that a man could stimulate a woman’s desire by placing a clot of bat blood under her pillow. In Texas, one lovesick suitor was told to place a bat on an anthill until all its flesh was removed, wear its “wishbone” around his neck, pulverize the remaining bones, mix them with vodka, and give the drink to his beloved. A similar love potion from Europe recommends mixing dried, powdered bat in the woman’s beer.

Bat hearts or bones are often carried as good luck charms. Variations on a belief that apparently began in Germany, and have been repeated in the United States, predict that bats bring good luck at cards or lotteries. The prescription is to wrap a bat’s heart in a silk handkerchief or red ribbon and keep it in a wallet or pocket, or tie it to the hand used for dealing cards. Some also believe that tying a silk string around a bat’s heart will bring money.

Another superstition from Germany relates that bullets from a gun swabbed with a bat’s heart will always hit their target. According to the Egyptian Secrets, attributed to Albertus Magnus in the 13th century, mixing lead shot with the heart or liver of a bat will have the same result. Some American Ozark pioneers had another variation of this belief: they carried the dried, powdered hearts of bats to protect them from being shot and to keep wounded men from bleeding to death.

It is common in folklore that the desired effect of a potion or medicinal preparation reflects real or imagined characteristics of the ingredients. (We’ve heard about cannibals eating the heart of a valiant but vanquished foe to obtain the foe’s courage.) It is also common that the desired effect of a potion can be the opposite of the characteristics perceived in their ingredients. It is easy, therefore, to imagine the motivations for some bat preparations thought to cure various maladies.

The association of bats with human hair (BATS, Summer 1992) is seen here too. Many beliefs in Europe and the United States relate the value of bats’ blood, or their excrement, as a depilatory. But in England and North Carolina the use of bats’ blood has been advocated to prevent baldness. In India, using a hair wash of crushed bat wings in coconut oil is said to prevent both baldness and graying of hair.

Medicinal preparations using bats are legion and have been recommended for many other maladies. Folk healers prescribe a large variety of bat preparations for problems with vision, ranging from dimness to cataracts. Other bat folk medicines are said to be remedies for snakebite, asthma, tumors, sciatica, fevers, a painless childbirth, or to promote lactation. Sir Theodore Mayerne, who lived in the 15th century, prescribed “balsam of bat” as an ointment for hypochondriacs, his recipe consisting of “adders, bats, suckling whelps, earthworms, hogs’ grease, stag marrow, and the thigh bone of an ox.” In the 1700s one physician recommended that, properly prepared, the flesh of bat was good for gout. Folklore from Brazil suggests taking dried, powdered bat as a remedy for epilepsy. In more modern times, Texas folklore advocates drinking bat blood to cure rheumatism and consumption, and asserts that rubbing warts with a bat’s left eye will remove them.

We can trace many of the folk remedies and magical properties ascribed to bats directly to their physical features and lifestyles. Wakefulness at night or sleeping all day are well-known characteristics of bats. Although none are blind (except by injury or congenital defect) and most have good vision, “blind as a bat” is still a commonly heard phrase, and many people believe it. But before the discovery in the 1930s that most bats use echolocation to navigate both at night and in total darkness, many people were convinced that bats not only had excellent vision, but that they could actually see in the dark. The use of bats to treat ailments of vision is therefore not surprising.

The extensive folk association of bats with hair can likewise explain their use as a depilatory or for preventing baldness. A less likely possibility is that bats are believed to promote lactation because, for their size, lactating female bats can produce a truly prodigious supply of milk for their young. Perhaps even more fanciful is that the 18th century doctor might have imagined bats to be a remedy for gout because they rest with their feet above their heads.

Obviously, the origins of many bat folk medicines are extremely, if not completely, obscure. Why should bats cure tumors, help hypochondriacs, or induce love? (In colonial North Carolina, eating roast bat was a recommended cure for children who ate dirt. Where did that one come from?)

Linking bats with witchcraft and magic, and ascribing other mystical powers and properties to them has certainly contributed to our apprehension about such seemingly strange and miraculous creatures. However, as we learn more and more about bats, we find that the truth is, in many ways, more miraculous than the legends.

[bio]
Gary McCracken is a professor in the Department of Zoology and the Graduate Programs in Ecology and Ethology at the University of Tennessee, Knoxville. He has studied bats for many years and is author of the entry on bats in The Encyclopedia of American Folklore and Superstition.

NEXT: Bats in belfries and other places

EDITOR’S NOTE: Readers are invited, indeed encouraged, to send any additional bat folklore–on any topic–from their own region. While this series focuses primarily on American and European folklore, the author would like to hear from all cultures, worldwide. The final installment in this series will be devoted to what we learn from you. Please send stories, and as much information as is known about their origins, to BATS Editor at Bat Conservation International. 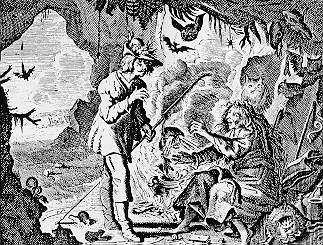 Magical properties have been ascribed to bats in the folklore of many cultures. A consultation with a witch often resulted in the prescription of a complex potion, containing some part of a bat, to cure various afflictions from disease to lovesickness.