Chinese art abounds with bats. They fly from the folds of fabrics and chase each other across the finest china. Jade bats adorn jewelry, and golden bats grace the most ornate altar cloths. Tapestries and toys, scepters, saddles and sashes, and many other objects are likely to be decorated with beautiful bats. While European and early-American artists used bats and bat wings to depict devils and demons, the Chinese embellished their cherished artifacts with the same winged mammals many Westerners find repulsive.

Those who were taught to dislike bats can learn a great deal from Chinese art. Oriental bat motifs encourage us to view bats more favorably, as objects of beauty. Chinese artists have long used five bats to represent the five blessings: health, long life, prosperity, love of virtue, and a tranquil, natural death. The bats often are bright red— the color of joy. Sometimes they encircle a stylized caligraph known as the prosperity symbol. This popular bat motif often was embroidered on expensive clothing to imply that a person's prosperity had resulted from a virtuous lifestyle.

The Chinese word for bat is "fu," and the word for happiness also is pronounced "fu." Two bats sketched on the wrapping of a gift convey best wishes and good fortune. Two butterflies, symbolic of marital bliss, often accompany bats on presents to newlyweds. Throughout Asian culture, bats continue to evoke strong, positive emotions.

Chinese admiration for bats began thousands of years before Christ. The Oriental world was viewed as an eternal interplay between active (male) and passive (female) forces. Bats were thought to embody the male principle— flowers and fruits, the female. The bat commonly was pictured with the peach, a popular female fertility symbol. We now know that the pairing of peaches and bats portrays an ecological as well as mystical relationship. Peaches (one of man's most popular fruits) were first cultivated in China approximately 5,000 years ago. Before that, peaches relied on bats for dispersal of their seeds.

Ancient scholars thought bats attained very old age because they lived deep in caves and because "they swallowed their breath." While the mystery of bat longevity remains unsolved, researchers have confirmed that bats far outlive other mammals of similar size. In a culture that venerated wisdomed old age, bats became a symbol of these virtues. Bat designs even were used on household shrines honoring deceased relatives. Such usage clearly indicates the high status of bats in the artistic and cultural heritage of China.

(Bio)
Stephen J. Kern was Program Director of Bat Conservation International in 1982-83 when the organization was founded. He also co-authored "Bats and Public Health" with Merlin Tuttle. 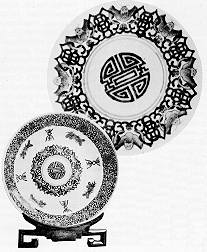 The design of BCI's logo was inspired by Chinese art susch as this pottery. Symbols representing various virtues circle bats that surround the prosperity symbol. PHOTO BY STEPHEN J. KERN.