Some bridges are serving as Noah’s Arks for homeless bats, and many more could do so in the future . . .

America’s bats are desperate for homes, so much so that in my study of bats in bridges, I often find them in open crevices exposed to sun and rain, only an inch below highway traffic. Others use culverts so small that they are easily drowned or caught by predators.

Most of America’s bats lost their original homes in ancient tree cavities as old-growth forests were cut; many others, when caves were disturbed or destroyed. They found refuge by following timber into wooden barns and buildings. In fact, many of our largest, and sometimes only, remaining populations over broad areas now rely exclusively on old structures that may be torn down at any time in the next few years.

Where can these bats go to survive, and what can we do to help them? These questions were pivotal to my study over the past two years of bats in bridges and culverts–the first survey of its kind in the United States, in collaboration with the Texas Department of Transportation (TxDOT). Could these structures provide alternate roosting habitat? The answer is an obvious yes for anyone who has witnessed the spectacular emergence of 1.5 million Mexican free-tailed bats (Tadarida brasiliensis) from Austin’s Congress Avenue bridge [BATS, Summer 1994]. But why is it that some bridges provide homes for hundreds of thousands of bats while most shelter none?

In 1994 I set out to answer this question with the help of Mark Bloschock, a TxDOT bridge design engineer who has now been my research partner and state-agency navigator for three years. In addition, the entire TxDOT bridge design group and many other TxDOT employees contributed their expertise and financial support, often spending long hours of personal time to assist me in the field. For two years, traveling the interstates and back roads of Texas, Mark and I–along with my various assistants, such as biologist Annika Nicklaus of Germany and British bat worker Joan Childs [BATS, Winter 1996]– studied the why’s and where’s of bat-occupied bridges and culverts. We had four primary goals: to document which bat species use highway structures; to clarify where in the state they are using them; to identify the characteristics of roosts bats prefer; and to examine the possi-bilities of attracting bats to new bridges and culverts or to old ones retro-fitted with custom, bat-friendly habitats.

Following leads from BCI members and others, we surveyed numerous known roosts and subsequently discovered many new ones that taught us what bats look for in deciding whether to make a bridge or culvert their home. Although of course I’d love to present every hard-earned statistic from my final report here, I will confine myself to a summary of essential facts.

We visited more than 5,000 structures and recorded data on 1,160 of them in 39 study sites throughout Texas. Although only 0.01 of one percent of all highway structures surveyed offered ideal, protected homes for day-roosting bats, we found that as many as 11 to 12 million bats use Texas bridges and culverts as daytime shelter, and millions more use them for night roosts. We documented 11 of the 33 Texas bat species using bridges or culverts, but we suspect that up to 22 species actually use them. Their uses are many: migratory stopover sites, hibernation sites, day roosts for nursery and bachelor colonies, and most often, night roosts. We believe bats could be encouraged to begin day-roosting in many more bridges and culverts if simply offered safe and suitable conditions.

It soon became obvious that many existing bridges could be dramatically improved for bats through simple modification. To this end, we developed the Texas Bat-Abode (see picture, page 10), as well as a culvert bat-box and concrete bat panels. Many Bat-Abodes and concrete panels had bats in them within a month, but not all units were successful. Site location seemed to be the most important factor, and units placed in bridges with signs of previous night roosting were most likely to succeed.

Our studies led to the conclusion that, at little or no extra cost to taxpayers, it’s possible for transportation departments to include bat-friendly habitat in bridges and culverts. They just have to provide crevices of appropriate size and width during new construction. Standard bridge designs often have crevices formed by expansion joints or seams along segmented pieces. Culverts, although similar in form to caves, are often overlooked as bat-friendly highway habitats. Yet culverts have been found supporting nursery colonies of more than 35,000 cave bats (Myotis velifer) in areas where bat habitat is plentiful but roosts are few, such as the mesquite-wooded plains of South Texas. (Highway departments know which culverts are safe from flooding.)

TxDOT went one step further, asking us to study how the presence of bats in a bridge or culvert affects public safety, workman safety, water quality, structural integrity, and the welfare of the bats. In all cases, when properly managed, bats allowed to remain undisturbed did not put the public or workmen at risk. Further, water quality was not affected, and structural integrity was not altered, even in an old concrete structure known to have been occupied for 70 years. The colony of about 1.5 million bats roosting in Austin’s Congress Avenue bridge offers an excellent demonstration. Water quality beneath the bridge has been unaffected, and since installation of English and Spanish educational signs warning people not to handle grounded bats, not a single health-related incident has occurred in this heavily populated and visited area. Initially perceived as a threat to Austin citizens, the Congress Avenue bridge colony has now become one of the city’s most popular international tourist attractions.

As with any good study, we created more questions than we had the time or resources to answer. These will be addressed as we launch a larger, two-year study at the national level. All states contacted have been cooperative, and we currently have funding partnerships with the Federal Highway Administration and eight state transportation or wildlife conservation departments. In a couple of years’ time, the resulting information will be compiled into a technical bulletin that state highway departments can use as a planning guide for inclusion of bat-friendly habitat where appropriate. Altering even one percent of America’s bridges for bat use could help tens of millions of bats, including endangered species.

If we are merely to survive as a species on this earth, the blending of humans with nature is an inevitable requirement. But if we are to thrive, we must actually promote integration with our natural world. Understanding the role bridges and culverts can play in bat conservation contributes yet another tool for this coexistence with some of our most valuable wildlife allies.

or by contacting the author at BCI,

As with many BCI projects, success was possible only as a result of contributions from organizations such as the Winslow Foundation, the Texas Department of Transportation, the National Fish and Wildlife Foundation, the Margaret Cullinan Wray Foundation, and many private individuals. We also are indebted to volunteers Joan Childs, Annika Nicklaus, Andy Moore, and Len Carlton.

Bat Preferences as Determined by the Texas Bats and Bridges Project

•Central Texas bridges made of concrete that have vertical crevices three-quarters to one inch wide and at least 12 inches deep, and that are more than 10 feet above ground and covered at the top, have a 94 percent chance of being occupied by bats as day roosts.

•Many bat species prefer crevices that are warmer than ambient temperatures and positioned high on the bridge. Spaces as narrow as half an inch are often used, especially by the smallest species. 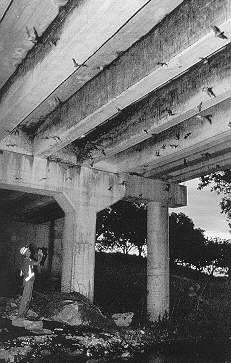 The author observes the evening emergence of a colony of Mexican free-tailed bats from their daytime roost under a bridge in Central Texas. 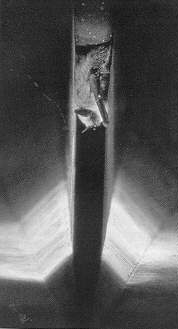 A fringe-tailed myotis (Myotis thysanodes) peers out from the safety of its crevice under a bridge. Crevices such as this often extend the entire length of a bridge and can be deep enough to fit several bats one on top of the other. 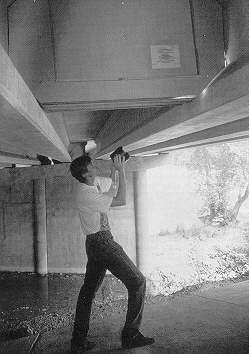 The author checks to see how many bats are roosting in the crevices of one of his Texas Bat Abodes, an inexpensive, plywood bat house he designed to create roosting spaces beneath bridges that don’t already shelter bats.