Folklore about bats in buildings most often portends doom— a reflection, perhaps, on the way many cultures have viewed bats through the centuries. . .

The average family’s most intimate experience with a bat is likely to occur when they encounter one clinging to an outside wall of their house, see one under the eaves, or–more dramatically–when a bat actually flies into their living quarters. A profusion of fables and folklore has developed around seeing bats in buildings, but these tales have little to do with the habits of real bats or the concerns people may have when they encounter a bat in their house.*

As we shall see, much of this mythology is dark, centered on the belief that the bat represents an evil spirit or the devil itself. A bat’s sudden appearance in a building, therefore, portends grave misfortune ranging from death to illness or just plain bad luck. The most frequently repeated myth is that a bat’s presence in a house foretells someone’s death. There are many variations on this theme specifying who will die, when, and whether the death can be avoided.

Folklore from Nova Scotia relates that if the bat alights in the house, a man in the family will die, whereas if it flies around, a woman’s death is foretold. If someone in the house is sick, they will die, but this can be avoided if a handful of salt is thrown into the fire. A woman from California stated that if a pregnant woman sees a bat, her child will die. Other myths are that bats in a house indicate the death of a parent or of a very good friend. Folklore from Illinois asserts that if a bat enters a house and stays for a long time, there will be a death in the house, but if it does not stay long, a relative will die. In New Mexico lore, the death will occur within eight days, while myths from the midwestern United States state that the death will occur either in a month, or within six months. Myth from Washington specifies that death will occur within a year.

Many legends say that the bat does not even have to enter the house or the actual living quarters to be a harbinger of death. Myths from Slovinian, German, and Jewish immigrants relate that bats in an attic foretell a death in the house. From numerous places and ethnic groups we’re also told that a bat simply flying over a house, or at a window, or down a chimney can mean death. From western New York comes a tale that claims if a bat flies around a house while a dog is howling, it is a sure sign of death for someone in the house. An Arkansas myth says that dreaming about bats flying in your house will mean the death of a dear friend.

Some folklore asserts that mortal consequences can be averted, but in typical fashion, there are other myths to contradict this. More contemporary beliefs are related by a man in Las Vegas and a woman from Tacoma who both claim that death could be prevented simply by killing the bat. But beliefs from the Midwest predict exactly the opposite, foretelling a person’s death only if the bat is killed, and just sickness if the bat escapes. In Ohio, a woman of Scottish ancestry related that when a bat flies in a doorway, a person can avoid serious illness by drinking a mixture of his or her burned hair and coffee [see “Bats and Human Hair,” BATS, Summer 1992, for more uses of this remedy]. From Arkansas comes a report on how to avoid the issue altogether; it claims that placing a horseshoe in the fireplace will scare bats away.

Bats in buildings have also been seen as omens of lesser evils than death. Various myths relate that bats in houses may bring bad luck, or portend that someone in the house will go insane, become blind, be missing the next day, that a letter with bad news will arrive, or that the people in the house will move. Zuni Indian myths, along with lore from North Carolina, Arkansas, and Illinois, all corroborate that bats flying around a chimney, or attempting to enter a building, are a sure sign of rain.

While of less consequence than death, woe be it to the bridal couple who has the misfortune to marry in a church with bats in the belfry. A great deal of very bad luck is predicted if a bat flies into the church during a wedding ceremony.

While European and North American folklore about bats in buildings generally views bats as portents of misfortune or evil, some benign lore also exists perceiving them as good omens. For example, if a bat lives in a theater, and flies over the stage during rehearsal, the play is guaranteed success. A contemporary local story comes from Indians in California who relate that a bat flying in a house foretells a good hunting season. And finally, miners working in the mountains of Nevada insist that a mine will be safe if a bat remains in the mineshaft after blasting.

Other cultures also view bats in a human dwelling as a good omen. Merlin Tuttle relates that in his research in the northern and western part of Kenya, the Nandi and Lugen peoples welcome bats into their homes as bringers of good luck. Their presence is thought to help increase wealth and make livestock reproductively prolific. But even within the same country and region, views can contrast sharply. The Kisii people of western Kenya are said to very fearful of bats, sometimes abandoning their homes if bats enter, fearing ill health and death of their children.

Other European and North American myths give a positive interpretation of bats in houses, but as is often the case in folklore, the death of the bat–sometimes in a rather gruesome ritual–is usually required to interpret the bat as a good sign.

A recent story comes from a woman in Illinois who related that if a bat enters a house that has a small baby inside, the child will cut teeth better if the bat is killed and its carcass is kept overnight in the house. She said that her family did this when a bat entered her daughter’s house, and that her grandchild “didn’t have any trouble when cutting teeth.” Lore from Montreal, Canada, relates that a bat flying into a house will bring financial prosperity to the household, but only if the bat is caught and allowed to die after its hind legs have been cut off. Once the poor animal is dead, its legs must be buried at least a foot deep in the back yard.

One very widespread myth about bats in houses, however, has nothing to do with bad–or good–omens. There is a persistent belief that bats enter your house to steal food. One of the most common traditional beliefs about bats in houses, repeated throughout Europe and by immigrants in North America, is that bats are extremely fond of fat. The lore states that they will gnaw on hams and slabs of bacon, which in former times were hung to cure in chimneys and well-ventilated rooms–places where bats were often discovered roosting.

This belief is reflected in a German word for bat (speckmaus, speck being the German word for bacon), and also in period illustrations and nursery rhymes. Bats were clearly getting the blame for other animal thieves; in his 1939 book, Bats, G.M. Allen speculates that rats were the true predators. It also seems probable that birds, which people often purposely attract by hanging suet, may have been among the real culprits. Allen describes experiments conducted in Germany in the early nineteenth century in which captive bats were offered a diet of bacon but refused it and starved to death.

If you keep in mind that bats were viewed as evil spirits, or even the devil, it is not difficult to understand why folklore about them appearing in one’s own home focuses largely on death, illness, and misfortune. Also, we should appreciate that in earlier times, houses were much more than good investments and income tax breaks; they were a person’s safe refuge from many very real dangers. The bat, as a devil or evil spirit, was seen as entering this sanctum with malevolent intent. Typically, the devil is after souls, and this accounts for the frequent association of a bat’s appearance in a building with death.

This devil/evil spirit association is specific in many myths. Bats are commonly said to indicate that the house they frequent is haunted, and an old German myth relates that if a bat flies into your house, the devil is after you. But redemption is sometimes possible once a bat enters your home. By killing the bat, one might be able to minimize its evil effects or even gain grace with good forces.

Recognizing the devil/evil spirit association, we can certainly understand why a bat appearing uninvited during a wedding in a church, the Lord’s house, would be seen as an extremely bad omen. Another view is found in African-American folklore, which relates that if a bat enters your house and leaves without staying long, it is because the evil spirits did not feel welcome.

With the plethora of myths handed down from so many cultures, perhaps we can come to understand some of the often irrational fears and behavior people exhibit when confronted with the presence of a small, harmless (and likely terrified) bat in their home.

[bio]
Gary F. McCracken is a professor in the Department of Zoology and the Graduate Programs in Ecology and Ethology at the University of Tennessee, Knoxville. He has studied bats for many years and is author of the entry on bats in The Encyclopedia of American Folklore and Superstition.

Next: Bats and the Netherworld

Bats likely have been entering buildings for as long as people have been building them. Not surprisingly, much folklore attempts to interpret the meaning of these visitations. 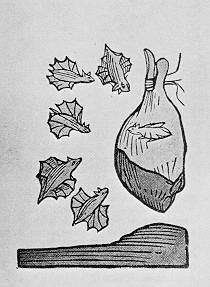 As this 1491 woodcut depicts, European tradition held that bats entered buildings only to eat the hams and bacon that people formerly kept in chimneys or well-aired upstairs rooms. Although the belief persists, no evidence exists that bats eat ham or bacon.